@Barnaby_Joyce states the case for Labor’s media merger ‘public interest test’: How will the Nats vote? 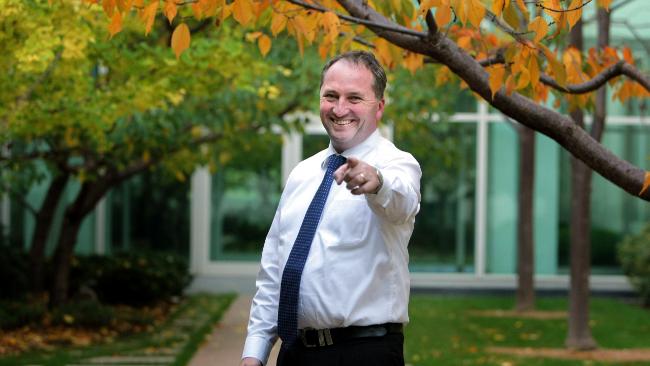 Barnaby Joyce: We need YOU to talk to your local MP. Picture: Kym Smith

The National Party has long opposed further media domination by Rupert Murdoch, as detailed in the two media policy chapters in my book. It fought against John Howard’s weakening of media concentration laws to facilitate Murdoch expansion, and Barnaby Joyce actually crossed the floor in 2006 to vote for his amendment to limit the damage of Howard’s legislation. Guess what he wanted – a public interest test for big media mergers! And that is what the ALP has proposed.

So, now that Labor wants to pass a modest roll-back of Howard’s laws to allow the Media Advocate to stop very, very big media – ie Murdoch – gobbling up even more players if it is not in the public interest, where do the Nats stand?

Apparently the MSM hasn’t bothered to look into the Coalition’s opposition to the two contentious Labor bills – media diversity and tougher self-regulation. Does no-one in the press gallery have a memory? (By the way, there used to be Liberals who cared about media diversity too, but they are long dis-endorsed or silenced; you can read about them in my book too).

So, to encourage the Gallery to do some work, here is a media release and a speech in 2006 by Barnaby explaining the reasons for his stand. Perhaps someone in the Press Gallery – anyone – might care to seek his opinion now?

Nationals Senator for Queensland, Senator Barnaby Joyce has stated “Though not the highest profile issue, the proposed changes to media ownership laws are probably one of the most important. Decisions made now will have ramifications for the future concentration of media and the roll out of new technology.

“The Queensland Nationals have long recognised the issue and their concerns were reflected in the unanimous resolution, at State Conference, to protect local journalism and stop the overcentralisation of views which can only be to the detriment of democratic process. The Nationals have pursued this purpose since State Conference and, with work conducted by Nationals’ Senators, have pursued these concerns through the recent Senate Inquiry.

“A major concern with cross media remains the over centralisation of the media market and the lack of capacity of the ACCC to have effective oversight of media mergers and their effect on the democratic process of our nation. The ACCC has no powers to be, nor was it set up to be the arbiter and protector of a diversity of public opinion.

“I share the view of the Productivity Commission, noted in its report on broadcasting, that the introduction of a public interest test, with particular emphasis on diversity of political and public opinion, in relation to media mergers or acquisitions, must be a central feature of any media reforms.

“Working through the processes of the Senate and with the Minister, the Nationals will do their very best to come up with the best mechanism to protect diversity in light of the intention of the Minister to achieve passage of this Bill.” Senator Joyce said.

An explanation of 2 issues, cross media ownership and the merger and acquisitions process

18 October, 2006
Here is a brief explanation of a complex agenda which is currently in train in Canberra. This is an explanation of two issues, cross media ownership and the mergers and acquisitions process, as laid out in the Trade Practices Amendment Bill (no.1). This is a discussion on how they are linked.

Here is a brief explanation of a complex agenda which is currently in train in Canberra. This is an explanation of two issues, cross media ownership and the mergers and acquisitions process, as laid out in the Trade Practices Amendment Bill (no.1). This is a discussion on how they are linked.

The cross media ownership laws have brought a major change in the dynamic in the Australian media landscape and we are now seeing the centralisation of media. This may bring the associated loss of wide ranging critical assessment of the affairs of our nation. Unfortunately, I failed in amendments that would have brought better control to this process and, it is history that Family First failed to support the only resolution where a tied vote could have excised the cross media section of the bill.

The only factor that can mitigate this process is the role of the ACCC. Unfortunately, there is now the amendment before the Parliament which will restrict the ACCC process of approval to only 40 days, an impossible task in complex mergers. This will remove the process of approval from the ACCC and that dynamic will predominantly be moved to the Australian Competition Tribunal, a judicial body in which the answer is almost exclusively ‘yes’ or ‘no’, without condition. The ACCC asks for conditions such as “you can not buy that unless you sell this”. Now, the ACCC will have to say ‘no’ after 40 days and the process moves on to the Australian Competition Tribunal.

The Australian Competition Tribunal will ask the question ‘does this merger/takeover mean that the new entity can raise prices without losing customers?’ If the answer is ‘no’, the merger/takeover goes through. The only thing this test, in the Australian Competition Tribunal, will stop is virtual monopolies. It has nothing to do with the diversity of views.

What is lost if the media landscape is centralised? Well, do you completely trust, without wide external review, the operation of the Parliament? I would suggest the media, which controls opinion in the nation, is at times more powerful than the Parliament because it determines how you perceive parties and Parliamentarians. In reading this, how are your opinions being affected or are you now forming new ones? How do you know what you have not been told, and where do you get that knowledge?

Media, as a group, can be more powerful than Parliament because it delivers the message that elects governments. We are protected by the fact that this group is diverse and uncoordinated in its approach. It goes beyond just the commercial market aspects of overcentralisation as to why it should remain so.

Where was the debate on this issue, cross media legislation, when it should have been the leading issue of the nation’s Dailies, TV and radio? It was the biggest domestic policy change and deserved far greater coverage as it affects the democratic process. This lack of coverage does not auger well as an indicator of coverage of other issues, in the future, in which the media houses or their major shareholders may have a vested interest.

Where will the interests of the major shareholders in an overcentralised media market be registered? If the major shareholders in the future of the two major media houses were private equity firms, for which there is no real register of ownership, how could you be certain they would not exert their issues or agendas on editorial content? The only real protection we have had in the past is that there were too many media organisations to control and the alternate view was likely to get out. Now, maybe not.

In the past, and in the future, media has been very active in picking winners and, I do believe, their choice has been affected by the proposed policy platforms of the party and how they align to their own company’s parochial interests.

Remember, we reflect the views of the public in a democracy. We try to do this more than not as it helps us stay elected. But how do you, the public, make your judgement and where do you get notice of the key issues on which you report back to us in that little white box in your local school or hall on election day? Will you be certain that you have the vast majority of the facts before you on which to make a balanced decision?

Now, back to the Trade Practices Amendment which cuts the time of the ACCC to assess the full implications of these proposed media mergers. Do you feel, with all that is at stake, that 40 days should be all that is allowed for the ACCC to properly assess a merger /takeover, prior to the decision moving to the Australian Competition Tribunal? The answer will be ‘yes’ or ‘no’ on the substantial lessening of competition test when the larger issue is the diversity of views in the public. I think it could be reasonably argued that the Australian Competition Tribunal leaves us short.

The assessment of the mergers should remain predominantly with the ACCC and the way to do that is to increase the time the ACCC has to make its assessment as well as increasing the powers of the ACCC to assess the wider public benefit. This may mitigate the likelihood of problems of media centralisation which will occur otherwise.