Where is the wild space in Forde and the environment in Election13, by @StephanieDale22

The suburb is on the south-eastern fringe of the federal Division of Forde, and it is not especially representative of the electorate. Then again I’m not sure any particular pocket of the electorate is representative of any other – just that popular narratives about Logan and Beenleigh are stereotypically so (high unemployment, low household incomes, public housing areas, ‘cultural melting pot’, social disadvantage, crime).

I’m staying in Mt Warren Park for the duration of the election, renting a room in a brick house on a long grassy block that runs all the way down to the Albert River. Every afternoon I go for a walk around the streets, seeking wild places, finding the river but virtually no place to truly wander.

For the 10 candidates standing for the Forde electorate, 2013 is an election built on local issues: jobs, infrastructure, health, education.

‘Infrastructure’ refers primarily to the M1 motorway that carved up the bushland between the Gold Coast and Brisbane, and filled its fringes with ever-burgeoning housing developments. That suburbia is the electorate of Forde – and that road, 10 lanes wide yet regularly slowing 26,000 commuters a day to a sluggish crawl, is key to electoral victory for two reasons: 1. an ample supply of local jobs would relieve traffic congestion (instead of traveling to Brisbane for work, locals could work locally); and 2. in order to meet growing population demands, the road has to be further developed.

For me, there is certain heartbreak in that statement, as there is constant heartbreak wandering about the streets of Mt Warren Park.

For where are the animals?

Where are the wild places?

And where is ‘the environment’ in the 2013 election?

Down a wide grassy strip between the houses on Mt Warren Boulevard lies the river. The grass is freshly mown. Backyard fences mark the boundary between ‘mine’ and ‘ours’. The riverbank is fringed with a mangle of weeds – this is a wild place of Mt Warren Park, urban green space, home to exactly what wild creatures bigger than a gnat, more native than a mouse?

On the southern reach of Mt Warren Boulevard there is a big wall, the kind that might keep traffic noise to a minimum. Native animals painted larger than life on its green aluminium canvas peer at passersby.

Don’t you find that unforgivably ironic?

Standing on the streets in Mt Warren Park, in each direction there is a scrubby hill. I wonder which one is Mt Warren? Whatever the answer, it’s a joke – as any European or New Zealander will tell you Australia doesn’t have mountains. Certainly the small hilltops peering above the rooftops of Mt Warren Park are just that, small hilltops.

The people I’m staying with, who grew up on a dairy farm that once upon a time was just up the river, tell me Mt Warren is the ‘mountain’ laced by Mt Warren Boulevard, a serious artery around the corner from our house that cuts through the suburb. They tell me they ‘must get up there while there’s still some bush’.

I am hankering for a wild place, so on Saturday afternoon I go looking for Mt Warren.

Many, many years ago, driving across the wide flat spaces of the Australian continent, I would look at mountains in the distance and wonder ‘how do you get over there?’

How do you get beyond the fencelines that mark the Earth my home as someone else’s ‘mine’ – and sit by a river, upon a mountain, among warm rocks?

So it is on a Saturday afternoon in Mt Warren Park I wander along Mt Warren Boulevard looking for Mt Warren, peering up every small cul-de-sac looking for open spaces between the houses creeping up the mountainside.

Eventually there is an opening at the end of a short street lined with big houses, and I walk across an open patch of rough-mown grass to meet a wall of lantana. I peer through and beneath to find a trail, bow low to scramble through, and clamber straight up the side of the hill, looking back now and then to keep a close eye on my bearings.

The bush is tinder dry. A thick carpet of leaves crackles beneath my feet. Small twiggy trees snap in my hand. There is no movement around me. Nothing startles. It only takes about 10 minutes to get to the top, where I spill from the bush onto a rough dirt track crawling along the ridgeline. I follow the track, but not before noting a blue-capped water bottle half buried near a log, and a red chip packet on the side of the track a few metres further along – these would be my signposts home, the points at which I’d leave the track and slide down the mountain towards Mt Warren Boulevard. There was a time I would have picked up the rubbish. In the bush, I cannot be sure they are not someone else’s markers also.

I wander along, stung by the absence of non-human life. The track peters out. I sit awhile – a high wire fence nearby marks the mountain’s western fringe, a boulder crusher down below fills the silence. A flood of small black insects hovers around my face. A pair of crows lands in separate trees, calling to each other across the blue sky. They are poor excuse for a bush telegraph; I can only hope they’re broadcasting my presence to unseen non-human life all around.

I slide back down the hill and into surburbia, wandering home again past low-maintenance gardens filled with non edible, non sheltering spiky plants, past driveways filled with urban utes and cheap cars boasting expensive number plates, past sterile lawns and well kept homes – and for the umpteenth time in the last decade, I wonder how it is Australia turned its collective back on our wildlife, our native fauna.

Last night on sundown I went for a drive around the electorate, this time seeking the taller ‘mountain’ to the north-east, the one with the big white golf ball on the top. I drive under the M1 overpass towards Jacobs Well, past signs in wide paddocks advertising new developments. The western horizon is streaked pink, the setting sun a luminous blaze of red. Purple wildflowers sway in the evening light and curious cattle stare when I stop to admire the brown river turning pink with the evening bright.

A local farmer pulls up to feed the cattle and we keep easy company in the dimming of the day.

The sunset reflects a pathway of light along the river. I don’t know which river it is. I could of course ask the farmer but I don’t, I don’t want to know it has a name; preferring instead to imagine it is nameless, a wild river, still. 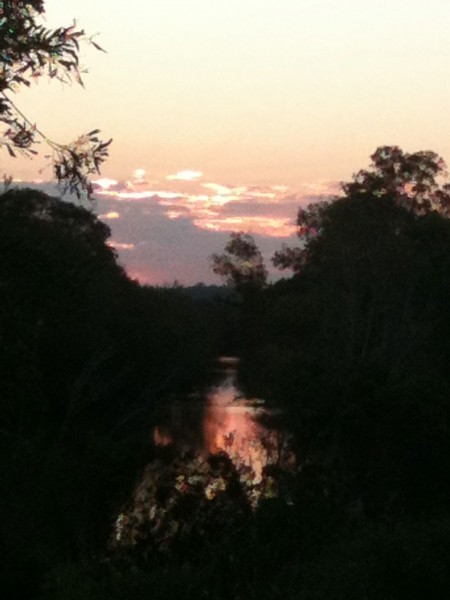 On the way home the traffic on the freeway stops short as roadworks funnel five lanes into one.

And I wonder – how wide can you make a road go?

Really, how wide can a road go?