Will Australia be a spoiler or lifter for #Paris2015 global #climate agreement? asks @Takvera #Auspol

The Geneva negotiating text provides hope for a global climate agreement in the lead up to the United Nations Paris climate negotiations in December 2015.

The Paris climate talks are a significant landmark: whether the international community will negotiate an effective agreement to limit greenhouse gas emissions and reduce global warming, or allow rising business as usual emissions to cause economic and civilisation disruption due to increasing severity of extreme weather events and rising temperatures.

You just need to look around at the climate impacts we are seeing in Australia whether it is in the bushfires in South Australia, heatwaves in Melbourne, or the increase in jellyfish blooms in North Queensland.

The window of opportunity for limiting warming on a global basis to a 2C rise above pre-industrial levels is quickly closing. This is our last and best chance to limit the damage and inter-generational theft that climate change will inflict on present and future generations.

"Paris 2015 is perhaps last chance before we say that the 2-degree target will be almost impossible to reach,” Birol http://t.co/2kJTg7T8GF

I announced late December 2014 my intention of attending and reporting on the United Nations Framework Convention on Climate Change (UNFCCC) conference in Paris in December 2015. I have been following the climate science, and climate negotiations for some 10 years now from behind my computer screen at home.

It is time for me to seriously start the preparations for my itinerary to France. I intend to report live from the climate negotiations, via twitter, facebook and blog reports to nofibs.com.au, Indymedia Australia and my local climate action group, Climate Action Moreland. I am ameliorating the aircraft emissions by two measures: incorporating attendance at the UN climate conference in a longer much overdue holiday, and also planting more trees like at this local event in Fawkner in 2014 organised by the Friends of Merri Creek and Merri Creek Management Committee.

I will be going with my teenage daughter who will also help me blog the event and provide a teen perspective, a voice for the future. I hope to report in particular on Australia’s negotiating position as part of covering this event. See end of article in how you can support John through crowdfunding to cover some of his expenses.

Australia still stands out as a potential spoiler and disrupter to the neogiation of a globally binding international climate treaty. At the Lima negotiations in December 2014 Australia was awarded the ‘Colossal Fossil’ award as the worst performer on climate change action globally for 2014. That is how far we have sunk in terms of climate policy, where even countries like Saudi Arabia and Canada are now seen to be doing more than Australia.

Foreign Minister Julie Bishop failed to deliver any change in Australia’s position at the one day UN Climate summit in New York in September 2014 while 400,000 people marched in the streets of New York and more in Australia.

Her remarks after President Obama’s State of the Union (SOTU) address in January this year were both evasive and untruthful on Australia’s climate action target.

The Abbott Government has continued with the minimal emissions reduction target of 5 per cent reduction on 2000 levels by 2020, but has not funded their Direct Action Climate Policy to achieve this target while our electricity emissions set to soar since carbon pricing was abolished. The Climate Change Authority assessed in March 2014 that a reasonable target given the level of international action at that stage was a 19{17ac88c265afb328fa89088ab635a2a63864fdefdd7caa0964376053e8ea14b3} emissions cut target by 2020.

Since then, there has been a major agreement between USA and China regarding peaking of China’s emissions. While there is no US-India deal on climate change, India and the US did agree on some energy deals including support for India’s plans to roll out 100GW of solar power.

The United Nations Framework Convention on Climate Change have called for new country targets (Intended Nationally Determined Contributions) to be submitted by the end of March 2015 so that the negotiations in Paris can start from a much higher level.

There is pronounced silence from the Australian Government on our negotiating targets.

The UNFCCC meeting in Geneva in February has consolidated the negotiation text for a climate agreement in Paris. The negotiating text is available for download as a PDF from the UNFCCC site.

“I am extremely encouraged by the constructive spirit and the speed at which negotiators have worked during the past week,” said Christiana Figueres, Executive Secretary of the UN Framework on Climate Change (UNFCCC). “We now have a formal negotiating text, which contains the views and concerns of all countries. The Lima Draft has now been transformed into the negotiating text and enjoys the full ownership of all countries,” she said.

Trust building was a paramount achievement of the Geneva talks allowing the parties to capture all viewpoints in the negotiating text and leaving streamlining to future sessions, explained Figueres in the video of the press conference.

The document covers a wide range of concerns and detailed outcomes for the new agreement on mitigation, adaptation, finance, technology and capacity-building.

“The text was constructed in full transparency. This means that although it has become longer, countries are now fully aware of each other’s positions,” Ms. Figueres said. The negotiating text and all targets that have been submitted by March will be circulated to all 194 countries as the basis for further refining a global agreement for signing off in Paris.

“This fulfills the internationally-accepted timetable for reaching a possible treaty because it alerts capitals to the fact that a legal instrument could be adopted in Paris. It does not, however, set this possibility in stone – it merely opens the door for this possibility. As for the legal nature of the agreement, this will only be clarified later in the year,” Ms. Figueres explained.

A blog post by Achala C Abeysinghe at the International Institute for Environment and Development (IIED) articulates the reasons to be hopeful that the 86 page Geneva negotiating text offers the genuine possibility of an inclusive and fair deal for all countries, including the developing countries. She articulates that the negotiating text contains seven key elements including:

As Abeysinghe indicates there are still many issues that are divisive between countries such as the Loss and damage issue, which is considered crucial by developing countries on an equity basis and the Least Developed Countries (LDCs) argue, needs to be considered different to adaptation where it currently sits in the text.

The outcomes from Geneva were greeted with some relief by civil society leaders, who indicated also that substantial work remains to be done at intermediate talks before finalising the agreement in Paris.

“There’s been a seachange in the dynamics here thanks to the open and consultative approach of the Co-Chairs. Countries also came ready and willing to work. The spirit of Geneva needs to be kept alive, as we move to on to deal with crunch issues like the need to scale up financial support for action and how to treat richer and poorer countries fairly, and loss and damage – which has the potential to be a make or break issue for Paris.” said Julie-Anne Richards, from the Climate Justice Programme.

Tasneem Essop, WWF head of delegation to the UNFCCC, stressed that attention should turn to political leaders “as they are the single most important influence that will shape the final outcome of a new global climate deal in Paris”. 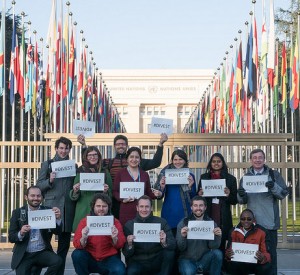 Jamie Henn, Strategy and Communications Director of 350.org said these negotiations need to send a clear signal to investors that most exploitable carbon reserves need to stay in the ground unburnt. “As the talks here in Geneva come to a close, people around the world are taking part in Global Divestment Day, a worldwide effort to move money out of the fossil fuel industry and into a clean energy future.”

Jennifer Morgan, Global Director, Climate Program, World Resources Institute commented that the Geneva outcomes provided a very promising start, but that much hard work remains, that “the palpable positive spirit coming out of Geneva is a much better measure of progress than the current length of the negotiating text.”

The negotiating text will be further refined and issues debated at sessions in Bonn, Germany from 31 August to 4 September and again 19 to 23 October 2014.

In terms of achieving agreement in Paris, compromises will need to be made by all sides keeping in mind equity considerations and capabilities of developing countries. Not an easy balance to achieve between 194 nations. But that is what must be done to ensure climate change is slowed down and limited to avoid the possibility of more catastrophic consequences.

The question remains, what role will Australia play in this process?

Help me report live on the ground at the Paris climate change talks. I am crowdfunding support to help meet Paris accommodation and living expenses for three weeks for myself and my teenage daughter.

We will be covering the conference in December 2015, the negotiating positions of Australia and other countries, and associated events to give you grassroots and informed analysis from Paris. The return on your investment will be some great live reporting via twitter and news articles plus an honourable mention on my blog of your support.