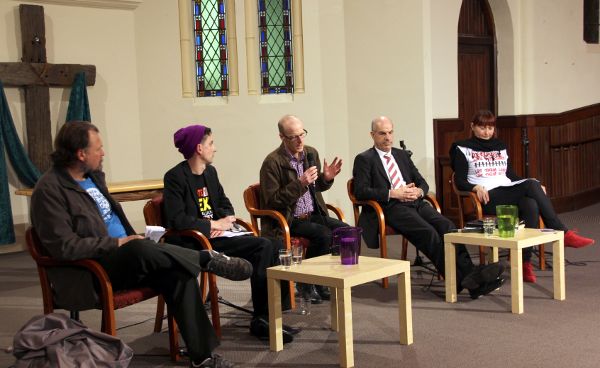 The 3rd and final meet the candidates forum for Wills was hosted by the Brunswick Uniting Church on Friday night. Five candidates attended to present their policies and to take questions from a moderator and from the audience. But it was the very last response to the very last audience question that struck a responsive chord from all present. The question was “What can we look forward to under a Tony Abbott Government for Wills?”

Candidates on the panel included Adrian Trajstman (Sex Party), Tim Read (Greens), Kelvin Thomson MP (ALP), Margarita Windisch (Socialist Alliance). Philip Sutton (Save the Planet party) was a late attendee, who is standing in Batman, but represented Dean O’Callaghan who could not attend the evening.

An observation I made at the start of the forum:

Looks like #LNP Shilpa Hegde anothet no show in #Wills2013 3rd forum. Why would you vote Liberal when she doesn't meet the people?

I wasn’t the only one asking this question. Shilpa Hegde did not attend the Climate and sustainability forum on Monday 19th August, nor the Food and agriculture forum at Coburg Farmers Market on Saturday 23 August. She is employed as an IT consultant which adds further irony to this question from the audience:

Qst: I have a question for (absent) Liberal candidate Shilpa. Does she have Google maps? (Audience cracks up laughing) #wills2013

We won’t know the real reason why Shilpa Hegde won’t talk to voters, but this article gives some indication of the large scale avoidance of public forums by many Liberal candidates.

Now Libs won't even let candidates speak to their voters. This election democracy is dying before our eyes http://t.co/YWfL4Cp5qN

The issues that have kept on coming up again and again in Wills are treatment of asylum seekers and refugees, climate change, equal marriage, economic transition and the NBN, education, with concern over cost of living and unemployment if Tony Abbott Coalition is successfully elected on September 7.

I wasn’t the only citizen journalist attending. Sarah Stokely did an amazing job tweeting the whole event live, encapsulated in some 73 tweets from the evening which were then consolidated using Storify.

Members of the panel were first asked to introduce themselves. Then the moderator asked the panel three questions.

1. What are the main election issues in Wills? and why?

2. What are the main issues you are concerned with?

3. The Uniting Church in Brunswick are compassionate people and have done much work helping asylum seekers and refugees settle in the community. This was a question dear to their own hearts. What are your policies for the treatment of asylum seekers?

The last audience question was “What can we look forward to under a Tony Abbott Government for Wills?”

Kelvin Thomson highlighted the reversal of carbon pricing, review of the Renewable Energy Target and closing the Clean Energy Financing corporation. “If we are serious about tackling climate change these things are very important and yet if there is a change of Government they are at risk. I also think that some of the nation building things like the National Broadband Network, you’ll get the second rate network that doesn’t go to peoples homes.” He also raised the delay of superannuation increases and the impact of the Coalition’s Paid Parental Leave scheme on share franking credits not being passed on to shareholders affecting the income of self-funded retirees.

Greens candidate Tim Read picked one issue and highlighted the massive layoffs of public servants similar to when the Newman Government was elected in Queensland. “We are going to get a lot of refugees from Canberra. Treat them nice. (audience chuckles) There are a lot of people in Wills who work for the government. There is going to be unemployment as a direct result of cuts to government departments across the board.”

Richard Denniss on the impact of Abbott's job cuts on Canberra. A ruination. http://t.co/ubRivvXdUa

Adrian Trajstman saw some glimmer of light with Kevin Rudd talking about marriage equality in the first leaders debate. “it is something so easy to fix” Adrian said. He then listed all the countries that have brought in marriage equality: New Zealand, Argentina, Brazil, Belgium, Canada, Denmark, France, Iceland, The Netherlands, Norway, Portugal, Spain, South Africa, Sweden, Uruguay, parts of Mexico and the USA. He concluded, “Anything but Tony Abbott please…” to audience applause.

The very last response came from Philip Sutton from Save the Planet Party. His answer was perhaps the most thoughtful and was given a loud round of applause at the end. Here it is in full:

I don’t want to add to the list because it is just depressing. What I do want to do is throw a question back to the audience.

I think what has happened is we have allowed the Abbott type Tea Party forces and the Murdoch Press to get complete control over, not just the country, but the right wing. Now most us people here … are left wing. I don’t know whether that is right or not. But I think there is something seriously wrong with our society. Once upon a time there used to be such a thing as small-l Liberals. They were usually quite compassionate. Remember this radical called Malcolm Fraser? He hasn’t really changed much since 1975 when we all hated him. So what I’m saying is, there used to be people around who were on the right who were small-l Liberals – Petrou Georgiou is a more recent version, Ian McPhee, Dick Hamer as the Premier of Victoria.

I think what has happened is we have allowed our society to have the nice right wingers not represented by anybody and it is the Tea Party type people who have captured these people and are using, wielding their vote. That means we are constantly on this 50 per cent margin where we can’t get anything decent through.

If the small-l Liberals were mobilised you would probably have a 75 per cent majority for most of the decent things you want in the country. I think it is our fault. Not that we are right wingers.

What I am saying is we are going to have to get out there in the community, going to have to connect up with all the small-l liberals that are still alive – we can exhume a few that are dead. (Chuckles from audience)

Save Planet: We've allowed tea Party type extremists to capture the right. It's our fault. We must find small-L libs & rebuild. #wills2013

We have got to rebuild that potential for society to be able to work on compassionate issues across the political divide. I think that this is a really major issue. Once upon a time all the small groups used to be inside the big parties, more or less. And then the Democrats pulled the small-l Liberals out of the Liberals which made it easy for the really hard right to take over the Liberal Party. Then the Greens, and I was part of this move, pulled out of the Labor party and that made it easier for the right to get hold of the Labor Party.

Until the compassionate forces are able to build up their numbers we have this really bizarre position where the actual positions of Australians is not represented by a lot of the people in Parliament.

Now, history is history. We can’t unscramble that egg, but what we have to do is work out how people of compassion and care, whether they are right wing or left wing can start working together across political divides and we can recapture this country for people who are actually basically decent.

Philip Sutton seemed to be making a lot of sense. We have lost control of our major parties to far right ideologues, and they no longer adequately represent the mainstream whether it be on acting on climate change, equal marriage or a long list of issues of compassion and fairness widely of concern in the community. It is time to take back our democracy.