Would it kill you to listen? On the campaign trail with @malleeray #malleevotes: @davelennonabc reports 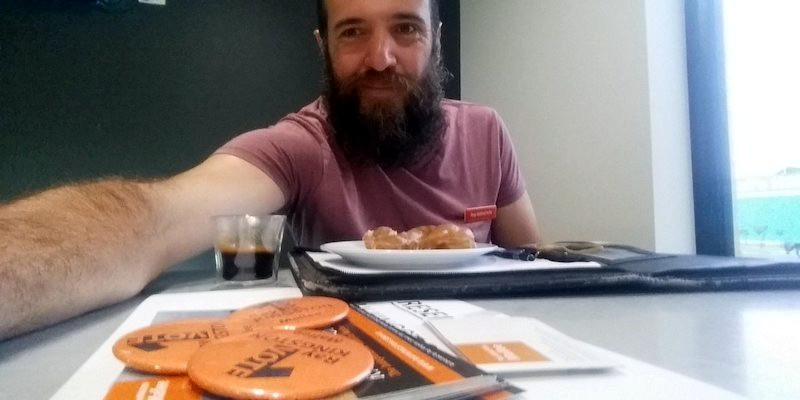 After a week in the shearing shed Ray Kingston (@MalleeRay) the Independent for Mallee kicked off Saturday in a cafe at Kerang just talking to people who wanted to have a chat about their concerns.

Next came the Kerang Markets, which spread along the walkway in a lush park just across the road from the Sir John Gorton Library, a reminder of another local mayor who continued on to federal politics.

Kerang is a town on the Loddon River in open-channel irrigation country in Northern Victoria.

Things aren’t great for this farming community. It was really noticeable driving in, since it’s looking patchy at best. Once again it all comes down to water, and for dairy farmers the price of milk. All the major supermarkets might have ditched dollar-a-litre milk but the full extent of the damage it did to the industry is not yet clear.

Rural towns like Kerang are service centres for their farmers so these are still uncertain times. This article from The Gannawarra Times shortly before the end of the milk price issue covers the issues well.

After a good morning in Kerang, including buying what I swear is the world’s heaviest watermelon (see image, above) it was a quick half-hour drive down to the Pyramid Hill Fiesta!

It’s been a lot of years since I was last in the town and frankly then there was almost a gallows humour around it’s prospects.

Saturday was Fiesta Day, a celebration of the Filipino population in the town and testament to how you do decentralisation and immigration properly.

Pyramid Hill is not the only town in Mallee that has ‘cracked the code’ on this. It ain’t hard: identify a need and meet it.

There’s almost always a need for workers, in this case for a local piggery. Find a group of willing immigrants, put in the support services they will need and then welcome them into your community with open arms.

I really wish I could have taken a tour group around the Fiesta, a mixed group of people, some of whom think all rural folk are dyed-in-the-wool racists, mingled with doomsayers who contend immigrants don’t try to fit in and a few members of ‘city superior’ crowd who are convinced that no ideas of value comes from the regions.

A remarkably similar scenario is playing out in Nhill (also part of the Mallee electorate) with the Karen Community. It is not a case (as you often see it described in headlines) of them being “forced” into regional Victoria. They are offered the chance to come and have a look and to meet those already here, and if they like what they see they come and stay and set up Facebook pages.

So why in the name of all thats sane is this government still burbling on about bunging 23,000 immigrants into jobs in and around regional Australia? Especially when regional Australia is apparently fit for these purposes.

This is an example of tick-the-box government. We need fewer people in cities so we’ll chuck a few migrants out of Sydney, Melbourne, Brisbane, the Gold Coast or Perth. That should fix it… problem solved. Next!

It’s crap. Pyramid Hill, Nhill and Armidale are examples of decentralisation in terms of migrants done right, but it’s only part of what’s needed from a decentralisation policy that will see both the revival and empowerment of regional, rural and remote Australia.

The rumour mill is forecasting a big regional infrastructure spend in the forthcoming federal budget, and the regions will take the money if it’s offered; but it should not be confused with a genuine solution to regional, rural and remote Australia’s woes. Nor should it be confused with a credible federal decentralisation policy. We will see. If the government thinks ‘splashing the cash’ will be a vote-winner, it may be disappointed.

Ray Kingston is right on the money with this. In a recent story in the Sunraysia Daily about government plans to suddenly put 20 Murray Darling Basin Authority (MDBA) jobs in Mildura, Griffith and Murray Bridge, Ray said: “While I welcome this (MDBA) move in principle, I have deep reservations about what looks like another ad hoc process knocked up on the back of an envelope, an attempt to shore up country seats in the lead up to the election.”

Ray has consistently said decentralisation needs to be bi-partisan, it’s the only way to achieve the continuation of policy needed to actually achieve a sustainable outcome.

The punchline here is there are communities, councils, and development associations in regional, rural and remote Australia that know how to deliver genuine workable decentralisation outcomes for regional businesses, regional economies and ultimately Australia.

So the question needs to be asked of politicians and policy makers in Canberra: Would it kill you to listen to those with a proven track record?