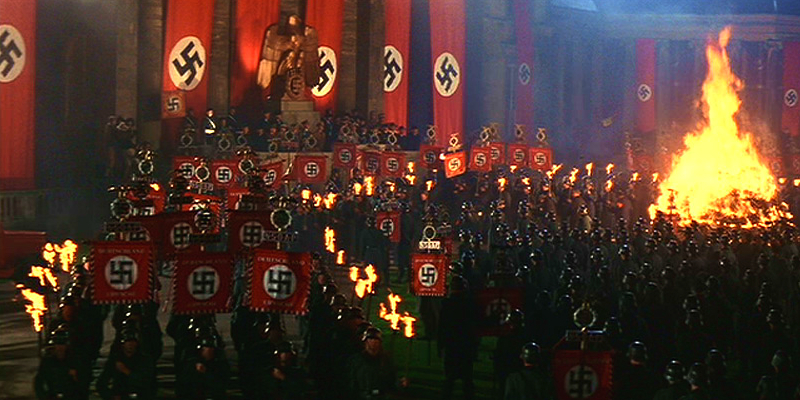 Book burning scene from Indiana Jones and the Last Crusade.

Over the weekend a ripple of panic went through the social media in Australia. I was alerted to it by one of my Twitter friends.

Word was that Vanessa Powell, described on her Twitter profile as a “refugee supporter”, had been sent two anonymous tweets by the Department of Immigration and Border Protection. They could have been generated by anyone, from lowly staffer to the top man, Immigration Minister Scott Morrison.

I don’t know what Powell’s Facebook post was about, and I don’t want to know. That is not the point.

As I checked the story to see if the accounts were real and the issue was not some Twitter spook-fest, I noticed a smattering of tweets in my feed from big tweeters – those amongst us who have large followings and make no secret of their stance on the incumbent government.

“Cleaning my Twitter feed” was a common thread, as was the cry “fascists!”.

“First they came for the mummy bloggers, now they’re coming for us,” was another, referring to the announcement last week of a crackdown on public servants’ use of social media to express personally-held beliefs about politics, which had gone as far as suggesting people dob in friends who are critical of the government.

A Storify was quickly posted, using very emotional language, but the message was clear – very soon after the Abbott Government oversaw legislation broadening freedom of speech and the right to be a bigot, these government tweets were asking for less freedom of speech and bigotry from Vanessa Powell, if indeed her Facebook post was bigoted.

I thought back to my own tweets, and considered, for a moment, whether I should be worried.

Anyone who follows me on Twitter would know I am critical of the Abbott Government. I participated in and reported on March in March, which was a nationwide vote of no confidence in Mr Abbott and his policy directions.

I voraciously tweeted my anger about Julia Gillard’s indefensible stance against marriage equality.

I tweeted my thanks to the Liberal Party’s Senator Sue Boyce for crossing the Senate floor last year in support of it.

I tweeted my support for the Liberal Party’s member for Murray, Dr Sharman Stone, when she stood against her own cabinet with her constituents during the SPC-Ardmona negotiations.

No-one who read all of my No Fibs interviews for the 2013 federal election would have grounds to accuse me of bias. I interviewed every candidate who agreed to be interviewed. That my local sitting Liberal MP Andrew Laming refused cannot be construed as bias. I reported factually when he reneged on a deal to speak with me, I reported his public appearances during the campaign, and was pleased to find it was not difficult to find something positive to write about his policy approaches.

At the Bowman candidates’ forum, he announced his support for civil unions for same-sex couples. This is a step which has seen the eventual legislation of gay marriage in other countries, such as New Zealand and the United Kingdom, one which I believe we will need to take here. My local member supports it. Tick.

I don’t need to delete my tweets, because I am politically fair.

Mr Abbott and his ministers cop a heavier load of my ire, sure, but as far as I am concerned, it’s the government which gets the big magnifying glass over its head. Mr Abbott said much to this effect while he was in opposition.

I can see why social media users step up and fill the gaps they observe in the ALP’s commentary on the Abbott Government, particularly where Lib-Lab have policy overlaps. I have seen more brilliant one liners on Twitter than I have from the opposition benches at question time.

I can see why social media users become a de-facto media, especially in the wake of such events as March in March.

The aftermath of March in March has been fascinating from a media perspective. First-time and seasoned protestors came out of the woodwork, and when there was a glimpse of the mainstream media (roving news camera operators, mainly), it felt like an affirmation.

When my partner asked why it was significant to see commercial networks at the Brisbane march, I replied that all our social media friends who might be perplexed, offended, or concerned about our involvement would see the images on the evening news and the messages of the event might sink in a little more.

I have spent the past few weeks saying to anyone who will listen that the mainstream media is no longer resourced to cover such events, particularly on weekends. Fairfax journalist John Birmingham of The Brisbane Times captured the fallout perfectly.

The effect of this media failure cuts both ways. Australians who expected to see themselves marching on the evening news started coming to terms with the death of the mainstream media. Australians who expected the march would go unnoticed because they have some control over media output started coming to terms with the fact that the social media is the only widely-distributed media left, and it’s well beyond their control.

Which is why I think the government wants to send fear messages through the social media, and is demanding absolute loyalty from public servants, even in their private social media.

If criticism of the government on the social media comes with legal threats, the next step is to put the same pressure on anyone who reads that criticism.

They used to burn books they didn’t like so that people couldn’t read them.