Young women and @HillaryClinton, what’s it all about? @Gay_Alcorn comments 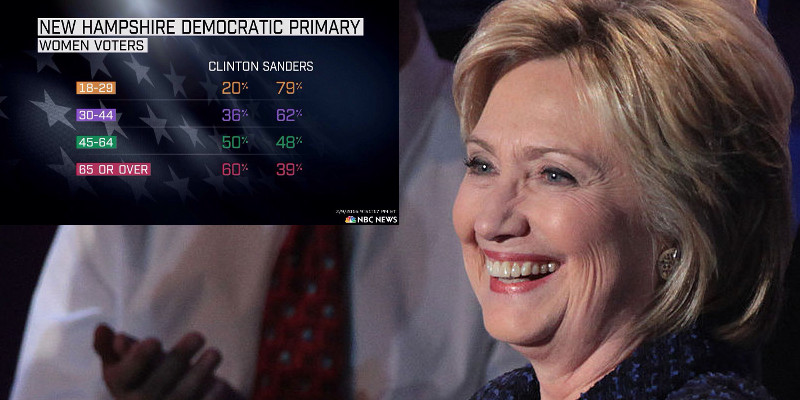 Gay is the Melbourne editor for Guardian Australia. Politics, books, culture and whatever you want to talk about. She was United States correspondent for Fairfax during the election of George Bush as President.

Gloria Steinem and Madeleine Albright’s interventions just before New Hampshire were not just wrong-headed, they were politically disastrous.

Oh young Americans, and young women in particular, what have you done? More than 80 per cent of voters under 30 in the New Hampshire Democratic primary voted for an old man who wants a revolution.

And women, presented with the first serious female presidential candidate in the history of the United States, rejected her. More women voted for Bernie Sanders than Hillary Clinton. Women under 45 overwhelmingly voted for Sanders, with 79pc of women aged 29 and under preferring the Vermont Senator. According to CNN’s exit poll, only those over 65 chose Clinton.

This is astonishing, but maybe it’s not. Of course no woman or man should vote for Clinton because she’s female. Women aren’t a monolithic group, any more than men are. To have any expectation that someone owes you their vote because of your gender, your race, your age or your religion is insulting, a sign of arrogance.

And so the angry outsider boys won New Hampshire. Sanders, with his fury against Wall Street and growing inequality in America, said it was a wake-up call to the political, economic and media “establishment”. Donald Trump, with his wild insults and fixation with populist economics and immigration, is upending American politics just as convincingly from the Right.

But what of Hillary Clinton? It was always Clinton’s problem that she was the presumptive Democratic presidential nominee. There are too many people tired of the idea of presumptive anything, as though wise heads in Washington would again anoint their chosen one, and that the primaries were just something to get out of the way.

It was always going to be impossible for a former first lady, senator for New York and secretary of state to offer herself up as something new. She is self-evidently a creature of the way things are at a time when so many people are really, really sick of the way things are (and not just in the United States, but across much of Europe, and in Australia).

Gloria Steinem and Madeleine Albright’s interventions just before New Hampshire were not just wrong-headed, they were politically disastrous. What would be the best way to turn young women off voting for Clinton? How about suggesting, as Steinem did, that young women were looking for dates in the Bernie camp and would come to their senses when they got older? Or how about ticking them off, as Albright did, instructing them to support Clinton because there was a “special place in hell” for women who don’t help other women. Let’s patronise them as too young and foolish to appreciate the battles older feminists have fought on their behalf.

The reaction was quick and angry. Read the words of young women, like this one headlined When you Ask me to Vote For Hillary: “To vote for her in the primaries, I would need to believe that the establishment on both the right and the left have so thoroughly strangled the political system that it is no longer “reasonable” to even try for reform.”

I am a generation younger than Steinem (the feminist warrior is now 81) and Albright (the first female secretary of the state is 78). But I am old enough to understand the emotion they feel, even if what they said was foolish. I know that it would mean something, and not just for Americans, for a woman to be elected president. I will never forget the tears that ran down Jesse Jackson’s face on the night Barack Obama won the 2008 election. Obama’s policies were most important, but his race made his victory historic.

Her rejection by so many women, in contrast to her 2008 presidential bid, must hurt.

New Hampshire should be kept in perspective. Sanders was expected to win in this small, comfortable, mostly white state, and there is a long way to go before the Democrats decide their nominee. Yet Clinton was trounced and her rejection by so many women, in contrast to her 2008 presidential bid, must hurt.

As Albright said, women like Clinton have worked for most of their lives to make things better for women. Clinton grew up in an era when women had little agency over their own reproduction and when female Senators were a rarity. She has weathered all those corrosive things, like commentary on her looks, her hair, her clothes, whether or not she should have stood by her man, whether she’s menopausal, whether she’s a lesbian, a tough bitch, all those double standards. She has persisted.

She has never been a woman – like Margaret Thatcher in the UK – who was happy being the only woman in the room. Planned Parenthood has acknowledged Sanders’ record on supporting abortion rights, but it has endorsed Clinton. “We have a lot of friends in Congress,” its president Cecile Richards has said, “but we have one true champion”.

Her record as secretary of state has been trawled over, but few would dispute that she promoted women’s rights as human rights like no one before her.

Yet the lack of enthusiasm among progressive young women is not really surprising. Clinton has embodied the women of her generation who sometimes naively believed that by being smart and working harder than anyone else, you could make a difference.

And she chose to do that from the inside. As any women knows who has a tried to achieve change from within – rather than as a purist hurling criticism from the sidelines – it does mean compromise, it does mean gathering a coalition of interests, it does mean focusing on pragmatism and on the achievable. You do collect baggage. Clinton has been around so long she has more baggage than most, and now faces the inevitable question as to whether despite all that work, she has become part of the problem.

Gender is complicated. Like Julia Gillard when she first became prime minister, Clinton in her last presidential bid barely mentioned it. That is a generational thing, too – women need to put their head down, be at least as good as the men, and never risk a backlash by drawing too much attention to your gender. That approach has gone now, with Clinton speaking of being a woman candidate as a rebuke to Sanders’ claim that she represents the status quo. How could she be, when she is pitching to be the first female president of the United States?

Yet the work of older feminists like Clinton has been successful in one respect: polls suggest young American women assume the equality of the sexes now, and take for granted that there will be a female president in their lifetime. They are just not convinced it should be Clinton.

Sanders has all the freedom of a critic, and he articulates so well the bigger picture.

Sanders picks up on the restlessness of the young, on their anger and disillusionment in an American political system that seem too remote from people’s lives. It has been pointed out that his actual achievements are slim for someone who has spent 25 years in Congress. He’s been primary sponsor of just three bills, and two of those were to rename post offices in his home state.

Sanders has all the freedom of a critic, and he articulates so well the bigger picture. In the debate before the New Hampshire primary, Sanders railed again about the “corrupt” campaign finance system, and about Clinton’s appalling decision to accept $US675,000 in speakers fees from investment bank Goldman Sachs. Clinton swiped back at Sanders’ “artful smear….You will not find that I ever changed a view or a vote because of any donation that I ever received”.

It is the same argument politicians use in Australia to reject or delay demands for our own political donation system to be tighter and more transparent. Sanders’ response was devastating: “Let’s talk about climate change,” he said. “Do you think there’s a reason why not one Republican has the guts to recognise that climate change is real, and that we need to transform our energy system? Do you think it has anything to do with the Koch brothers and ExxonMobil pouring huge amounts of money into the political system? You know, there is a reason why these people are putting huge amounts of money into our political system. And in my view, it is undermining American democracy.”

This is hard to argue with and Clinton just stood there, pursing her lips. If she does win the nomination, she will owe Sanders a big favour. He has pushed her on central issues of rising inequality and the distorting role of corporate money in in political life. She talks of raising the minimum wage, she has a proposal for curbing Wall Street. She has policies on affordable college fees, childcare, and parental leave, policies important for many women.

The candidates agree about most of the problems. It’s just that Sanders can raise the spirits, capture the mood of the age, and that is not in Clinton’s nature. She insists she’s a realist who can achieve things. Her central argument against Sanders isn’t in the least sexy and it isn’t likely to inspire leftish young women (or men for that matter). Yet there’s truth in it.

“A progressive is someone who makes progress,” she says. Someone who sets priorities, who works with boring committees to make useful change. Sanders looks to Scandinavian countries and calls for free college education and comprehensive 100pc health care. It is up to Clinton is to say that the US is not Scandinavia, that his dreams won’t happen in America right now.

“I know that it’s maybe not the most appealing or charismatic message to say, ‘Hey, guys, be angry, and then let’s roll up our sleeves and get to work,’ ” Clinton said on the weekend, “Anger is a powerful emotion,” she added, “but it’s not a plan.”

I may sound like the middle-aged woman I am, but she’s got a point. Clinton has a mixed record, but she’s got a record. She’s experienced. She will never be the romantic outsider. She’s been scrutinised and vetted more than any candidate in history. She is a person of substance, of deep policy and political knowledge, and a person with a relentless work ethic. She’s a fighter, as tough as nails. And she has another thing going for her in my book: she’s a woman.