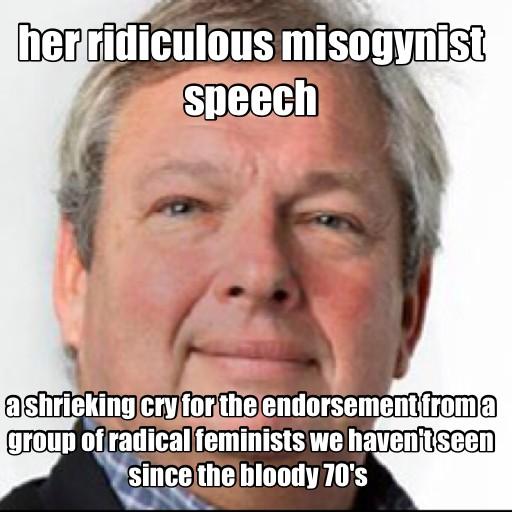 I only know three things about Piers Akerman. He’s a right wing hack for one of Murdoch’s mouthpieces. Yesterday he went on Insiders and surprised no one by repeating rumors questioning the sexuality of Prime Minister Gillard’s partner, covering it clumsily with a dog whistle along the lines of ‘Who cares in this day and age if people are gay… but a lot of people have been saying he is’. The third thing I know is that Piers moderates his own blog and happily lets comments like the following past the keeper, “Deveny is one of Australia’s greatest pieces of human garbage, a contemptible low life of unspeakable depravity.”

Wow. Nanna! Who knew you were a Piers Akerman fan!

Many are furious about Pier’s comments and some are even petitioning the Managing Director of the ABC, Mark Scott to prevent Piers Akerman from appearing on the ABC as a paid commentator.

Today the ABC’s Mark Colvin, who I have enormous respect and affection for, suggested in some twitter banter with journalist Margo Kingston that Akerman and I are two sides of the same coin. Colvin’s take was that if Piers were barred for his comments, following Kingston’s conclusion that the ABC’s silence on his Insiders appearance was an indicator of the broadcaster having no standards, ‘your approach would likely also bar someone like Catherine Deveny from appearing on QandA’.

@margokingston1 Not at all. But your approach would likely also bar someone like Catherine Deveney from appearing on #qanda. And there's a

.@Colvinius, I don't know @CatherineDeveny work – does she make up facts on ABC to falsely accuse, broadcast rumours, work unethical?

At this point I jumped in and said ‘No’. But let’s face it, tell me what they’re paying and I’ll consider it.

I’m frequently introduced as a ‘journalist’. I immediately and vigorously correct people. I’m not a journalist. I’m a comedian and a writer. Being published in a newspaper no more makes me a journalist that being in the MCG makes me a footballer.

I’m not a job snob at all – some of my best friends are black gay journalists – but calling me a journalist is inaccurate. Not a value judgement. It’s like calling a bus driver a butcher. I explain to people that ‘journalists are taught to be impartial, they’re professional fact checkers, disseminators of truth, trained observers. They are out to find ‘What is true?’ and they attempt to find the answer in an unbiased fashion.

‘They are drilled to leave their opinions, prejudices and biases out of their job. They are to recognise them but they are not to let them interfere with how they do their reporting.’
That’s the idea.

I am a writer and a comedian. I say what I like, what a feel what I reckon and what I want. I have no universal standards of ethics and principals to adhere to. Just my own personal ones. Unlike journalists.

George Carlin says, ‘I think it’s the duty of the comedian to find out where the line is drawn and cross it deliberately’.

But here’s the murky bit. Akerman is a journalist but he is also columnist. WTF is a columnist? I was one for three years for The Age and I have no idea. Who determines what is appropriate or inappropriate for him to say?

Of course the ABC has guidelines and standards for its own journalists. But when Akerman appears on Insiders is he a paid contributor or a guest? Is he a columnist or a journalist? And if he is a guest is he alone responsible for his content and the response to it? Or is he an analyst? And if so WTF is that and what are the expectations and limitations of an analyst?

Akerman’s shameful dog whistle would clearly fail the test of being an objective professional as far as journalistic standards are concerned. And calling him a columnist or an analyst makes it too murky to judge so let’s simplify is and just use this word.

And let’s just ask this question.

‘What was Piers attempting to achieve when he bought up those rumours?’

Intent and context is the only way comments deemed to be offensive and inappropriate can be judged. Personally, I think he’s a pig.

On a personal level how do I feel being described, as I routinely am, as the left wing female alternative to right wing, race baiting, homophobic, fear mongering, misogynist tabloid hacks? (Who coincidently are all highly paid middle aged rich white men on staff and I’m am a single mum freelancer).

Couldn’t care less. It indicates people know nothing about my body of work, ethics and personal standards and even less about the people I am being compared to.

Does not commenting on Pier’s highly unethical comments indicate the ABC tacitly supports Akerman’s veiling mud slinging as ‘public interest’? Is it a case of silence equals consent?

Or is it simpler? If you support diversity of opinions and freedom of speech you have to suck it up even when you don’t like what is being said?

Or is it ABC’s constant fear of being accused of ‘right wing bias’ that makes Aunty more timid about commenting on Akerman’s Insider’s performance? It’s hilarious how all the people constantly accusing the ABC of right wing bias never, ever bring up gender imbalance and lack of QLBTIQ, disabled or indigenous representation on our national broadcaster.

As we were all reminded last week after watching The Chief of the Army, Lieutenant-General David Morrison, extraordinary video addressing the latest.