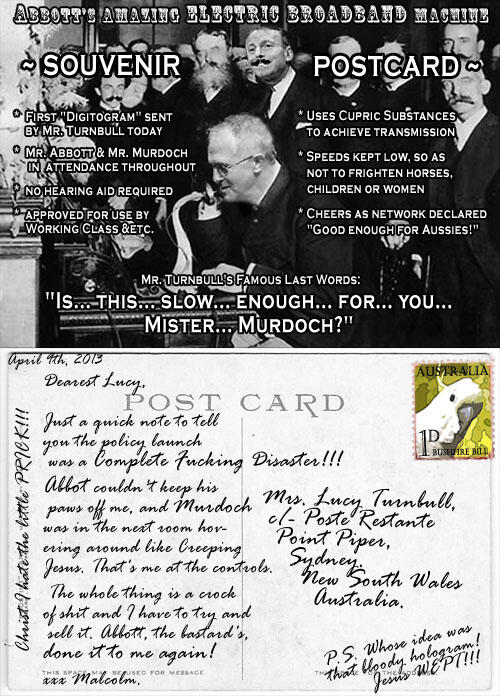 Since the release of the Coalition’s broadband policy on Tuesday it has become clear that the policy is designed to fail. Even if taken at face value it is clear that the plan will not be able to meet its targets. So why devise a policy destined to fail?

One simple answer is to keep the ‘free market’ free – free from regulation, free from anti-monopoly legislation and free from responsibility.

The policy itself is made redundant by the three separate reviews the Coalition is planning for the NBN – a strategic review, an ‘independent’ audit and a cost/benefit analysis. Having these codified into the policy ensures that no matter the promises made, the Coalition can build a case to limit or even cancel the rollout, or cancel it in line with its 2010 election policy, using its long-running austerity narrative.

Who will do the reviews?  I’d guess Peter Costello. After his Queensland Commission of Audit, we can assume that the Coalition intends to use the same tactics to remove any case for change to Australia’s telecommunication network.

This will set Australia back decades under the guise of ‘economic management’. With broadband speeds barely reaching 13Mbps on average in Australia, & Akamai’s data transfer caps reaching a measly 4Mbps, the Coalition cancelling the NBN would have dire consequences for Australia’s digital economy.

Recent developments in the IPTV (Internet Protocol Television)/OTT (Over The Top) market in the US and Europe mean Foxtel can see that its days are numbered as a virtual monopoly. The only way to prevent ‘cord-cutting’, a term used to describe disconnecting pay TV services, is to stymie broadband development.

The NBN’s plan to decommission Telstra’s HFC network that Foxtel runs on ensures that competition is fostered amongst smaller players in the content delivery market. Murdoch’s press has been very vocal against the ‘wasteful’ NBN since 2010, leading me to believe there’s more to the Coalition’s plan to deliver substandard services to Australian consumers than meets the eye.

The main take-away from Murdoch’s speech at the IPA last week was less regulation, less fostering of development and more ‘freedom’ for corporations. The idea that developing national infrastructure is ‘placating a nation’ is laughable, as there has been little to no development of broadband markets by private organisations over the past decade (transcript of Murdoch’s speech below).

It’s clear that News Ltd’s market reach would be drastically reduced if smaller content providers were able to gain a foothold in this lucrative market. Users would no longer be subject to the whims of a monopoly and Foxtel’s ability to use lock-in contracts would be diminished.

Foxtel has already realised that the OTT/IPTV market is the future, but is struggling to capitalise on it. There are plans to develop the market more, but Foxtel is hobbling services by removing channels and charging more for IPTV services. This is in no small part due to the inability of Foxtel to force users to sign up to 24 month contracts when they are using their own equipment.

This is of major concern to Foxtel, as the contracts ensure they can continue to overcharge their 1.4 million users. Australia pays some of the highest pay TV prices compared to wages in the world, making Foxtel a profitable enterprise. The ARPU is sitting at $99 for FY 2012, giving weight to the idea that this is a huge cash cow for Murdoch’s media empire.

If OTT/IPTV services are offered that directly compete with the entertainment channels of Foxtel, this number would drop dramatically. Essentially Foxtel would be left with their sport deals as the only selling feature of their service.

The ARPU would drop dramatically if people only signed up for basic services and sport, which is currently the major drawcard for Foxtel. Why sign up for entertainment packages when, for a fraction of the cost, users can sign up for a fully featured OTT service that offers the same content on-demand for one flat rate price.

The reality is that Murdoch sees government intervention as a threat to his hostile business practices; from regulation to infrastructure development, all must be stopped so Rupert can ‘live freer’.

Over the next few months leading up to the election we can assume that attacks on the NBN will grow shrill and desperate from News Ltd papers, giving people the impression that if they don’t settle for less their ‘freedom’ will be impinged upon. The truth is that the opposite is true.

With greater speeds, greater stability and the freedom to choose from whom we purchase content, a government-funded first-in-class network will foster Australian content and give content providers the opportunity to gain a greater market share.

The funny thing is that if Foxtel and Murdoch had embraced technological development years ago there would be no threat to their market share, and, if anything, there would be less need for a government funded network.

The truth is that private enterprise has failed Australia when it comes to communications and content delivery, preferring to hold onto legacy business practices while investing little in the networks they rely upon to deliver services. The status quo that has arisen from such lack of interest in developing technology allows for unreasonable profit margins on users while deterring development of networks from smaller players.

If there is a change of government later this year, expect to see a lot of huffing and puffing about costs, even in such a strong economy, in aid of powerful media organisations maintaining their monopoly on content.

As demonstrated by Abbott’s lavish praise of Murdoch and and his neo-liberal ideology in his speech to the IPA last week, the links between Rupert Murdoch and Tony Abbott are strong. You have to wonder who is really in control of the Coalition’s policies these days. 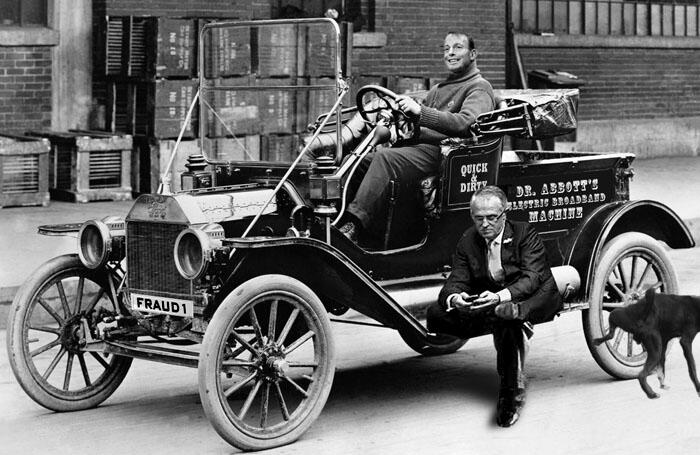 We are not here to mark an anniversary that just commemorates the past. We are here to champion a vision that speaks to the future.

But, instead of hearing about new initiatives that would make Australia more competitive and open up new opportunities for the Australian people, we hear more of the class warfare rhetoric that has proved so toxic and so damaging for older nations. And, here is something else we are not hearing about: we must argue the morality of free markets and the immorality of markets that are not free.

The cold, commercial word ‘market’ disguises its human character – a market is a collection of our aspirations, exertions, choices and desires. Typically, those of us who believe in free markets make our arguments by extolling the market’s economic superiority.

But I believe we need to do something very different from what we are used to.

We need to defend the market on precisely the grounds that its critics attack it: on justice and fairness. Yes, the morality of free markets.

Naturally they conclude from this that the way to make capitalism more just and more humane is to temper it by injecting a large dollop of government-mandated sharing.

How often have you elected political leaders to fight against some horrible regulation or tax, only to watch as they basically agree to a watered down version of what their opponents are arguing?

How often – to give another example – do you hear the same people who are calling for free trade go on in the next breath to argue for stronger anti-dumping laws, a back door form of protectionism?

The market succeeds because it gives people incentives to put their own wants and needs aside to address the wants and needs of others. To succeed, you have to produce something that other people are willing to pay for.

At its core, a fair and just society is one where opportunity is open to all – not just those at the top.

Let’s take one example: economic growth. We all know growth is absolutely vital to a free society.

No one should want Australia to be a stag-nation: A nation with a stagnant economy and stagnant aspirations.

But these days when we argue “more economic growth” or “lower taxes” many people think to themselves: “That’s fine for hedge fund managers and CEOs. But it doesn’t mean anything for an ordinary bloke like me.”

Our challenge is to bring that message to such people – whether they are on the shop floor or behind a desk – in a way that lets them understand why they stand to benefit more from a society that rewards their work and initiative than one that pretends to spread the wealth around.

We undermine our case for free markets by conveying the impression that the benefits are only for the already rich, well-connected and politically powerful – that is why we must have a press free from government intervention and why government attempts to regulate the press in Australia and Britain have been ill-conceived. The press must be held accountable, but so must our politicians. Grievances and grudges should not fuel a fundamental shift in our social balance.

In my life, I have learned that most people want the same thing. They are not driven by class resentment.

What they want most is to make a better life for themselves and their families – and to know that the opportunities for their children will be better than they were for themselves.