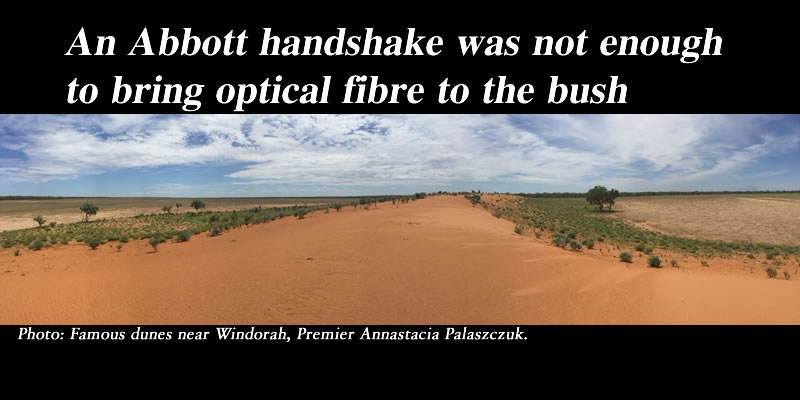 Out in Western Queensland a handshake is a done deal. 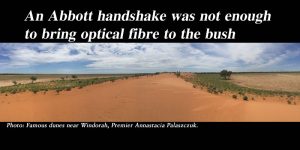 In May 2015, the then Prime Minister Tony Abbott toured the shires of Barcoo and Diamantina in Western Queensland and inadvertently committed the Federal Government to a $16 million fibre optic project. It was sealed through a handshake with Diamantina Mayor Geoff Morton and Barcoo Mayor Julie Groves. Also present were local Federal Liberal National Party member for Maranoa Bruce Scott and LNP Deputy Prime Minister Warren Truss. 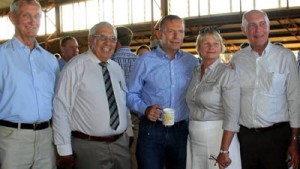 Queensland Country Life reporter, Sally Cripps wrote, “Despite the severity of the drought, Diamantina and Barcoo mayors Geoff Morton and Julie Groves were able to take home news of the promise of optic fibre for their communities after meeting with Prime Minister Tony Abbott and deputy PM Warren Truss in Longreach on Saturday.”

Now, in that part of Queensland a handshake is considered as good as a signature on a contract. Both mayors had been campaigning for an upgrade to the region’s ailing telecommunications network for ten years.

According to Queensland Country Life reporter Sally Cripps, after locals had detailed their problems, “Mr Abbott suggested altering the funding basis from the federal government paying for half of the project to an arrangement where it would pay for a third of the cost.”

“Under the handshake deal the two shires will be required to increase their financial contribution from $1.5m to $2m each,” the paper reported.

To put this in perspective, without any representative of the newly elected Queensland Palaszczuk Government present, Abbott had just re-negotiated a three-way funding split between local, state and federal governments. It meant the Federal commitment would fall from $8.5 million to $7 million.  At the time, the Newman Government had allocated $5.25 million through its ‘Royalties for the Regions’ program but ultimately this amount would not be enough.

Mayor Morton jumped at Abbott’s proposal telling the paper, “We’ve been bashing their door down for years – we weren’t about to let this go by. We shook on the deal and we’ll make it work, even if we have to run a few chook raffles.”

Eye-witness Bruce Scott chirped in with, “I’ve been like a cracked record on this” and, “It’s just the sort of thing we should invest in to create economic activity. This is a legacy project.”

Mr Truss was not reported to have said anything.

Fast forward to July 2015 and Queensland Country Life was running the headline, “Abbott breaks fibre funding promise”.  It seemed that a handshake in the Bush meant nothing in Canberra. The two mayors were shocked to learn they needed to complete an application form through the federal government’s Stronger Regions program. It meant that instead of what they thought was Abbott’s guaranteed funding, the request would now be considered alongside requests of multiple other regions. They’d previously applied to this fund and been knocked back.

“We were of the understanding that $7 million had been quarantined for this project but instead we have to go into a $200 million competitive pool,” Mayor Morton was quoted as saying. “Mr Truss told us it looked dead in the water so we decided to see the boss (Tony Abbott) instead. That’s when we got the commitment of the federal government putting up a third of the money, on the condition of the state and local governments coming to the party.”

Mayor Julie Groves also told the paper that, “the Prime Minister understood what was being asked for. “

“When he suggested going thirds, we agreed to raise our level of funding there and then, and we shook on it,” she was quoted as saying. “After the excitement of meeting with the Prime Minister, this is very disappointing.”

A great pity not to have mentioned it at the time of the Abbott handshake, Mr Scott said, “This is how we deliver. The auditor-general has to give it the tick and value for money has to be identified.”

Now, Abbott could have been forgiven for his misunderstanding of such a sovereign Barcoo ritual as a handshake being as good as a contract were it not for one small declaration he’d made in 2013. In the lead up to the federal election, he’d told Queenslanders that, “I’m very proud and very pleased to be far more of a Queenslander than (Prime Minister) Kevin Rudd will ever be.”

In the lead up to the 2013 federal election, Tony Abbott declared that he was “far more of a Queenslander than Kevin Rudd will ever be.”

Being such a renown Queenslander as he was, Abbott would surely have understood the significance of a handshake in the Bush.

By December 2015, Mayors Groves and Morton were smiling again as the project was approved.

“This will bring us from the 19th Century to the 21st Century without any figure of a doubt,” Mr Morton was quoted as saying.

Mayor Groves added, “Currently, just to send an email in the office it can be a couple of hours, or half a day to go from one email address to the other. So to have something that is going to be instant, I don’t think we appreciate what a difference it is going to make.”

Bruce Scott was chuffed saying, “It will bring metro-equivalent internet speeds, 4G mobile phone access and an unlimited capacity of communications to the National Communications Network.”

However, the federal commitment had now fallen to $5.95 million; down from $7 million under the handshake deal which was down from the initial $8.5 million. At this point Queensland Premier Annastacia Palaszczuk could have thrown her hands in the air and refused to have anything to do with the whole schmozzle. She could have played politics and abandoned these blue ribbon electorates to their woeful internet speeds.

Plunging deep into LNP territory on Friday, Palaszczuk flew to Windorah to confirm her government’s commitment to the project by providing $6.25 million in funding (up from initial $5.25 million).

“It is no exaggeration to say that the Barcoo-Diamantina Fibre Optic Project will revolutionise communication services in these remote communities,” she said.

All along she’d been quietly chasing up the federal commitment with letters to both Prime Minister Tony Abbott and later to new Prime Minister Malcolm Turnbull.

“I wrote to the former Prime Minister last year when he reneged on his commitment, and I wrote again to new Prime Minister Turnbull to urge that he reconsider,” she said.

The project is expected to begin in May 2016, almost a year after the shires had believed it would start in July of 2015.

“We’ve just skipped a complete century. We’ll just go straight to the 21st century when this is hooked up and switched on,” a pleased Mayor Groves said on Friday.

How often does Windorah get on the news? See the hope sprouting from recent rain #9News pic.twitter.com/nZ9MbvzEcM

Today I announced joint funding for a much needed fibre optic cable to improve the livelihoods of remote #Qlders pic.twitter.com/8SlDQ0hxFP

Don't kid yourself the drought is over (this is a football paddock) but there are green shoots of hope #9News at 6 pic.twitter.com/y1llHWF72j

Water in Windorah! A good start but so much more needed! #qldpol pic.twitter.com/X2bCzqpSWs

Wanna see isolated? @AnnastaciaMP goes as far west as you can get … To bring an outback town into the 21st century pic.twitter.com/lJ972Z7QBA

Also took this pic of the famous dunes near Windorah. Such a beautiful part of #Qld #qldpol pic.twitter.com/Gvm2c8oseL

Wherever news breaks … Our chief cameraman and @AnnastaciaMP about as far west as you can get #9News pic.twitter.com/mWiZiBRUDv