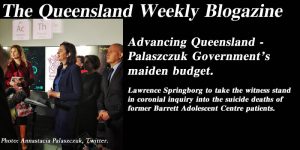 Despite her political detractors saying she wouldn’t last, Premier Annastacia Palaszczuk will deliver her first budget on her 151st day in government.

tues @ 2.30p treas @Curtis_Pitt_MP will reveal how he will pay the bills. dets @7newsqueensland pic.twitter.com/6QCqcd3IyO

Seeking the truth for families

He who would be Premier

Does Qld need more pollies? LNP wants it to be considered: "Some electorates are now bigger than France" #qldpol pic.twitter.com/AjacSmHo10