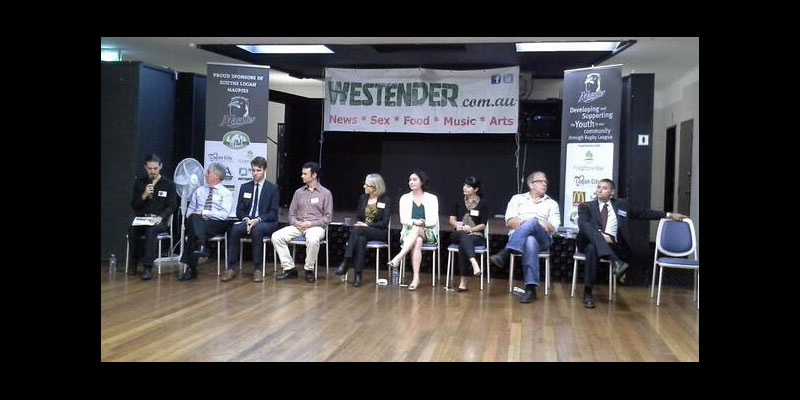 Both Bill Glasson and Terri Butler held virtual ‘town-hall’ meetings in recent days, using new technology which enabled them to talk simultaneously with audiences of 10,000 and more.

These virtual meetings gave all the control to the candidates and their teams, allowed them to target particular sections of the electorate and run polls on voter intentions and priorities.

They selected the questions, determined the options offered for the polls, while the audience got to listen passively, unless of course you were one of the few selected to ask a question.

Well, on Wednesday night in the Griffith inner-city suburb of West End, we got the real thing.

Not a contrived and sterile virtual meeting, but a messy, sometimes raucous public meeting sponsored by the independent Westender online journal. It started late and went far too long, but it was real and exhilarating because we got to hear each other’s cheers and the jeers and sighs of exasperation.

And we watched, sometimes in embarrassment for them, as candidates were put on the spot or fumbled their words.

Most importantly, we got to ask our own questions. It gave control back to the voters, and they loved it. This is what it means for candidates to be on the hustings.

And we got to hear, finally, not just from the Labor, Coalition and Greens candidates, but from the independents and the minor parties who rarely get a public stage.

Ten of the eleven candidates fronted the standing-room only crowd.

@CameronAtfield I'm out laying HSRtrack by hand – I'm about action, not talk like these other so called candidates A Ackroyd #griffithvotes

In a gesture of thanks to organisers, Secular Party candidate Anne Reid posted on her Facebook page the next day: “Candidates like myself for the minor parties don’t always get the airtime and exposure the big parties get, so it is a privilege and an honour when organisations like the Westender show their support for real democracy by providing forums like Meet the Candidates tonight.”

Spencer Howson on ABC 612, following the ALP’s virtual ‘town-hall’ meeting, observed that a number of questions seemed to be about local issues, such as public transport and overdevelopment. Where were the questions, he wondered, on gay marriage, Medicare, climate change and asylum seekers?

Well, all of those questions and more were canvassed on Wednesday night.

Glasson says he relies on Great Barrier Reef marine park authority to make the decision cos they're independent. #griffith

The West End is Labor heartland and Terri Butler got the biggest cheers for the night. It must have felt like being amongst friends, an upbeat way to end the campaigning week for her.

It is not so easy for those who were less warmly embraced. It’s a brave thing to stand before an audience and convince them to vote for you, especially when it is hostile to your position. Family First candidate Christopher Williams felt the brunt of it when he declared his position against same-sex marriage, and Independent Travis Windsor won little favour with his bullish attitude towards the major party candidates.

Independent Travis Windsor stirs up crowd by saying ALP and LNP candidates represent the worst of their parties.

The story of the night was the early departure of Dr Glasson to some accompanying jeers. My understanding of events is that Dr Glasson’s office had advised the organisers the day before the event that he would have to leave early. He was moved forward on the agenda to enable this, and at a suitable time, after each candidate had provided a 3-minute introduction, and after giving answers to some questions that had been submitted on-line, a 5-minute break was announced and Dr Glasson left.

Bill Glasson is leaving because he has another commitment. People are heckling him with "bye bye bill"

The great disappointment for many was that they did not get their opportunity to ask their questions of Dr Glasson. Others wondered about Dr Glasson’s political jugdement, and one commented to me privately that it seemed an odd decision to leave a full house forum that was being covered by live TV and radio. ‘What could be so important?’ people mused.

Dr Glasson’s early departure reminded me of his own widely reported disappointment when his then opponent Kevin Rudd had pulled out of a candidate’s forum in the last week of the September election.

No one could have been more disappointed by Dr Glasson’s departure than the Doctors’ Reform Society vice president, Dr Tracy Schrader, who early in the campaign had issued a challenge to Dr Glasson for a public debate on Medicare. She rose from her seat anyway and addressed her question to Dr Glasson’s empty chair.

@GriffithElects @drsreform copayment will hurt most vulnerable patients and a wrecking ball for Medicare. No money savings here, just pain.

Dr Schrader issued a statement on Thursday outlining her issues and her disappointment.

Questions (and some statements) continued on issues ranging from euthanasia to funding for the ABC, and the Trans Pacific Partnership agreement.

With a live audience there is often humour, and we weren’t disappointed.

"I got a brain freeze; there's an amazing moustache over there" – Timothy Lawrence, SPP candidate, lightens mood at #griffithvotes debate

Secular party candidate gets laughs by saying we have an "invisible, odourless, weightless science minister" #griffith

It was a very long night for many. I was tired and I felt for the candidates, most of whom stayed on to be interviewed by ABC 612 or other media.

Hear the candidates for yourself in this excellent and comprehensive report on the forum by Steve Austin of ABC 612.