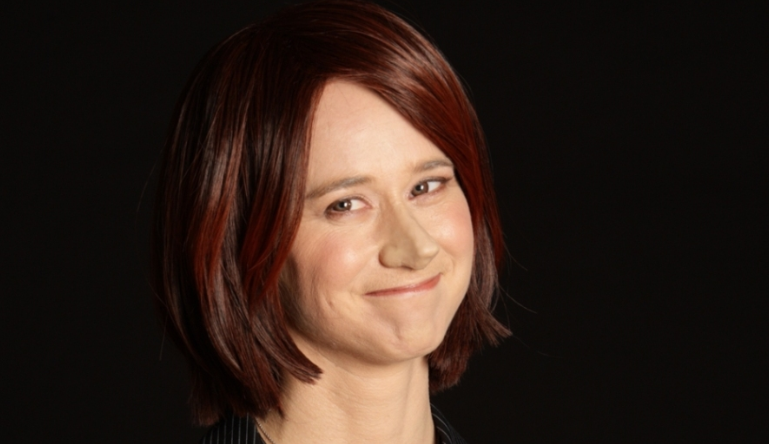 As Julia Gillard made her way through parliamentary ranks before, during and after Kevin07, the political satirists of Sydney Theatre Company’s Wharf Revue recognised they’d need to find an actress to portray the woman who would become Australia’s first female Prime Minister.

From her knockout live performances, to her starring and co-writing roles in the controversial At Home With Julia on the ABC, actress Amanda Bishop has become synonymous with the role of Julia Gillard.

Bishop spoke with No Fibs this week about what it takes to succeed in satire, and the consequences of your subject being a politician, prone to the whims of voters and internal party tactics.

We often highlighted the triviality that characterised her treatment and juxtaposed it with her seriously heavy hitting political mind.

“Audiences would cheer at the first two spoken words!” Bishop said of her early stints as Julia Gillard for the 2008 Wharf Revue. “They seemed to both delight and cringe at the sound, and we knew we were onto something. They enjoyed her humour”.

“When I auditioned for the revue, Julia was the Deputy Leader of the Labor Party and Kevin Rudd had just won the election for Labor. The female in the revue plays many roles and the writer/directors (Jonathan Biggins, Drew Forsythe and Philip Scott) had their eyes on the lady with the interesting voice, coming up through the ranks of the ALP.

“The Revue that year was called Waiting For Garnaut and Julia appeared as ‘Sister Gillard’ a novice of the abbey, in a musical scene called ‘The Sound Of Rudd’. She sang her version of ‘The Lonely Goatherd’, all on one note.” 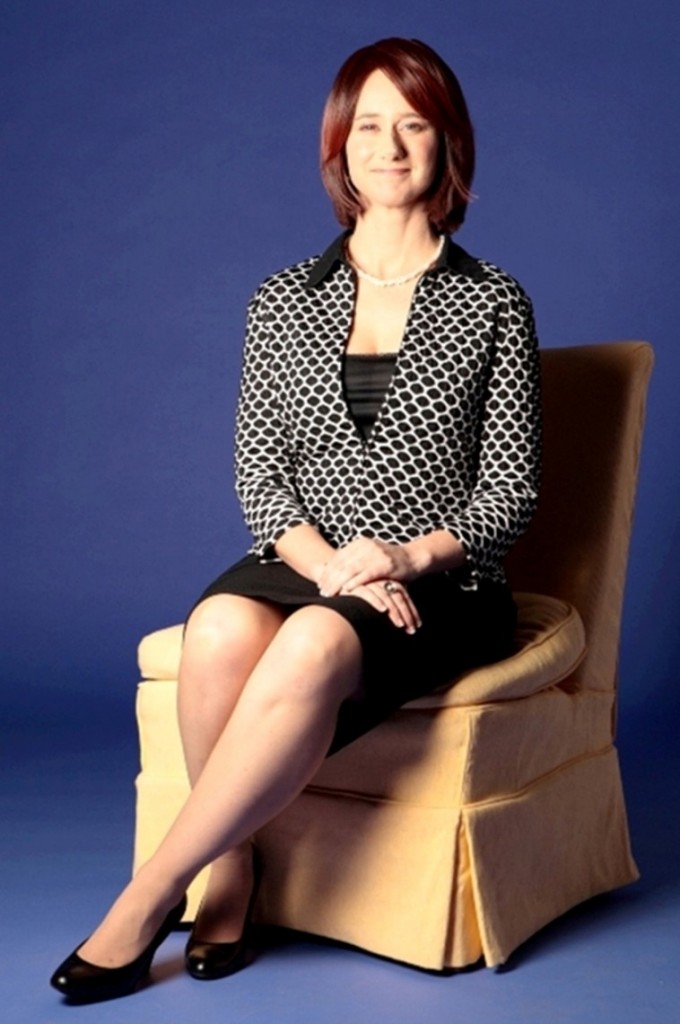 So what was it like to impersonate a politician who’s in power?

“I love this question because it has never happened for a female in the European history of Australia,” Bishop says. “It was exhilarating to play a female who had to be listened to by, well, by the country, for three years, and her male colleagues. It was genuinely interesting because the real Julia endured so much criticism with grace”.

“In the Wharf Revue, both sides of politics are covered, so I still play her now, I’m lucky. It’s only when that ‘character’ leaves politics altogether that an actor needs to let go!”

What kind of loyalty does Bishop feel towards Julia Gillard when portraying her?

“I have great respect for her, and I probably feel warmer about her than if I hadn’t played her, but not because of what she did. Rather, I think I got to see just how thick-skinned she was to have continued serving while dealing with undesirable media attention, public criticism and being the first female in the position.

“Naturally, she confronted many sensibilities, whether we wish to admit it or not.

“Every time something happened that was all over the media, we’d put it in the show, such as the shoe coming off outside the Parliament House café when she was whisked away by the security guards. Such a small thing, publicised ridiculously.

“That was a gift in the end, we often highlighted the triviality that characterised her treatment and juxtaposed it with her seriously heavy hitting political mind and activities, and her sense of calm.

Has Bishop ever met her subject?

“Many journalists attempted to organise it, but apparently she was busy running the country or something. I certainly don’t demand attention on that front, and I’d love to meet her if the opportunity arose. In a strange way it feels like we’ve already met.”

There’s so much fun to be had, discovering the politicians through art.

Over its ten years, The Wharf Revue at the Sydney Theatre company has become a theatrical institution which has satirised four Prime Ministers and five cabinets (when we count KRudd twice). Amanda Bishop has been an integral part of that team for six years.

“I enjoy working with the Revue creators. I learn enormous amounts from them, as they’ve been doing it for longer than me. They are hilarious to work with too, a mix of the cerebral and the silly,” she says. “When I first get their scripts, I’m googling madly in my lunch breaks to understand the many, many, well-informed historical and current references, be they political, cultural or just downright funny.”

What preparation did Bishop undertake to nail such a pivotal role in her career?

“Lots of watching her in question time, I find it’s where we see our politicians at their most theatrical. I drew her, I also listened to her a great deal.

“We can do an exact replica, or we can take elements of ‘impersonation’ and then build a character from there,” Bishop says, explaining the basic challenge of satire. 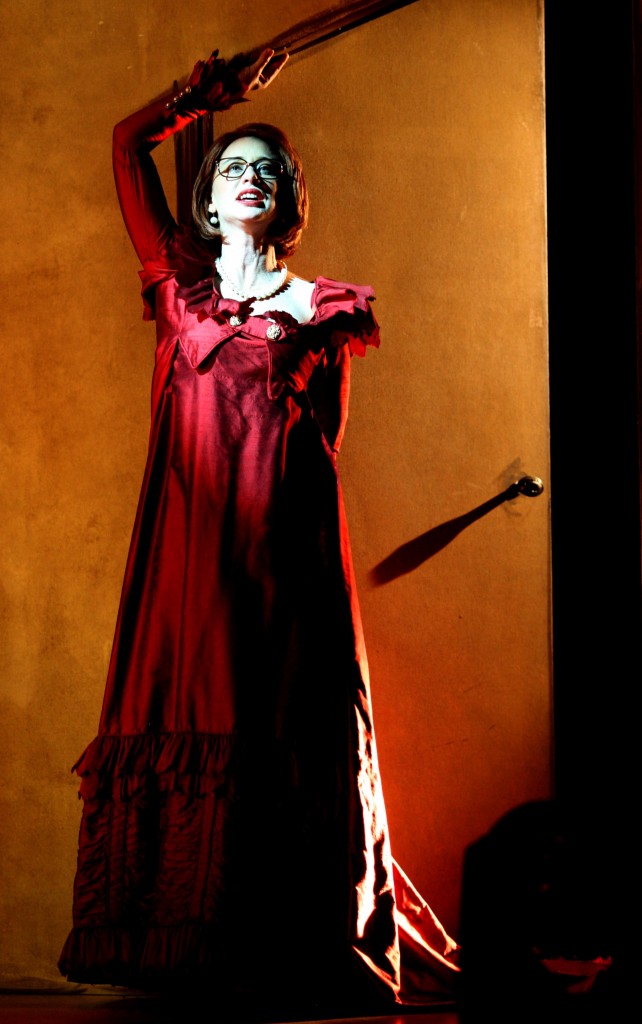 “The reason we build a character is because often we actors play a real person in situations they may not normally be in.

“For example, Julia sings Carmen’s ‘Habanera’ in this year’s revue, so we have to transition from a typical press conference situation, and, using the elements that are most strongly recognised (voice, hand gestures, stance, costume) take them into the world of make believe.”

Bishop’s work as Julia Gillard has also translated to the small screen in a number of incarnations.

“In television, I learnt a great deal from Paul McCarthy, who played Kevin Rudd, Tony Abbott, and Malcolm Turnbull in the series we did called Wednesday Night Fever recently on the ABC. He is an incredibly generous peer and his transformations are exquisite.”

Now that Julia Gillard has moved on from politics, what does Bishop think is in store for satirists?

“I actually think it’s another interesting time. We have Tony Abbott, who’s been in the public eye for some time now, but with him on his front bench, there’s much newer blood: Joe Hockey and Christopher Pyne, and in Labor, well, there’s been so many changes, they’re all new. There’s so much fun to be had, discovering the politicians through art as much as we discover them through their own work.

And what’s next for Amanda?

“I’m still performing Julia until Christmas. Then I’m going to New York to work, and so is Julia, apparently. Poor thing, I hope I don’t bump into her in a bad mood! I hope I get to thank her for the education she gave us.”

Thanks to Lisa Mann Creative Management and Sydney Theatre Company for their assistance in facilitating this interview and images.