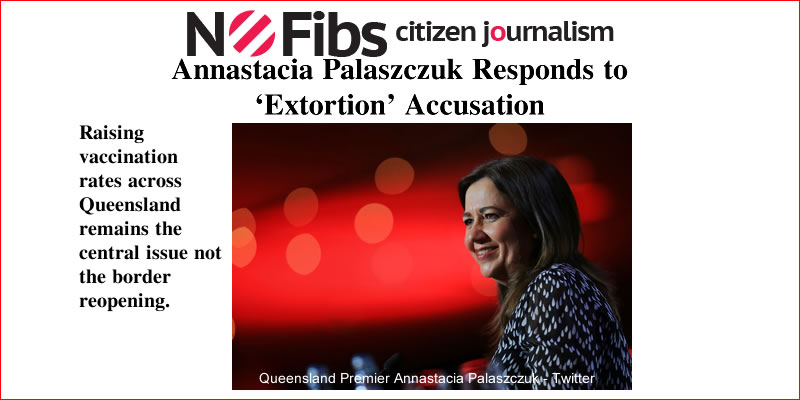 On Sunday ABC Insiders, Prime Minister Scott Morrison’s accusation was re-aired that the Queensland Premier Annastacia Palaszczuk was engaging in holding the federal government to ‘ransom’, ‘extortion’ and ‘shakedown politics’ by asking the Commonwealth for more support for the national hospital system as the country neared its covid-19 vaccination targets.

David Crowe supported the government in their increased hospital contribution from 2013 which he says has risen by 70%. Singling out Queensland, he pointed to a budget surplus of $150 million in 2025 and agreed with the PM that the state government should issue bonds (debt) to fund their hospital system.

While the Commonwealth had stepped up the funding for hospitals, Katharine Murphy agreed that the states were correct and that the opening up of the country will increase the costs of running hospitals from the pandemic. The conversation then drifted off into tax cuts.

Not shown in the Insiders segment was Premier Palaszczuk’s response to the ‘extortion’ accusation. The transitioning out of hospitals of aged care patients and people with complex disabilities to federal run facilities would free up resources.

Premier Palaszczuk went further the next day explaining that it was part of the national plan to look at covid-19 vaccine boosters, a schedule for unvaccinated children and how to manage increased hospital capacity across the nation.

Being constantly asked about Queensland’s border re-opening, Premier Palaszczuk reiterated that the vaccination rates across the state remains the central issue.

Queensland Health Minister Yvette D’Ath also revealed earlier in the week that all the nation’s health ministers had written to the federal health minister Greg Hunt because the covid-19 funding guarantee had ended on June 30.

Australia Medical Association Queensland President Dr Chris Perry agreed that there was a national funding problem from multiple governments over the years on hospital funding across the entire country.