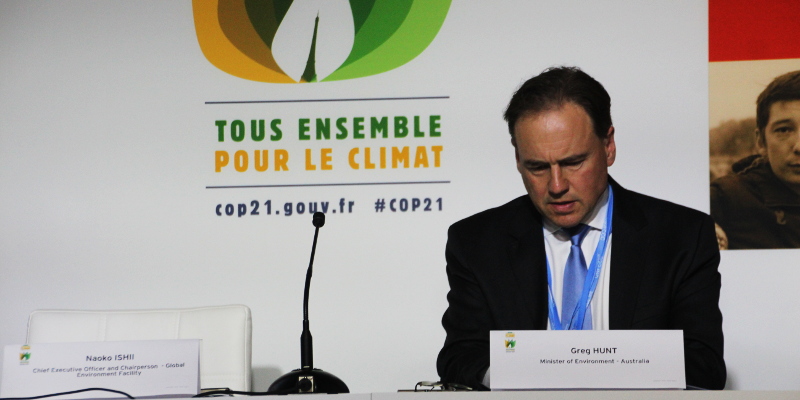 As Environment Minister Greg Hunt departs after the first week and Foreign Minister Julie Bishop takes over negotiations at the UN climate conference, Australia has supported inclusion of the 1.5 degrees limit in the main draft text along with the 2 degrees limit, according to the Sydney Morning Herald.

This is an important goal for many of our Pacific neighbors and nations of the Climate Vulnerable Forum. One hundred and eight nations, so far, have said they want this lower limit included.

#Germany officially supports the 1.5deg goal along with 108 other countries from the #climatevulnerableforum #COP21 pic.twitter.com/lPjB1n2Byc

Among civil society there is strong support for this limit with a photo campaign at one of the exhibits in Hall 4. Yes, I stepped up for a photo and made the #1o5C sign with my hands.

The problem for Australia’s negotiating team is our own weak targets and emissions trajectory. But despite this, Australia’s diplomatic and negotiating efforts have been broadly welcomed by other parties.

Kellie Caught, National Manager Climate Change at WWF-Australia, said “If other countries took on similar pollution reduction targets, the world would be on track to warm between 3 to 4 degrees, with devastating impacts on the people and places we love.”

While this announcement of support for the inclusion of 1.5C target is welcomed by climate, environment and youth NGOs here in Paris, it stands at odds with Australia’s track record on emissions reduction and minimal financial commitment to the Green Climate Fund.

“Economic modelling has repeatedly shown that stronger targets both are doable and desirable.” she said.

Indeed, Warwick McKibbin’s government commissioned analysis for the Government’s post 2020 target indicates there is clear room for improvement in climate targets with only slight impacts on GDP growth.

Agreement to Support 1.5 degrees in the text comes with a trade-off: Australia gained support for carbon accounting rule changes to allow Australia to carry forward carbon credits for land use changes. You can read more on this by Peter Hannam and Tom Arup at the Sydney Morning Herald: Paris UN Climate Conference 2015: Australia backs target of limiting warming to 1.5 degrees.

But it is not only government’s stepping up to support the 1.5C limit. Some business leaders, including Richard Branson, have come out in support of keeping the 1.5C goal, according to the Guardian

“We believe that net zero by 2050 would at least get us to 2 degrees, leaving the door open for further reduction to 1.5, which should be something we should be looking at in the future,” said Jochen Zeitz, the former chief executive of Puma and founder with Richard Branson of the B Team. “We believe the business case for net zero in 2050 is irrefutable,” Zeitz told a seminar on Sunday reported the Guardian.

On Friday I attended two Youth events on the Champs Elysees in the UN Blue Zone which focussed on the 1.5C limit.

The first was put on by Latin American Youth organisation Engajamundo. This was a creative event involving a limbo rope marked with a 1.5 degrees C sign. There was music and calls for people to go under the rope in limbo fashion. “How low can you go” the crowd chanted and encouraged people to dance under the rope.

It was a fun activity, a call to enshrine and commit to 1.5 degrees as a safe limit. Indeed, more than 100 countries have endorsed the 1.5 degree level and want to see it as part of the agreement. It wasn’t only youth observers that participated, but a few ‘Party’ delegates, and members of the press. I, too, danced under the rope with my Brenda the Civil Disobedient Penguin T-shirt on. (Thanks @FirstDogOnMoon).

Next up was an action by Australian Youth Climate Coalition delegates. Their chanting “Your choice, our future” was more predictable and prosaic. Once again, youth emphasised the importance for survival of the 1.5C temperature limit. A Survival Declaration that reads “We will do what it takes to ensure the survival of all countries and peoples.” was signed for Australia by Environment Minister Greg Hunt. Watch the video. This includes a short statement from a Chinese delegate saying that China has also endorsed this declaration.

According to what I have heard, the Australian delegation is playing a relatively constructive role in negotiations.

Kellie Caught from WWF said that Australia is facilitating bridging and compromise between parties.

She reports that “The draft agreement includes most of the ingredients of an outcome in Paris that can further boost global action and support vulnerable countries. However countries are still holding tight to entrenched positions, Ministers must now focus on what’s in the interest of the planet and the people and places we love, and ensure they chose the options that will create a fair and ambitious agreement.”

The final result in Paris may well depend on how well finance and technology packages are offered and concluded between rich and poor countries.

Just keep in mind that G7 countries along with Australia spend 40 times more on support for fossil fuel production than they do in contributions to the Green Climate Fund. Australia, Canada, France, Germany, Italy, Japan, the United Kingdom and the United States account for some $80 billion per year in public support for fossil fuels, while their total pledges to the Green Climate Fund only amount to $2 billion per year.

While there is $452 billion spent globally in public support for fossil fuels from G20 countries annually, there is only $121 billion in renewable energy subsidies on the global level per year. Although the latest announcements at the start of the conference From India, Africa, and from business suggest investment in renewables is growing rapidly.

We need a fair deal that recognises the historical disparity in carbon emissions and assists developing countries in financial and technological support. That will ultimately determine the quality of the Paris agreement at the end.