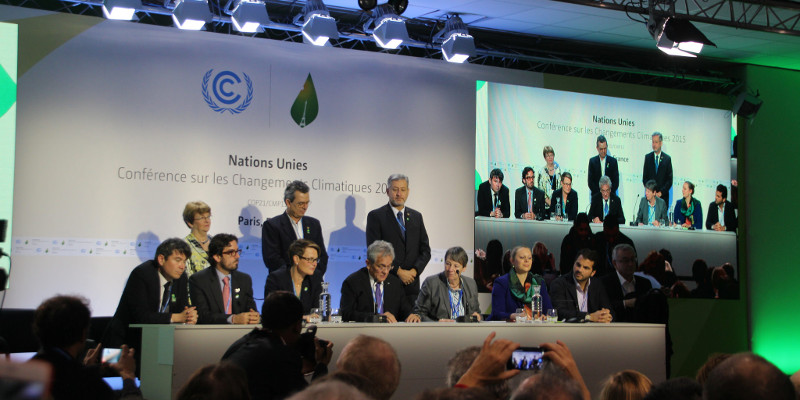 On Friday afternoon with the talks drawing to a close I attended a press conference called by the Marshall Islands. It featured Tony DeBrum, the Marshall Islands Foreign Minister, as well as several ministers in the Coalition of Ambition here at the Conference of Parties.

This new grouping is not a negotiating bloc, but a coalition of parties that want to emphasis and push for much higher ambition at these talks.

Tony De Brum said “You’ve read things in the media. We want you to hear from us directly. The High Ambition Coalition is emerging as a result of collective efforts of developed and developing countries.”

It is a cross section from major groups. De Brum claimed that 90 countries are part of this coalition, but it is not a negotiating group. The coalition is about connecting voices, big and small, rich and poor for forging a joint effort to fight together on climate change.

“We will not accept minimalist or bare bones agreement”, he said.

He articulated that the coalition wants an Ambition mechanism which should be at the beating heart of the Paris Agreement. Also, formal recognition of the 1.5 degrees C temperature target in the agreement, clear pathways to decarbonisation, 5 year reviews to ratchett up ambition, strong financial support including $100 billion per year from 2020.

“We will not trade these off against each other” De Brum said. He was encouraged to see many of the elements there in Thursday evening’s draft agreement text, but said there is still a long way still to go.

At the press conference it was announced that Brazil is the latest country to join this Coalition.

Norway’s Minister for the Environment and Climate Change, Ms Tine Sundtoft, said that she had enjoyed seeing this group grow bigger. “We need good compromises across groups” she said.

Barbara Hendricks, the German minister, was on the panel and said Germany was proud to be part of the Coalition of Ambition. She articulated that Germany wants to see a strong Long Term Goal with reference to the 1.5 degree C temperature target in the agreement, as well as 5 year reviews to raise ambition.

We welcome other countries to join, but they must bring higher ambition – @MinisterTdB pic.twitter.com/JKe6sBkprn

At an earlier press conference Teixeira said “if you want to tackle climate change, you need ambition and political will. Brazil proudly supports the high ambition coalition.”

The “high ambition coalition” includes African, Caribbean and Pacific countries along with the United States and all EU members.

Todd Stern, the US envoy said in joining the Coalition, “The high ambition coalition is exactly what we need right now. There are a great many countries in this coalition, there are some countries that are not in this coalition and indeed seek a more minimal outcome. “We need a very strong and balanced transparency article so everybody knows what we’re doing with respect to those 184 or 186 INDCs that have been put forward.”

A question from the floor asked where was the European Union? Carole Dieschbourg, Luxembourg’s Minister for the Environment and current President of European Union came forward and spoke briefly to endorse the Coalition goals.

I tweeted out to Julie Bishop, Australia’s Foreign Minister, saying that I was ashamed that Australia was not standing with the Coalition of Ambition. I have been sending the occasional tweets to Ms Bishop through the conference which we are both attending.

Thks @MinisterTdB & ministers in Coalition of Ambition. Ashamed that @JulieBishopMP isn't there for #Australia pic.twitter.com/zEKElH6VG5

I was surprised when Julie Bishop replied and announced on twitter that an invite to Australia to join the Coalition of Ambition had been made and that Australia had accepted that invitation. A little unusual for such a public announcement to be made on twitter to a citizen journalist. It is the first time that I am aware this stance by the Australian Government has been made to join the Coalition of Ambition.

We have accepted an invitation to join so no need for your 'shame'. https://t.co/wBvFjIBgZ8

and my reply to Julie Bishop:

@JulieBishopMP @MinisterTdB that is great news, but Australia needs to walk the talk as well on finance, greater targets & #climate action

The Guardian reported that De Brum told the media, “we are delighted to learn of Australia’s interest and look forward to hearing what more they may be able to do to join our coalition of high ambition here in Paris.”

He said all countries were “welcome to join” but needed to “bring your credentials with you.”

On current standing Australia’s climate actions are pretty piss poor, with a minimal contribution to the Green Climate Fund taken from a slashed Foreign Aid budget, pre-2020 and post-2020 targets that a among the lowest in the developing world, an emissions reduction policy that pays some polluters to stop polluting courtesy of the taxpayer from the Direct Action Emissions Reduction Fund.

Australia is rated as a climate laggard. While the flexible and constructive diplomacy by Australia in negotiations in Paris have been welcomed broadly by other Parties, there is a huge inconsistency between Australia’s diplomatic stance and the extent of policy action on climate change domestically.

The Fossil of the Day award to Australia highlights this gross inconsistency. It was made in particular response to Bishop’s comments on coal at a forum on Sustainability.

China is one of the countries standing firm on its demand that rich countries like Australia should bear a greater burden than developing ones in reducing emissions and helping countries cope with global warming.

I caught a presentation by Marshall Islands Foreign Minister during the first week of this conference. Here is his speech on the ocean challenges with climate change facing the Marshall Islands and Micronesia.

Update: After the Paris agreement was delivered and agreed to, Minister Tony De Brum gave Julie Bishop a Coalition of High Ambition Pin.