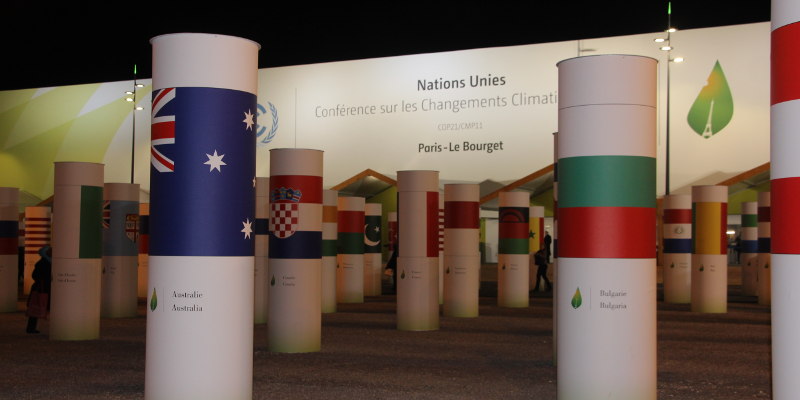 Australian Prime Minister Malcolm Turnbull waltzed onto the stage at the UN Climate Conference Loire plenary room on Monday afternoon. He was suave and eloquent. All style, but there was little of substance, or new commitments in his speech.

He announced that Australia was not only going to meet our 5 per cent target by 2020, but we were going to exceed it. “We will meet and beat our 2020 emissions reduction target.” he said.

But he gave no commitment to actually setting a new pre-2020 target to aim for.

Our current pre-2020 target puts us at the back of the pack with regard to carbon pollution reduction effort prior to 2020.

If every country took this attitude, then the world would be well on the way to 4 degrees global warming.

And the real sticking point is that Australia will exceed this target not essentially from any positive climate policy program of the Government but mainly due to large industrial and manufacturing closures and restructuring (closure of automobile industry, closure of aluminium smelter) and lower consumer demand for electricity. All us small people installing solar panels or solar hot water systems has also had an impact on electricity demand. Over 1.4 million homes are now in the solar PV revolution contributing to lower electricity demand.

It is clear Australia needs to step up it’s action. Over 170,000 Australians marched over the weekend for greater climate action and climate justice. Melbourne had it’s largest climate rally ever with 60,000 people. We saw some of the biggest climate rallies in the world which should tell Malcolm Turnbull something about public opinion on this issue.

In his speech Turnbull announced ratification of Kyoto Protocol 2: this is the legacy agreement to take us to 2020. The Government has been sitting on this for a long time, and while welcome, only signifies a small change in emphasis, but never the less, is welcome.

The Government should have used the opportunity to formally increase Australia’s 2020 carbon pollution reduction target at least in line with the Climate Change Authority recommendation of 19 per cent, but perhaps as high as 25 percent as was in our conditional range stated at Copenhagen in 2009.

Or used the opportunity to start the phase out of fossil fuel subsidies as recommended by the International Energy Agency, International Monetary Fund and World Bank. Instead he caved in to the Liberal Party right wing and National Party members and refused to sign the Fossil Fuel Pledge adopted by 40 nations on the first day of the summit.

There was mention of Australia participating in the Joint Innovation Fund and doubling investment in Research and Development, also welcome. But it comes after deep cuts to science and technology in the past two Australian budgets.

Turnbull could have announced an increase in Australia’s renewable energy target which would have added substantial momentum to energy transition and renewables in the near term, but he chose not to. We are already well on the path of 100 percent renewables and such an announcement would restore confidence in the Government assisting this transition.

For Climate Finance Turnbull announced $1 billion over 5 years. But this is not additional to Australia’s Foreign aid budget, which was massively slashed during the first two years of this government. Nothing new here, just a reallocation of aid from a dwindling aid budget aleady going to help the most needy nations mostly in the Pacific region.

Climate change impacts are an additional challenge for communities in the Pacific and it should require additional funding to build climate resilience and adaptation, not a redirection of aid from much needed poverty reduction programs.

The amount committed to climate finance represents no increase above the level Australia has previously provided: about $200 million per year. It is far less than other developed nations like Canada, UK Germany and France are committing. We are miserly with our climate finance commitment.

The finance commitment falls far short in the view of Australian NGOs who have campaigned for Australia to ramp up climate finance to $1.6 billion per year by 2020.

A review to increase climate targets in 2017, would be welcome, but seeing as we have already done so well, perhaps it is time to increase the target much earlier in accordance with scientific and international comparable recommendations.

It is important that Australian negotiators push for inclusion of a 5 year cyclic review mechanism (Paris ambition mechanism), where targets to cut pollution emissions can be increased over time, including a review before 2020.

PM chalks up a symbolic victory in Paris, but may struggle to achieve more (Better than Abbott but not much else!) https://t.co/6k0eqmffgy

Reaction from NGOs in Paris

“It is encouraging that Australia has recognized the importance of supporting developing countries in the fight against climate change. Progress on this front is going to be critical to reaching a fair and effective climate agreement and is at the centre of negotiations in Paris this week.

“However, it is disappointing that the funds committed – at least $1bn over the next five years – will be drawn from an already diminished aid budget and represent no increase to what has been committed before. In fact, it is far less than what comparable countries including Canada, UK, Germany and France have recently committed to.”

There was similar reaction from other Australian NGOs here in Paris.

Kellie Caught, National Manager Climate Change WWF-Australia, welcomed Australia’s decision to ratify the second commitment period of the Kyoto protocol and identified the action as assisting to build trust in the international negotiations. But she also stressed it should have been an opportunity to lift our targets.

“WWF is calling on the government to use ratification as an opportunity to formally increase Australia’s 2020 carbon pollution reduction target, after the PM said Australia will meet and beat the target. Research by ClimateWorks, shows Australia can increase its pollution reduction target to 25{17ac88c265afb328fa89088ab635a2a63864fdefdd7caa0964376053e8ea14b3} by 2020 (on 2000 levels) based on current technology.”

Australian Council for International Development Chief Executive Officer, Mr Marc Purcell, was scathing saying that the announcement delivered nothing new of consequence. “Let’s be clear – this is not new money,” said Marc Purcell. “While we welcome the Government acknowledging the climate change challenges faced by our Asia-Pacific neighbours, this announcement lacks any ambition.”

So the style of Turnbull has definitely changed from Abbott, but there is little substance.

On the morning of the leaders summit, outside the conference venue, delegates were greeted by the Climate Guradian Angels. Here is climate angel Liz Connor explaining briefly to the media why they protested:

and the political reaction

Bill Shorten held a doorstop interview in Paris at the Le Bourget conference centre and told reporters, “Today Malcolm Turnbull has turned up and played it safe,” he said. “He’s keeping the right wing of his own party happy. He is really basically, with a slightly different rhetoric, implementing the substance of Tony Abbott’s climate change policies which were notorious for not being serious.”

He added: “The whole point of gathering is not just to do very little and just commit to the second stage of Kyoto, it’s to move beyond that,” he said as reported by Desmoguk: Australia ‘Implementing Tony Abbott’s Policies’ at COP21 Says Opposition Leader.

'Cognitive dissonance': n.; a government purporting to care about climate change in Paris while its Ministers laud coal during #qt at home

…and what the media said

So Turnbull’s speech, though suave, was lacklustre. It didn’t take any risks, it made no new substantive action on climate change. Turnbull just coasted in the limelight of not being Abbott. And that was lazy and simply not enough. It ignored the tens of thousands of ordinary people who marched over the weekend in Australia. It ignored a recent Lowy Institute survey that said a majority of people wanted Australia’s targets lifted.

Australia and Canada both changed Prime Ministers recently, but only one has shown clear signs of changing climate policy. You guess which one.

From Australia we come with confidence and optimism.

We are not daunted by our challenge.

It inspires us. It energises us.

We do not doubt the implications of the science, or the scale of the challenge.

But above all we do not doubt the capacity of humanity to meet it – with imagination, innovation and the prudence that befits those, like us, who make decisions that will affect not just our own children and grandchildren but generations yet unborn.

And Mr President while we come to you in Paris with our deepest condolences, we bring you the most resolute solidarity in our common cause for freedom in the face of terrorism.

It is an agreement that must drive humanity’s capacity for inventiveness and a new wave of technological advances.

I join over 150 leaders in calling for a strong and effective agreement.

This is an extraordinary effort.

For Australia’s part, our 2030 target represents real economic effort, and will halve our per capita emissions – one of the biggest reductions of any G20 country.

We will meet and beat our 2020 emissions reduction target.

Today I announce that Australia will ratify the second commitment period of the Kyoto Protocol.

We firmly believe that it is innovation and technology which will enable us both to drive stronger economic growth and a cleaner environment.

We are a highly social and innovative species and so the more we share innovative technologies, the better they will become.

Today Australia joins with many other countries in supporting Mission Innovation which aims to double investment in clean energy innovation over the next five years.

Australian universities are at the forefront of energy and climate science innovation.

To give one example, the University of New South Wales has held the world record for solar cell efficiency for 30 of the last 32 years.

And by 2018 over 60 per cent of the world’s solar cells are to use technology developed by Australian researchers.

But our task, and that of the technologies we deploy, is not just to reduce emissions.

The impacts of global warming are already being felt and will continue to be so even after we reach global net zero emissions.

Adaption to the impacts of climate change is equally important and there too innovation is a key.

Some of the most vulnerable nations are our Pacific neighbours and we are helping them to build resilience through practical action and assistance.

To this end, Australia will contribute at least $1 billion over the next five years from our existing aid budget both to build climate resilience and reduce emissions.

Our agreement here in Paris must provide a common platform for action, the dynamism to builelegantd ambition and a robust and transparent reporting system.

Australia is not daunted by the challenge. With great optimism and faith in humanity’s genius for invention, we are confident that with your leadership, Mr President, we will, in common cause, secure our future.

So, Malcolm Turnbull’s leadership on climate is pretty much as I explained in Can a leopard change it’s spots article and Australia’s Climate stance for COP21.

I will be following closely to see if Australia is obstructive at these climate negotiations rather than just a climate laggard not doing it’s fair share of pollution reduction and support for other nations in more dire circumstances.

I had the opportunity to be part of a briefing between Australian NGO representatives and Labor Opposition Leader Bill Shorten on climate action and COP21 on Tuesday. I look forward to a Ministerial briefing next Monday with Foreign Minister Julie Bishop (and perhaps another photo opportunity for even handedness).