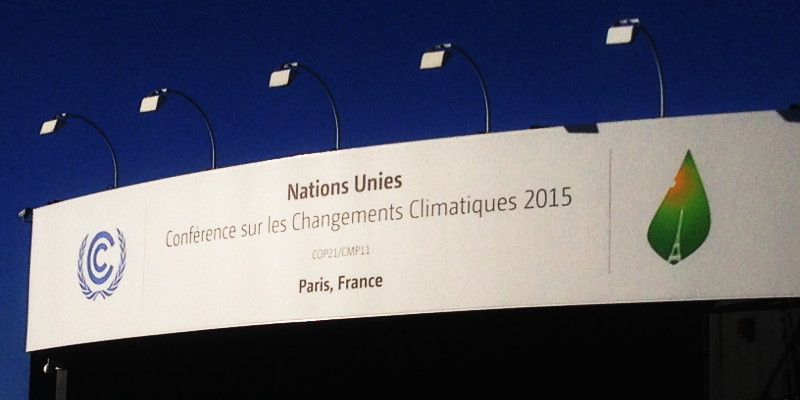 According to a Lowy Institute public opinion poll conducted in October-November 2015 over half of Australia’s population believes that climate change is “a serious and pressing problem. We should begin taking steps now even if this involves significant costs”.

Over the last few years concern has been steadily growing about climate change and the need to take action. The Lowy Institute points out that this is an increase of 16 percentage points since 2012 to 52 per cent.

Another 36 per cent of people reckon that “The problem of global warming should be addressed, but its effects will be gradual, so we can deal with the problem gradually by taking steps that are low in cost.”

Just 11 per cent of people believe we “should not take any steps that would have economic costs.”

On climate targets, 62 per cent of people think we “should be prepared to make stronger commitments on emissions reductions in the interests of reaching a global agreement”. Malcolm Turnbull and Greg Hunt should keep this level of support in mind when they meet other heads of state and our diplomats start negotiating a climate agreement in Paris atthe UN climate conference.

Australia’s current targets are widely seen as inadequate, ethically and scientifically, and according to the Lowy opinion poll most people would support lifting the targets to help achieve a global agreement. Only 36 percent of people said we should stick to our current target regardless of what other countries do. 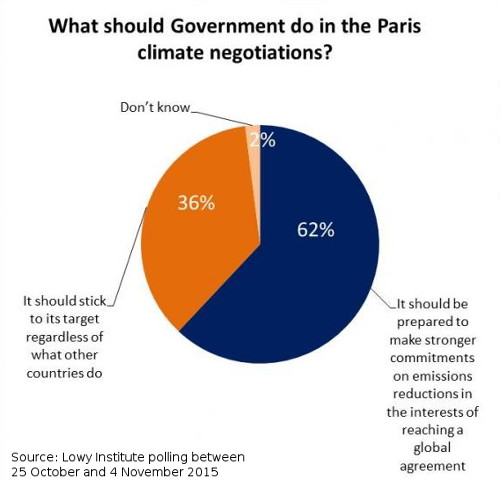 In June 2014 public opinion polling showed that Climate leadership was demanded of the Australian Government. It wasn’t forthcoming.

The third question asked by the Lowy Institute survey was on which mechanism was preferred for reducing emissions: the Government’s Direct Action plan; or an emissions trading scheme or price on carbon. A bare majority favoured the direct action model while 43 per cent favoured an ETS or carbon pricing.

The Lowy Institute found 43 per cent continued support for an ETS or carbon pricing surprising, yet it shows the debate is far from over in Australia, especially as on an international level carbon pricing is growing among nations and sub-national governing regions. How we reduce emissions in Australia, it seems, will continue to remain politically contentious.

At the end of 2013 opinion polling showed support for carbon pricing and climate change action, despite ‘the Axe the Tax’ rhetoric from the Liberal Party that was used to wind back Australia’s carbon pricing policy.

Both the Labor and Liberal National Parties should look at their current pro-coalmining attitude which seems to be more and more out of synch with popular opinion.

Recently the President of Kiribati, Anote Tong, visited Australia and urged the government to adopt a no new coal mines policy to reduce greenhouse gases and support Pacific Island and vulnerable nations in their call for 1.5 degree limit at the Paris climate talks.

Nobel Laureate Professor Peter Doherty argues at the Conversation that Australia should back calls to end coal and save its drowning neighbours.

The response was that 60 per cent of those polled think that the world leaders need to act on climate change now or in the next 12 months. Another 12 per cent said action needed to be taken in the next 5 years.

There has also been strong support over many years for renewable energy. This is seen in the 1.4 million households that have installed solar PV. In July 2015 opinion polling found that most people wanted renewables prioritised over coal in the energy sector.

The latest polling comes as 147 world leaders meet on Monday 30 November in Paris at the UN climate conference. Australian Prime Minister Malcolm Turnbull will be attending for the leaders summit on the first day. Environment Minister Greg Hunt and Foreign Affairs Minister Julie Bishop will lead Australia’s negotiating team over the following two weeks of the conference.

175 countries have now published their climate action plans, called INDCs. This covers about 93 per cent of the world’s emissions. There are 195 countries that can participate in the conference.

After the leaders summit, it is expected diplomats and appropriate Ministers will engage in the task of negotiating a climate agreement that will come into effect from 2020.

147 Heads of State and Government will attend the #COP21 https://t.co/JWGQseBPm8 pic.twitter.com/ubePYWYGHZ

Speeches by the heads of state will be delivered concurrently in two plenary rooms: Seine and Loire (named after two of the prominent rivers in France) and will occupy most of the day.

Prime Minister Malcolm Turnbull is due to speak in the Loire Plenary room after lunch between His Excellency Mr. Teodoro Obiang Nguema Mbasogo, President of Equatorial Guinea and Her Excellency Ms. Erna Solberg, Prime Minister of Norway. The speaking list is in accord with UN protocols based on date of when the acceptance was received.

At 6pm a carbon pricing panel, chaired by the World Bank and the IMF, will occurr in the presence of the American and Chinese Presidents among others. This panel discussion is to encourage debate at heads of state level on support for international carbon pricing.

There is strong momentum for a climate agreement, much of it motivated by France, but also the major emitters like China and the United States. As always the devil is in the detail. You can read my summary article on Australia’s negotiating stance.

A recent twitter Q and A by Catherine A. Novelli (@CathyNovelli), US Under Secretary of State for Economic Growth, Energy and the Environment elicited this question and response:

Anna Hindley asked “What would the U.S. define as a successful outcome to #COP21? #AskNovelli”

Catherine A. Novelli (@CathyNovelli) replied: “A strong, durable agreement that puts the world on the path to limiting temperature increases to below 2 degrees C.”

A strong, durable agreement that puts the world on the path to limiting temperature increases to below 2 degrees C. https://t.co/HuQ46wIEdh

Environment Minister Greg Hunt was “confident we’ll get a good global agreement”. In speaking at the National Press Club in Canberra, he believes an agreement in Paris will be reached:

"My deepest hope and belief is that the world will achieve an agreement on climate change in Paris" #NPC pic.twitter.com/YoMol1HKta

Update:
A question at the National Press Club from Lenore Taylor from the Guardian on Australia already meeting it’s low 2020 target. Her question was ‘why if Australia is on track to meet our targets, we should not go for deeper targets, or is it about overshooting the 2020 target so we can carry over emissions for 2030?’

Greg Hunt’s response was:
“The rules for the post-2020 period haven’t been set yet but what I’d say is this. Firstly, all that the planet knows is if we actually achieve and beat our targets, the overall load of CO2 will be reduced.

“Secondly, it then allows us – as you say -to consider, once we know the rules for the post-2020 period, the way in which we can carry over, as has happened, any additional surplus which we might have. And between now and 2030, there is, in my mind, no doubt that we will all be asked to come back, probably in 2020, probably in 2025 and then again in 2030, to review, to update the stocktake and reset more ambitious targets.”

Lenore Taylor’s summary: “So I think that is a yes. It would be handy to keep the emissions targets low in order to bank some savings so as not to make it too hard.”

It is all about Australia being self-centred, to see how much we can get away with in the schoolyard of nations in the short-term, ignoring the reality of climate change bearing down and already impacting us all in increased frequency and intensity of extreme weather events such as floods, storms, bushfires and heatwaves. Nature really does bat last and we will all pay the price.