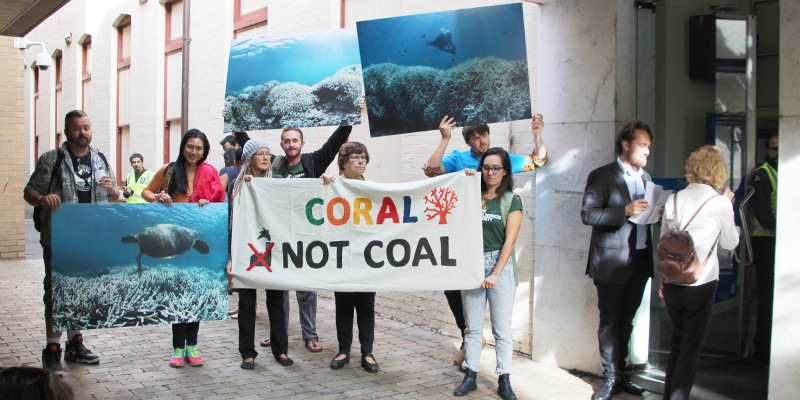 The Indian Finance Minister, Arun Jaitley, was in Australia for 4 days trying to wrangle investment money for infrastructure projects in India, but also potentially including the the giant Adani proposed Carmichael coal mine in the Galilee Basin of Queensland.

It was reported in Indian media (1, 2) before Jaitley left India that he was meeting with Australian Finance Minister Matthias Cormann and the $120 billion sovereign wealth Future Fund Chairman Peter Costello, in regard to sourcing investment funding in Indian projects, possibly including Adani’s Carmichael mine.

When asked in Sydney if he would discuss the issue of Adani’s Carmichael coal mine project in Queensland with Australian leaders and investors he replied with “not really”, then elaborated slightly, “This is a subject which is internal to Australia and this is not the purpose of my visit,” he said, reported The Press Trust of India.

So Adani was not the purpose of the Minister’s visit, but it wasn’t a full rejection that the subjection may be discussed either.

Adani CEO Jeyakumar Janakraj also denied the Adani issue was on the agenda of Jaitley’s visit. Janakraj was a part of the CII delegation at the ‘Make in India’ conference launched by the Finance Minister Jaitley in Sydney.

We don’t know if Adani’s problems in developing the Carmichael Coal mine was ever part of Jaitley’s official brief, or even an unofficial brief, and to what extent, if any, it was discussed in any of the Minister’s conversations and many interactions.

The fact of the matter is that India have programs to massively develop their energy sector, both through coal generation and renewables such as solar. Much of their coal generation will come from boosted production in their own coal mines. The prospect of importing coal from Australia is rapidly shrinking. But one also needs to consider the element of nationalism here, and a minister supporting an Indian company.

The Adani Carmichael coal mine and Abbott Point coal terminal have been controversial projects on multiple levels. While the mine has received approval to go ahead from both the conservative Federal Government and Labor state government, current prices for coal make it uneconomic to develop.

We know funding for this extremely risky development is a problem. There are too many risks of it becoming a stranded carbon asset due to climate change action. French banks withdrew interest in April 2015. Adani and the Commonwealth Bank parted ways in August 2015. In September the NAB ruled out funding Adani.

Let alone the environmental and climate arguments ranged against the mine: everything from endangering threatened species, impact on groundwater, impact of dredging for the port and increased ship traffic on the Great Barrier Reef, to the large amount of Greenhouse gas emissions when this coal is burnt ultimately affecting the temperature and acidification of ocean waters impacting reef ecosystems.

Julien Vincent, director of Market Forces, dissects Would Australia’s Future Fund really provide cheap finance to Carmichael coal? while Beyond Zero Emissions founder Stephen Bygrave stated that Australia’s ‘future’ fund should not consider financing the energy projects of the past.

Jaitley’s 4 day Australia visit concluded in Melbourne (April 1) where he did meet with Peter Costello, Chairman of the Future Fund. He also participated in the ‘Invest in India Round Table Conference’ with various Superannuation Funds.

On Friday evening Arun Jaitley was engaged for a ‘town hall’ lecture at the University of Melbourne with Professor Craig Jeffrey, CEO and Director of the Australia India Institute and Greg Sheridan, Foreign Editor of ‘The Australian’ newspaper.

Outside this event Australian Youth Climate Coalition (AYCC) organised a small protest to impress that Australians are not keen on Adani’s Carmichael Coal mine proceeding, and especially not with Australian funds whether via superannuation industry investment or from the Future Fund.

Yes, there were some chants made, some incredibly beautiful poster images of bleached corals waved about, and talking to some of the audience going in to attend the talk and discussion. 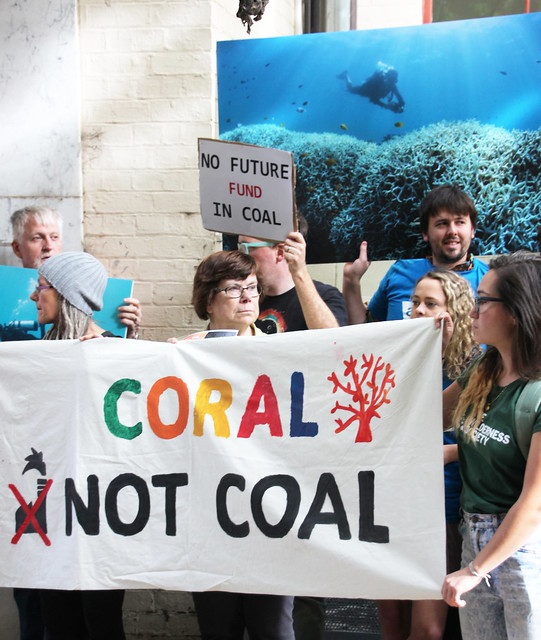 Over several years Australians have expressed opposition to opening the Galilee Basin to coal mining and coal ports on the Great Barrier Reef.

During the past week, while Arun Jaitley has been visiting Australia, we have seen the worst ever bleaching event on the Great Barrier Reef. See the ABC 7.30 Report on the extreme bleaching event caused by climate change.

It is a pretty stark choice: coal or coral, and we have to choose. Adani’s Carmichael mine proceeding would be the death knell for the reef, already suffering from the impacts of global warming caused by fossil fuel emissions.