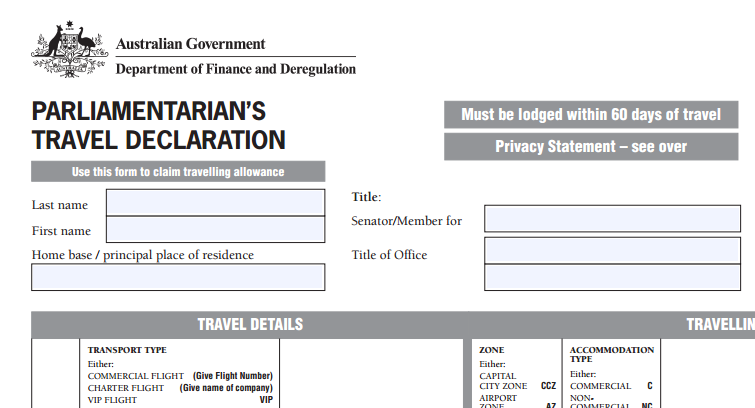 There are several types of parliamentary entitlements involved in the #Battlerort story.

The initial letter to Tony Abbott outlined three of these entitlements.

The first, travel at Government expense, was at the time authorised under clause 2.1 of Remuneration Tribunal Determination 2006/18. At the time Tony Abbott was a Shadow Minister, so he was entitled to the entitlements that a Shadow Minister and normal Member would receive.

Clause 2.1 of the Remuneration Tribunal Determination 2006/18 allowed Senators and Members to access commercial transport such as flights, when travelling anywhere within Australia (excluding the external territories).

This travel was only allowed when travelling on parliamentary, electorate, or official business, and under very limited circumstances of party business.

Parliamentary and electorate business are not defined by the Remuneration Tribunal Determination, but ‘official business’ has a very specific definition according to the Determination.
‘Official’ business was defined as attendance at properly constituted meetings of a Government advisory committee or task force that the Senator or Member was a member of, or to attend a function as a representative of a Minister or the Speaker of the House of Representatives or President of the Senate.

The second entitlement mentioned in the letter is for car transport, including use of Comcars and taxis, and was provided under clause 3.1 of Remuneration Tribunal Determination 2006/18.
This entitlement can be accessed for parliamentary business, but only in four specific circumstances. These are when travelling between their home, electorate office or place of business, and the nearest airport or railway station, when in Canberra or 30 km from Parliament House, when travelling between capital cities and regional centres (except the city where they live or have an electorate office), and when travelling on parliamentary committee business.

The car transport entitlement can also be used for official business, which has the same definition as for commercial transport.

According to the Department of Finance letter, Tony Abbott only claimed a single night of travelling allowance, which was in relation to his portfolio responsibilities, according to Peta Credlin’s letter.

It’s important to note there is a difference between the first two entitlements and the third entitlement.

The Senators and Members Entitlements Handbook outlines the different ways in which a Member is responsible for accountability of their entitlements.

For travelling allowance the money is paid as a reimbursement. That is, the Member has to have stayed overnight and be able to provide proof of having stayed in a commercial accommodation. There is a form that Senators and Members have to fill out to claim this.

A travel service provider is contracted by Ministerial and Parliamentary Services to arrange commercial travel. There is no form to sign or certify. The commercial travel would therefore be paid by the government up front, rather than reimburse the Senator or Member.

The car transport entitlement that Tony Abbott used is paid similarly to the commercial travel entitlement. A page of the Ministerial and Parliamentary Services site explains that Comcar services are charged at an hourly rate, but the charge is met directly by the Department of Finance and Deregulation, ie the Member does not have to pay anything.

The Handbook also says, “With effect from July 2011, the monthly management report no longer included a certification page for completion by Senators and Members.”

This suggests that prior to 2011 Senators and Members had to certify every month that their use of entitlements were within the rules. In other words at the end of August 2009 Tony Abbott would have been required to personally sign a page stating that his use of car transport and commercial transport for that month had been according to the rules.

I lodged FOI today re Abbott's expenses for book promotion, focusing on his ComCar claims for private business. https://t.co/MBCePyEvqR

.@Hippopeteamus, I have lodged FOI to find out who referred Slipper to AFP and how https://t.co/Q5F3P4NQVV @sallie6youtube

EXCLUSIVE: Abbott forced to repay $9,400 he charged taxpayers to promote his book