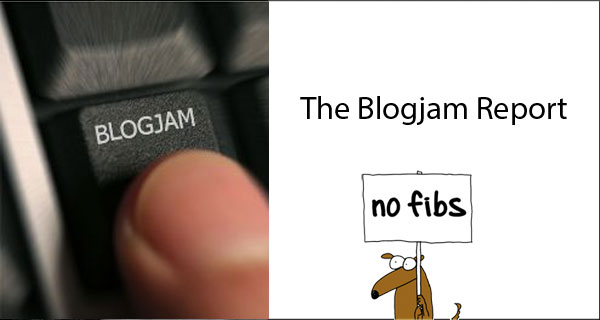 Thanks, Margo, for inviting me to post a Blogjam on No Fibs. I was a reader of Margo’s Webdiary back in the early Noughties, which featured a regular post of links to good reads for the week from the Ozblogosphere.

The landscape has changed – many of the bloggers from that time have moved on, written books, or are now entertaining and educating us via Facebook and Twitter. But blogs are still with us. Here is a selection of posts from the Ozblogosphere for the week 9 June – 16 June.

Inevitably, I’ll have made terrible, head-slapping omissions – so if there’s a fantastic blog post from the last week which I’ve neglected to link to, please drop a link into comments.

Andrew Elder of Politically Homeless on How to make a Blogger laugh in response to a journo’s prescriptive article on how the people they interview should behave.
At The Failed Estate, Mr Denmore writes about ‘news as framing’ and the elusive ideal of objectivity in journalism.

And this is why there is such disenchantment with so much traditional ‘mainstream media’ political and economic reporting. It stems from a refusal or at least a reluctance by the traditional press to at least reflect on the fact that they are part of the apparatus that they report on.

In Media Circus: WTF Labor? edition at Hoyden About Town, Tigtog is watching the apparently suicidal Labor party with a jaded eye while “the heavy panting from the press gallery over the possibility of another Labor leadership spill has been quite repellent.”
Drag0nista asks, in Disagreement: a primer, should a writer’s previous affiliations colour a reader’s assessment of their writing?

Is WA in Recession? asks Matt Cowgill. He’s not wrong that the post is slightly wonkish, so, spoiler alert: “no, but it’s getting too close for comfort.”

At Club Troppo, The Mental health puzzle part IV: The Economic hypothesis, Paul Frijters continues the fourth of a multi-part discussion about ” the puzzle of the measured increase in mental health problems (depression, anxiety, and obesity) across the Western world since the 1950s”. Here he tackles the mainstream “economic explanation”. It’s hard to believe that some economists (or health insurance boffins) think of mental illness as a rational choice, but they’re out there.

Economist Andie at Blue Milk writes on motherhood and gender as a predictor of wage inequality: Again, Motherhood is a feminist issue. (Blue Milk is one of the columnists in the new Oz Guardian now, so look for her there.)

At Club Troppo, Nicholas Gruen writes on Medicalising ADHD. Tigtog at Hoyden about Town notes, appreciatively, Lieutenant-General David Morrison’s now viral speech on unacceptable behaviour in the army. Aamer Rahman (Fear of a Brown Planet, The Truth Hurts) unpacks the racist tropes behind Game of Thrones: “Once again, the Other serves as a convenient prop piece for the journey and development of a white character.”
On the many egregious examples of sexism which have oozed out of the media this week, I’ll cheat, and save my fingers from typing multiple links, by linking to the Oz Femmosphere Gazette maintained by Tigtog.

(Personal opinion alert:) It’s currently fashionable, I think, to deprecate the very real impact of these kinds of attitudes and insults. I disagree, as does Lynn Calcutt at Ausvotes 2013, who maps the connection between the “symbolic” and the “material” in there is a straight road between vilification and violence. If you only have time to click on one of these links, make it this one.

POLITICS, LEADERSHIT AND THE REST

Again over at Hoyden About Town, Orlando writes about Ten Questions I would most like Labor MPs to be asking themselves (in reply to a piece on “ten questions Labor MPs are asking themselves” by Leigh Sales). Unbelievably (or should that be, all too believably?) Sales focuses all of her ten questions on what we the punters have come to describe as “the Leadershit”. Orlando supplies an alternative ten to tease out their thoughts on actual policies – the single parent payments, children in detention, tertiary education funding, mining taxes…

Anna Winter at Larvatus Prodeo counters the negative media reaction to the PM’s comments about Tony Abbott and abortion policy with Abortion is not a plaything and it’s not a wedge.

Abortion continues to be a taboo subject. A dirty, shameful secret that women can’t talk openly about. So when the first female prime minister of the country makes it an explicit topic for debate, surely we can take a moment to acknowledge what a big deal that is.

At the Loon Pond, Dorothy takes us on a typically circuitous but hilarious romp through Brough and That Menu (” in the cause of a light-hearted joke, a jolly jape amongst chums proving nothing but a wonderful, wondrous Queensland sensa huma …Thank the long absent lord. What a tragedy if the rough Brough had been thwarted in his bid to do over another section of Australia…”), Murdochian hack journalists, climate change deniers and their friends in the Coalition: Waiter, some garlic for the spatchcock and tool jokes and don’t forget the tin foil hat…”

Brian Bahnisch revisits the question, “where are all the LNP policies?” in Visceral tribalism: Abbott’s Liberal party.

Under…the ideological nature of the party under its leader, the personal ideologies and characteristics of the individuals and how the whole mix will work under Abbott becomes very important indeed.

Drag0nista discusses what happens when an election is seen as a foregone conclusion in Managing the Protest vote.
John Quiggin points to the sad irony (in the context of the recently reported PRISM surveillance program) of the 2012 US declaration that it is the “consistent and unequivocal policy of the United States to promote a global Internet free from government control.”

Brian Bahnisch at Larvatus Prodeo keeps on keeping us up to date with Climate Clippings 77. 77! Someone give that man an educating-the-public medal.

Andie at Blue Milk farewells Ian Banks and praises The Wasp Factory: “It’s a wonderfully dark story and an absolutely fascinating exploration of misogyny.” Armagny (Marty Pike) writes about his regret that his children may never experience soft and cuddly grandparenting. Genevieve at Mulberry Road recommends Newsblur as a news/blog feed once Google reader has crumbled into nanodust.