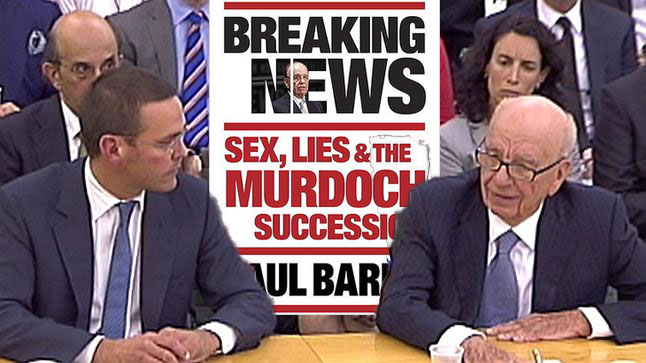 If you want a quick and telling glimpse of the psychopathology that infested Rupert Murdoch’s power house tabloid News of the World (NoTW), turn to the Leveson Inquiry Hearings for Wednesday, 29 November, 2011. On that day, Paul McMullan, ex-NoTW reporter, reluctantly gave testimony about his work practices there – and, in defence of his and his colleagues’ calculated violations of others’ rights to personal space and boundaries, became globally famous for his take on the concept of privacy, proclaiming ‘privacy is for paedos….privacy is evil…..it allows (people) to do bad things.’

Then in response to this, Counsel to the Inquiry, Robert jay QC,  asks ‘could I test that?’ and proceeds to skilfully and deftly draw McMullan out into revealing the amoral trade in human vulnerability he and his ilk dealt in. The gist of the questions that follow is ‘What about Jennifer Elliott?”

In the mid 1990s, Jennifer Elliott, daughter of famous actor Denholm Elliott, was homeless and occasionally used sex work to finance her heroin addiction. McMullan bribed a police officer for information about her whereabouts. He tracked her down, and over the following months, befriended her. He then betrayed their friendship by using it as the basis is for a series of articles in NoTW about her situation, ‘golden girl on the red carpet as her dad goes to pick up a Golden Globe…and here she is with dreadlocks covered in dirt….offering passers-by sex in return for money’.

Think of it. A vulnerable young woman in the thrall of addiction is living on the streets. A corrupt copper tips an opportunistic reporter off as to her whereabouts. She becomes a headline. A few years later, the cumulative effect of everything shitful in her life, including, in McMullan’s words, the fact that his media exposure had ‘absolutely humiliated’ her, takes its toll and she hangs herself. Of all the stories of the hacking scandal victims, that of Jennifer Elliott haunts me the most.

The phrase ‘destroyed lives’ has been repeatedly used in reference to the News Corporation hacking scandal. But it did exactly that. The hacking scandal was lethal.  Alexander Mosley, son of Max Mosley (who testified at the Leveson Inquiry on 24 November), escalated his drug abuse and eventually died of an overdose, unable to bear the shame of having his father reported by NoTW as having Nazi-themed sex with prostitutes (heavily emphasising the fact that Mosley’s father was British fascist leader Oswald Mosley). British High Court Judge Eady found the Nazi theme of the reports had ‘no genuine basis at all’, when Mosley sued NoTW for breach of privacy and said ‘no amount of damage can fully compensate the Claimant for the damage done. He is hardly exaggerating when he says his life is ruined’.

Then there was Charlotte Church, who after years of NoTW reports about her, including her family and her mother’s mental health issues, settled her legal action against News Group newspapers in February 2012, out of concern for what a protracted court battle was going to do to everyone’s health and well-being.

Mosley and Church’s stories get the space they deserve in Paul Barry’s book ‘Breaking News: Sex, Lies and the Murdoch Succession’ (Allen and Unwin).  Journalist Paul Barry is currently host of ABC’s ‘Media Watch’ and has written several books on media-related matters including ‘Rich Kids: How the Murdochs and Packers lost $950 million on One.Tel and ‘Who Wants to be a Millionaire? The James Packer Story’.

But the strength of Barry’s book about Murdoch is it tells the whole story – or should I say, stories; the real human beings at the pointy end of the newspaper sales and headlines, as well as the crunchy legal stuff (a big shout out to his editors.)   The book forensically dismantles the ‘one rogue reporter’ claims, for example.  Then there’s the incredible tale of Jeremy Hunt, who was Culture Secretary at the time of the BskyB tender process in 2010, for which News Corp had launched an £8 billion takeover bid,  and who had what was revealed to be rather creative ideas about overseeing was what meant to be a quasi-judicial process.  And as for David Cameron, you won’t believe a Prime Minister of a G8 member state could be capable of composing such cringe-making texts (to Rebekah Brooks).

And for us random scruffy and obsessed media junkies lurking in the community, fascinated by the Fourth Estate intersection of and interplay between power, money, words and vested interests (including ours), Barry’s book is a fantastic resource.

But primarily, of course, it is the story of one man at the very top of this apex of money, power, influence, and scandal. Covering much of in the 20th century and the early years of the 21st, it is fluent yet comprehensive, with a not-too-much-not-too-little approach to Murdoch’s life and his acquisitions: papers, money, wives, children, Prime Ministers and power. Unbelievable power.  Murdoch was, and is, so powerful that all he had to do was crook his finger and Tony Blair instantly jumped on a jet and flew halfway across the world to attend on him and to beg assurances of his support at the height of the 1995 U.K. General Election campaign.

With the trial of Rebekah Brooks (and  others) ramping up,  the most gripping instalments in this monumental saga may be yet to come. For at the end of the day, newsworthy or not, we are all just untidy, vulnerable human beings, Mr Murdoch. We all bleed when we are cut, and we all have messy edges.  All of us.