By hook or by crook – The #CashForTurnbacks scandal: @Qldaah #auspol 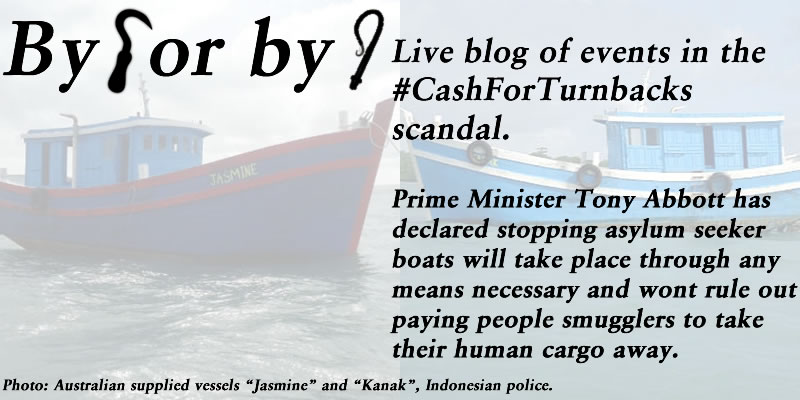 Live blog of the media reports on the “cash for turnbacks” crisis. Check back regularly for updates. 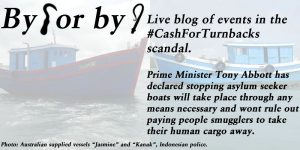 This blog is to collate the media reports surrounding the wrecking of two asylum seekers boats on a reef off Rote Island, Indonesia.

A boat having been engaged by Border Protection was reported on May 2, 2015 by The West Australian. Claims emerged weeks later that the people smuggler crew had been stopped by Australia officials and paid cash to take their human cargo back to Indonesia in two new boats on  May 26, 2015.  The first media reports of the shipwreck began to emerge from June, 1, 2015.

Initially, the Australia Immigration Minister Peter Dutton and Australian Foreign Minister Julie Bishop denied cash was paid. However, the Australian Prime Minister Tony Abbott refused to confirm or deny the event had taken place citing “operational matters”. It was a surprising revelation as up until this point the Abbott Government had refused to comment on operations at sea involving asylum seeker boats. It appeared two ministers had broken that policy.

The New Zealand Prime Minister John Key later confirmed that the original boat’s destination was his country. Reports also surfaced that the boat was in international waters when stopped by Australia.

As per Australian Commonwealth Criminal Code Act 1995, Division 73, people smuggling is illegal and carries a  penalty of gaol or 1,000 penalty units or both. However, proceedings against a perpetrator cannot commence without the Attorney-General’s consent.

‘We’ve done what it takes to stop the boats’

Peter Dutton tells ABC Insiders’ Barry Cassidy that the government has done what it takes to stop the boats.

Alleged payments will not be evidence

I was right! Govt breaches 2014 Lombok agreement with Indonesia by #cashforturnbacks http://t.co/Pmgax8QGmGhttps://t.co/Xop40jc2sG

Tony Abbott claims the boats have stopped while Indonesia claims illicit payments were made to people smugglers by Australia.

Bribery claims all round 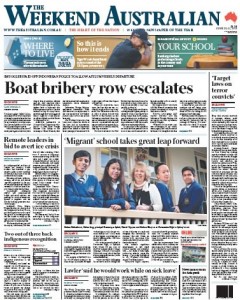 3AW: Scott Morrison knows what happened and that it was legal.

SM: My job was to stop the boats and that's what we did.
Neil: By hook or by crook?
SM: We got it done.#auspol pic.twitter.com/GAoV9BJpVJ

It's about saving lives. pic.twitter.com/ADUTdzuHYL

No cash for turnbacks under Julia Gillard

Julia Gillard on BBC Hardtalk: We didn’t pay smugglers to turn boats away.

How Australia engaged the boat

What happened to the rest of the boat?

Govt has refused to give docs to the Senate regarding payments for people trafficking. Shameful. Will the Senate consider this contempt? 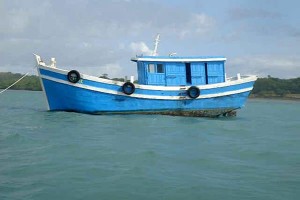 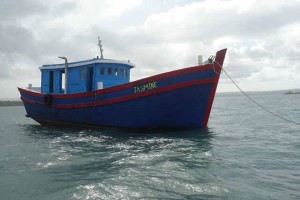 “We have always done things lawfully”: Scott Morrison on cash for turnbacks. 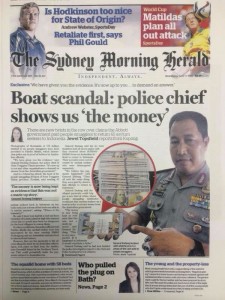 Asylum seekers on board a boat heading for Australia have told the United Nations High Commission for Refugees that they saw Australian authorities give money to the boat’s captain, reports the UNHCR’s Indonesia representative Thomas Vargas.

This is the cash that people smugglers say was used to turn back an asylum boat. #auspol #7News pic.twitter.com/8AgYuhyA4c

Reuters: Asylum seeker says he was on boat paid by Australian authorities to turn back to Indonesia.

Senate has just ordered the Govt to table docs relating to payments made to ppl smugglers. They have 24hours to comply.

The Senate has passed a Greens motion 32-to-26 ordering documents relating to allegations of paying people smugglers: pic.twitter.com/21hzcEcx61

.@Riley7News to @billshortenmp: "…but you can't say money wasn't paid on the land" #auspol #7News http://t.co/TYJFNmuXce

Discussing cash for turnbacks, Terri Butler MP says Australia needs to increase the refugee intake while Senator John Williams says “whatever it takes” is acceptable to stop the boats.

Labor paid people smugglers but not for turnbacks

Who is the mysterious “Agus”?

The hunt is on for the mysterious man named "Agus" who made the #CashForTurnbacks payments. #OnWatergate pic.twitter.com/YLiu2Imx9t

#Auspol are being treated like mushrooms on #Asylumseekers https://t.co/aIBAkYuVG1 pic.twitter.com/oF2sjeDKz1

If the price is right… pic.twitter.com/EpUCgeW29O

What we know so far

It would be illegal: HRC President Gillian Triggs responds to cash for turnbacks

Andreas Harsono from Human Rights Watch on cash for turnbacks.

David Marr on cash for turnbacks: “It happened.”

No straight answers in question time

Did the government pay people smugglers to return to Indonesia? That would be an “operational” and “intelligence” matter says the government.

“The question is academic”: A-G George Brandis on cash for turnbacks.

Defence Minister says not a matter for defence personnel

Defence Minister Kevin Andrews confirms this is not a matter involving defence personnel.

Bring back Philip Ruddock – Cheaper in the long run

By hook or BUY crooks

ABC News: Did the Prime Minister of Australia Tony Abbott have knowledge of ‘cash for turnbacks’.

Exclusive to The Australian – Blame Indonesia 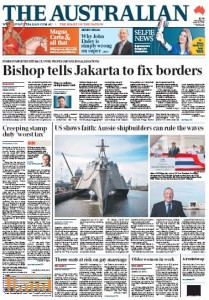 Analysis – What’s it really about?

Tim Lester reported: “Stop the boats” – The issue of whether Australia paid people smugglers to turn around and go back to Indonesia is now affecting diplomatic relations with Jakarta.

Nope, Mr Abbott, you don't have a mandate to break the law or hand wads of cash to pay people smugglers in the middle of the ocean.

Abbott responds with ‘stop the boats’

Abbott continues to refuse to answer

Full ‘by hook or by crook’ interview

Neil Mitchell interviewed Tony Abbott: “We stop the boats by hook or by crook.”

PM Abbott told @3AWNeilMitchell that the Government will stop the boats 'by hook or by crook.' Mitchell sounded gobsmacked.

Tony Abbott “What this government has done is stop the boats.”

Tony Abbott: “We are not in the business of giving information to people smugglers.”

Julian Burnside – Dealing with the devil

The offence of people smuggling

Boat mentioned in The West Australian