Centenary of defeat for the strong-arm premiers – The Qld Weekly #qldpol: @Qldaah 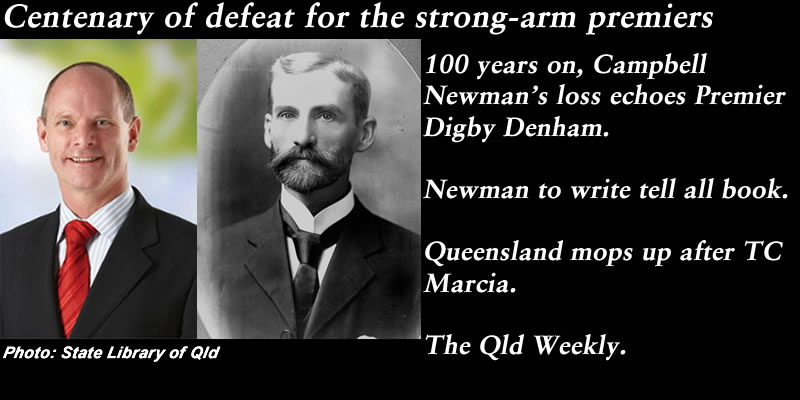 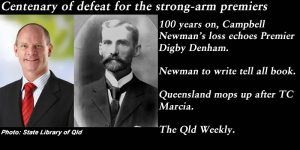 Centenary of defeat for the strong-arms.

A slight change to the format to this column to last year. We’ll be blogging the stories of the day, from Sunday through to Saturday. Check back for updates.

Centenary of defeat for the strong-arms

Campbell Newman has followed in the footsteps of Liberal former Queensland Premier Digby Denham who lost his electorate of Oxley and government in 1915. Both were grain sellers before entering politics and in a quirk of fate, Newman’s seat of Ashgrove covers large sections of Denham’s now defunct seat of Oxley.

In a piece for The Conversation entitled, “History’s lesson for Queensland: a slim majority is enough to be bold”, Postdoctoral Fellow at The University of Queensland Chris Salisbury explores the history of Queensland’s marginal governments through the elections of 1915 and 1998 which gave rise to Labor Premiers TJ Ryan and Peter Beattie, respectively. The later also formed a minority government with independent member for Nicklin, Peter Wellington who has formed government from current Premier Annastacia Palaszczuk.

Denham had become premier of Queensland in 1911 through succession of leadership of the Ministerialist bloc (a pre-cursor to the Liberal Party). As with Newman, law and order was a primary election ticket for the Denham Government. He deployed strong-arm tactics in an attempt to break the 1912 Brisbane tram strike by using police and special constables in a forceful manner. As the strike widened into a general one, Denham feared revolution and called upon the Commonwealth to deploy troops. With the request rejected, he garnered approval from the Queensland Governor William MacGregor to deploy forces from a German warship anchored off the Queensland coast to maintain law and order. With this reassurance, he called an immediate election for 2012. He lost many Brisbane based seats but retained government with a rural base.

Like Newman, Denham picked fights with the unions, even establishing an Industrial Court that did not recognise them. However, his coalition in government began to break down with several government members forming a splinter group called the  Farmers’ Union (a precursor to the Country Party), not unlike the formation of Katter’s Australian Party in 2011 and Palmer United Party in 2013.

Denham also made electoral reform by making voting compulsory for the 1915 election. Newman introduced voting proof of identification ahead of the 2015 poll.

The Ryan Government of 1915 would set-up a progressive platform that would see Labor retain power in Queensland until 1929. Separated by one hundred years, Denham and Newman remain the only two Queensland premiers to lose both their seats and government at a Queensland general state election.

Quentin Bryce hands down report into domestic and family violence

Domestic & family violence is a violation of basic human rights & there is no excuse for not acting to eliminate it. pic.twitter.com/twEyxAocdf

9 News Brisbane: Peter Wellington is Qld Govt’s nomination for Speaker but Lawrence Springborg says there are conditions which he wont reveal publicly.

[email protected] could be the first independent MP to be Speaker since Henry Edward King in 1883 #qldpol pic.twitter.com/IeeoljlfI5

[email protected] says it will be historic & an honour should he become Speaker @tennewsqld #qldpol pic.twitter.com/neT36AJtbN

Independent Nicklin MP @pwellingtonmp has accepted the Premier's offer to be the Government nominee for election as the new Speaker. #qldpol

Lawrence Springborg says he supports Peter Wellington 4 speaker but with conditions.won't say what they are #9News pic.twitter.com/pZ96vkUuza

LNP will support @pwellingtonmp as Speaker but 1st wants to discuss operational issues with @AnnastaciaMP pic.twitter.com/LLZ70fejut

Websites of Premiers past

Verity Barton off the hook

The beer garden at Jambin pub is full with locals to talk to @AnnastaciaMP re flood recovery #qldpol @9NewsBrisbane pic.twitter.com/hFIUz02Xvj

O week at QUT has a couple of surprise guests this morning. @7NewsBrisbane #qldpols pic.twitter.com/cR8kdOToLi

7 News Brisbane: Brisbane bid for the 2028 Olympic Games could cost up to $30 million.

Loved backbenching this @couriermail page. Be nice to the little people on the way up… #qldpol #schadenfreude pic.twitter.com/P0TK1d6Kzm

7 News Brisbane: Queensland war widows and women in the military have joined forces to tackle a debilitating disorder ahead of the Anzac Centenary.

Civil unions to be reintroduced

7 News Brisbane: Gold Coast crippled by cocaine crisis – In the wake of the cocaine scandal rocking the Gold Coast Titans, police have given a rare insight into their ongoing battle to halt the supply and use of the drug.

7 News Brisbane: Residents who lost their homes during Cyclone Marcia have been reduced to tears while telling the premier about their struggle to get to safety.

I've been with @AnnastaciaMP meeting with Byfield locals hit hard by #TCMarcia. They're resilient & have many stories pic.twitter.com/GiPkJMyYpg

7 News Brisbane: Emergency spraying for mosquitoes – An outbreak of Ross River Fever in the state’s South East could get worse with last week’s rain and tides creating perfect breeding conditions.

Special thanks to the Chinese community for warmly welcoming the new @QLDLabor Cabinet ahead of their first meeting. pic.twitter.com/ZGcY52MPK0

Premier in Biloela saying thank-you to @QldFES and @QldSES crews for all their hard work in recent days. #qldpol pic.twitter.com/3IK1qHvSMm

Gympie clean-up effort in full swing. They know exactly what to do after so much practice! @7NewsBrisbane #extcmarcia pic.twitter.com/XvMpNmKhJJ

ABC News Qld: After your 5th evacuation from Gympie why stay?

Hopefully there's a pot of gold at the end for the people of flooded Gympie… @7NewsBrisbane #extcmarcia pic.twitter.com/ZIMChYK3Ho