Centenary of the Qld progressives – The #QldWeekly Blogazine: @Qldaah #qldpol Follow the week in Queensland politics and news at NoFibs blogazine. 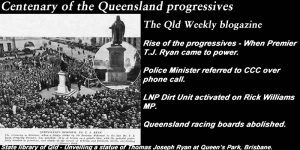 Centenary of the Queensland progressives. 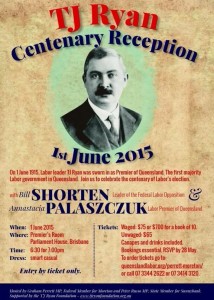 Centenary of the Queensland progressives

One hundred years has elapsed since the swearing in of Thomas Joseph Ryan as Queensland Premier, Chief Secretary, and Attorney-General. Born in Victoria in 1876, T.J. Ryan became a teacher and barrister. Much of his work revolved around workers compensation cases which brought him in contact with many union and shearer clients. This triggered his political interest and he joined the Labor Party in 1904. Simplicity in law was his goal for clients; “words should be used that would not only be understood, but which could not be misunderstood”.

He saw the “natural allies” of the Labor Party as the community’s most disadvantaged and sought public policy to overcome the entrenched interests of capitalism and its exploitation of the population by the wealthy. Under the Ryan Government the Labor Party found its feet in Australia. There had been a previous Queensland Labor government but not with a majority to rule in its own right. The state and country were run by a loose arrangement of parties, sometimes groups of conservatives granting support to Labor and vice versa.

However, under Ryan, Queensland and Australia start to see emerge the real progressive movement. The spark ignites those big  Labor social and workplace reforms. Occupational health and safety, Workcover and safe work practices are all policies that can be traced back to Ryan initiatives. He also ensured that women were allowed to become MPs. A multitude of platforms sets up Labor to govern Queensland from 1915 to 1929. 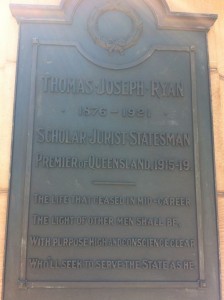 Plaque on the statue dedicated to Premier TJ Ryan.

Ryan was also the national voice challenging the World War I conscription policy of Labor Prime Minster Billy Hughes (later National Labor Party and yet later Nationalist Party). Bitter verbal battles between the two ensued over 1916-17. Hughes even went so far as to trial Ryan on a conspiracy charge. Ryan simply met this with contempt of parliament charges. Ryan was frequently accused by his enemies as “a stooge of the Industrial Workers of the World, a tool of Sinn Fein, a friend of Germany (and later of the Bolsheviks).”

By 1919, Ryan had resigned his premiership and set his sights on federal leadership. However, a bout of Spanish flu contracted in the same year finally caught up with him in 1921 on the campaign trail. Dead at 45, some reports say he literally worked himself to death, not allowing himself time to recover from his illness, giving too much of himself to public life. His body was carried past crowds from his place of death in Barcaldine to Brisbane for burial in Toowong cemetery.

A three metre bronze statue of Ryan was unveiled in 1925 and stands in Queen’s Park in Brisbane city. The federal seat of Ryan in Queensland is named after him. The Ryan medal is awarded to the highest pass in the state’s scholarship examination.

Ryan’s reformation touches Queensland today. The TJ Ryan Foundation was established as a progressive think tank to research public policy and includes board members such as Professor  John Quiggin and Emeritus Professor Tom Cochrane. In the lead up to the centenary, Cochrane wrote a paper exploring Ryan’s dramatic push for change and his difficulties with the now defunct Queensland Legislative Council: T.J. Ryan – A Centenary Note.

Wonderful to address the @TJRyanFdn on the 100th anniversary of the election of the Ryan Labor Govt. #qldpol pic.twitter.com/502VyPodhI

Carmody and the seat of Ferny Grove

October 13, 2011, Daniel Hurst reported, “A Liberal National Party dirt sheet detailing a minister’s epilepsy and childhood adoption reflect the attitudes of the 1950s and have no place in political campaigns, Premier Anna Bligh says. The government today stepped up its calls for the LNP to sack the party officials who commissioned research on Labor MPs by former ALP staffer Robert Hough, whose work reportedly included claims about some politicians’ sexuality, sex lives, drinking habits and health matters.”: LNP’s dirty deed docs ‘belong in the 1950s’.

October 23, 2011, Francis Tapim reported, “A former Federal Liberal MP has revealed more damaging allegations about the internal running of the Liberal National Party (LNP). Former Member for Ryan Michael Johnson says recent reports about dirt files, secret recordings and intimidation within the party are the tip of the iceberg.”: LNP dirt files the ‘tip of the iceberg’. 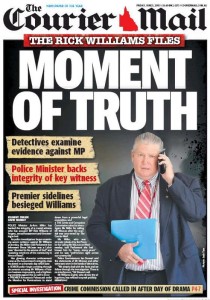 Geoff Breusch reported: Police have confirmed to 7News that their investigation into Bribie MP Rick Williams is getting bigger.

Police Commissioner has referred Police Minister to CCC over her phone call to witness at centre of MP investigation. pic.twitter.com/q6f1PjI58r

In for a penny … @JarrodBleijieMP tips by-election #9News #qldpol pic.twitter.com/FZcHompvCx

'If @AnnastaciaMP applied the same test to Williams and @JoAnnMillerMP as she did to Billy Gordon they'd be sacked' pic.twitter.com/sEKi0JeyGs

I'm assuming that this is Campbell's Tower of Power #qldpol? pic.twitter.com/hwtye5eAZi 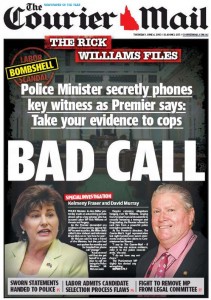 Geoff Breusch reported: Queensland’s police minister will be investigated by the service she oversees, after a dramatic escalation involving a Labor MP.

Rick Williams Day 2: @AnnastaciaMP has stood him aside from a Parlt Legal Committee. @abcnews #qldpol

They took my freedom of speech

On June 1, medicinal cannabis was rescheduled by the TGA from a schedule 9 poison to a schedule 4 medicine for therapeutic use only #qldpol

#qldpol @AnnastaciaMP on the Abbott Govt over lack of supply for infrastructure. Bound to be a Fed election issue. pic.twitter.com/vzlEPdEfTd

Language of the misogynists

The day in Queensland Parliament

Allegations made against Rick Williams handed to police commissioner

Trial by media of another Labor MP 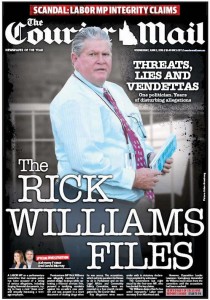 Geoff Breusch reported: Annastacia Palaszczuk’s tenuous grip on power is again under threat, with a second member of her Government at the centre of a fresh scandal.

Kendall Gilding reports: Surfers Paradise is preparing for 10 years of increased investment and a jump in tourism.

Queensland out of technical recession

Vulnerable status across the state