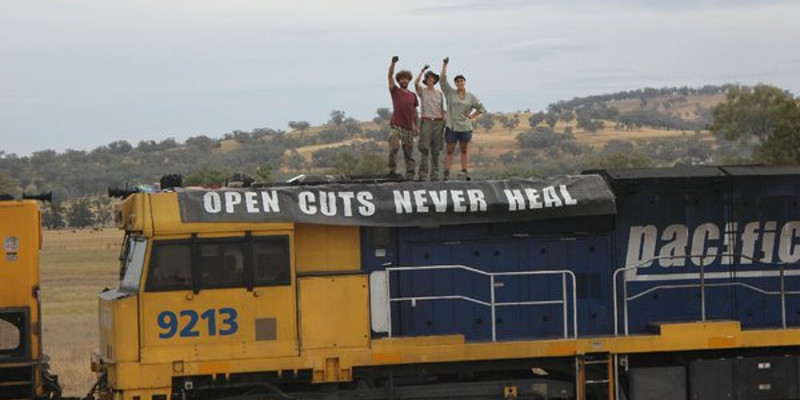 The Leardblockade continues with more coal trains being stopped from transporting coal from Whitehaven and Idemitsu mines to Newcastle port for export in an act of peaceful civil disobedience.

Front Line Action on Coal spokesperson, Jason McLean, said of the action that “civil disobedience would not stop until the Government puts the well-­being of its citizens ahead of that of big business.”

The media statement outlines that “Coal production continues to expand in NSW, despite global acknowledgement that fossil fuel consumption is drastically changing the world’s atmosphere and is sending greenhouse gas emissions to levels not seen before in human existence. In addition, the broadscale clearing of carbon-dense forest by Whitehaven Coal at the Maules Creek mine is driving landscape-scale loss of biodiversity and huge losses of natural carbon stores.”

The protesters boarded the train late afternoon, just before 6pm. Police arrived, but no action was immediately been taken to remove the three protesters. At 9:14pm they were still atop the engine enjoying the starry skies. Around midnight the 3 protesters were taken into custody. They were released Wednesday morning.

“We call upon the NSW State Government to help communities transition to sustainable industries, as the mining boom ends and the world moves towards ensuring a safe climate future. Mike Baird’s condemnation will not stop us from standing against dodgy companies like Whitehaven. We will stand up to them from the Pit to the Port.” said spokesperson Jason Mclean.

The protesters explain why they took their action in their own words:

The action was part of continuing civil disobedience against coal mining from the Whitehaven and Idemitsu coal mines. Last Friday – Easter Friday – student Chelsea Lazar blockaded a train bound for Newcastle coal port, delaying it for a number of hours.

Action is ongoing at the #Leardblockade to stop Whitehaven’s Maules Creek coal mine destroying the ecologically sensitive Leard Forest.

Activists are also gearing up for a global wave of resistance to Breakfree from Fossil Fuels from May 4th to 15th to keep coal, oil and gas in the ground and accelerate the just transition to 100{17ac88c265afb328fa89088ab635a2a63864fdefdd7caa0964376053e8ea14b3} renewable energy. In Australia action will focus on closing down operations of coal export from Newcastle on the weekend of 7-8 May 2016.

Around the world communities are campaigning for climate justice to shut down new fossil fuel developments. On Wednesday 23 March Hundreds of climate change protesters disrupted a US Bureau of Ocean Energy Management (BOEM) auction of offshore oil leases in the Gulf of Mexico. What was once a supportive community for the oil industry is now demanding they stop new oil projects and invest in cleaning up the coastal degradation and damage they have caused and continue to inflict on coastal communities.

A Deep Sea Development oil and gas industry conference is about to be held 5-7 April in Pau, France organised by the Total oil multinational with all the oil industry major corporations expected to attend. A French coalition of community and climate activists are organising to close down this conference citing that development of all new deep sea fossil fuels works in opposition to the Paris Agreement on climate change signed in December 2015 and amounts to ‘climaticide’.