Dear elected representatives, give the public a seat at the media reform table 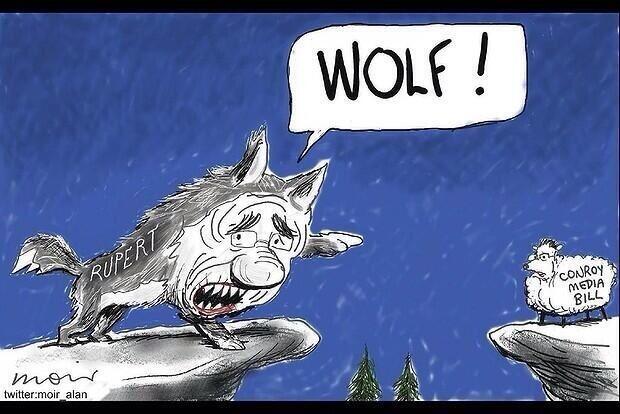 Hi.Have you seen this excellent & thorough explanation of exactly what the reforms are and how they will affect the media? Explainer: Conroy’s proposed new media laws is by Martin Hirst, Associate Professor Journalism and Media at Deakin UniversityDear .

I appreciate that you are most likely receiving an awful lot of correspondence in regard to this proposed legislation.  I also understand that not a lot of time has been allowed for it.  Please, seriously consider negotiating to allow the legislation to go through as it is in the best interests of the PUBLIC, us Australian Voters.

It is not perfect, obviously, and in my opinion does not go far enough. As someone who has tried to make complaints to the Press Council, I can assure you, that as a member of the public they are impossible to deal with and we are not treated with respect and are given the run around in regard to the basis of the complaint.  Yet it seems that other media companies and politicians can get satisfaction from the Press Council?  They are not supposed to be just an umpire for internal media spats, they should also be listening to the public, and they are not.  In fact, it is easier to deal with a Telco than the Press Council if you are a member of the Public, so what does that tell you?

We have independent umpires in many facets of business – Ombudsmen, ACMA and the RBA – and none of those industries have fallen over.  The television stations have not fallen over.

The hysterical nature of the News Ltd papers in the past few days are the strongest indicator that you need to vote for this legislation.

I would also suggest you review the Senate Enquiry held yesterday afternoon.  Mr Williams of News Ltd did not answer any question that had anything to do with the public at all. it was all about his business and his nose out of joint as he was not consulted. Nor should he have been, Government should not be going hat in hand to big business for legislation changes. MPs and Senators work for us, the public, and as far as we are concerned Mr Williams is only ONE voter.

I also ask that you be very aware of the opposition’s claim with regard to diversity in media and their claim that ‘the internet’ gives diversity.  This is very very cute, as any IT expert will tell you that the number of people getting their news from the internet is negligible as yet. Saying that TV has diversity in news is also dodgy. Every morning news show will repeat more than once, ‘What is on the front page of the newspapers’, the message from print press is spread further.

These two companies, Fairfax and News Ltd, have the power to bring down Governments and change public policy with campaigns to favour their own business interests.  They need to be reined in.  We need more diversity in this country (it is a joke if you look overseas) and we need the Press Council to do its job and we need an Independent adjudicator above them to make them do it!

Please, seriously, in this debate played out in the media there has been little attention paid to the actual PUBLIC!

If you care about you’re electorate and the voters in this country, support Media Reform.

NOTE: If you would like to do similar to me and contact people you think would support this reform please read the list of MPs and Senators to contact here. I also suggest you contact your own Federal MP to give him or her feedback as well :)

Here are other article on this issue from NON News Ltd media, as no balanced articles at all can be found in this all-encompassing media group. If someone does happen to come across a News Ltd article that is not abusive towards reform or is balanced about this issue please feel free to let me know and I will add to the list:

The men of TV and a media regulation stitch-up
The media must embrace reform to survive
The day News Ltd supported newspaper regulation
Free Media VS Free Market
Poor planning has doomed Labor’s media reform
Just so you know, the government’s media reform case in Parliament today
Has Chairman Rupert entirely lost his marbles?
News Corporation has no-one to blame but itself
Australian media shoots ‘Own’ Goal on Media Reform
Bad chemistry in media battle
@albericie debates @chriskkenny on media self regulation reform: And the winner is?
A diversity of views
Murdoch fears another Murdoch
Uncivil and unbalanced: the Australian media can’t be trusted to report on industry reform
The worst government ever? Not yet
Six-step approach for genuine media regs reform
will add more as I find them…

Vote in the Media Reform Pub Poll. Click on image below. 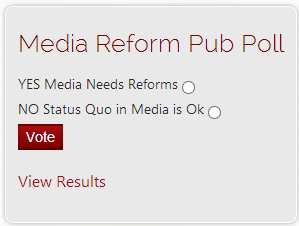