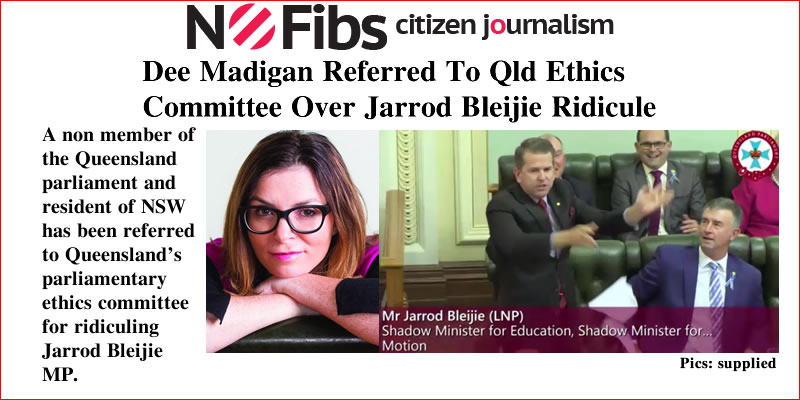 NSW resident and non member of the Queensland parliament, Dee Madigan, has been referred to the state’s ethics committee for ridiculing Jarrod Bleijie MP. 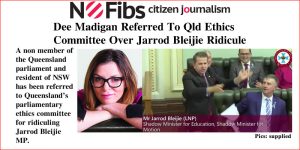 Author and Gruen panelist, Dee Madigan, has been referred to Queensland’s parliamentary ethics committee for ridiculing in a Tweet the Liberal National Party (LNP) member for the state seat of Kawana, Jarrod Bleijie. Last month, this blogger made a Graphics Interchange Format (GIF) of a scene in the Queensland Parliament in which Mr Bleijie tore up papers and threw them on the floor during debate on changes to the state’s vegetative management act.

Mr Bleijie had been unhappy that the hours of parliament had been extended to close out the bill and pointed to the government’s recent introduction of ‘family friendly hours’. Egged on by the deputy leader of the opposition, Tim Mander, Mr Bleijie digressed into accusations of socialism against the Labor Party before tearing up papers and casting them down. The action drew condemnation from Speaker Curtis Pitt.

Ms Madigan quote commented on the Tweet adding, “Your taxes at work. A toddler tantrum for @JarrodBleijieMP”.

Your taxes at work. A toddler tantrum for @JarrodBleijieMP https://t.co/bSjhGRCyIz

Upon receiving a complaint, the Clerk of the Queensland Parliament Neil Laurie contacted Ms Madigan asking her to delete her comment. He labeled her, “a contracted campaigner of the Labor Party, Queensland Division”. Mr Laurie went on to cite, in its entirety, section 50 of the Parliament of Queensland Act 2001, including that, footage of proceedings in the Queensland parliament should not be subject to such things as ridicule, satire or political advertising. In his view, her Tweet had breached, “the terms and conditions and is a prima facie contempt”.

Compare the pair. One is my tweet and one is from @jarrodbleijiemp the man whose complaint had me referred to the Ethics committee for using parliamentary footage with commentary in a tweet. (Only one of the tweets contains direct parli footage hint: it’s not mine) pic.twitter.com/JzLxVxEwMt

Ms Madigan pointed out that she was not contracted to the Labor Party in either Queensland or elsewhere, that she was a private citizen, entitled to retweet people and would not be removing the Tweet. She also pointed out that multiple members of the LNP had used parliamentary footage over time to express political opinions and to ridicule.

And here is @DebFrecklington retweeting parliamentary footage. The LNP are a bunch of hypocrites. pic.twitter.com/Q96ZZ6GhlD

Mr Laurie pointed to the Speaker’s recent ruling in which two separate complaints had been received, both relating to members of parliament involving satire and political advertising. Further, Mr Bleijie had complained about an image that was taken from parliamentary footage and subsequently tweeted by a ministerial staff member. Leader of the House, Yvette D’Ath, had also complained about footage appearing on the LNP’s website. Both instances had been removed and as such no referral to the ethics committee had been made. The Speaker ended the ruling by noting that members should pass on the information to staff and political parties. 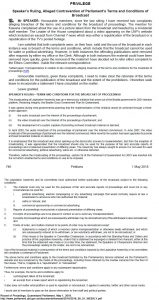 Every day this week Qld politicians have live streamed parliament footage which has been shared and commented on. Hope they have a big jail cell because they’ll be lots of us in it! :) https://t.co/QhkR5oeoSf

In his ruling today, Speaker Pitt said that his, “role is not to determine whether there has been proven fault—a breach of privilege—but rather whether there are sufficient issues in play to warrant the further consideration of the House via the Ethics Committee.”

Upon hearing of the referral, Ms Madigan said it brought into question the issue of free speech over social media. She also said her original Tweet would be staying in place.

If this is upheld it means no one on socmed can retweet or share with a comment any parli footage, even if it has been on the news or streamed live or shared by pollies. The precedent on free speech is extraordinary. It is bullshit. https://t.co/nNnnBiWqKt

Ms Madigan also suggested that the attack was politically motivated given her involvement in Labor’s successful 2015 Queensland election campaign which led to Mr Bleijie leaving office as the state’s Attorney-General.

Of course not, just me who @JarrodBleijieMP knows helped get his govt kicked out
of office. But I’m sure that’s just a coincidence…

Brisbane Times journalist Felicity Caldwell said she had contacted Mr Bleijie for comment. However, the Speaker had earlier reminded members of parliament that, “standing order 271 now applies and members should not refer to these matters in the House.”

This is the tweet that an elected Member of Parliament wants a member of the Australian public to be banned from sending: https://t.co/hsrt5YhmL9

Does this mean @theipa will now launch one of its campaigns in support of @deemadigan's free speech?

And we get dozens and dozens of opinion pieces supporting @deemadigan in @australian?

In his report, the ABC’s Josh Bavas apologised for not being able to list the original Tweet and said, “to avoid breaching those same rules, the ABC cannot republish the tweet — sorry about that.” Tweet about LNP MP’s ‘toddler tantrum’ gets ad exec referred to ethics committee.

Ms Madigan remains at large in Victoria. A “Free Dee Madigan” concert is believed to be underway.