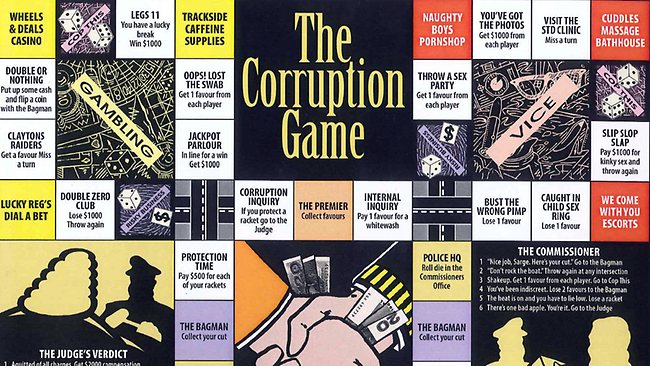 Part of the Corruption board game, which appeared in The Cane Toad Times. Source: Supplied

Margo: Tony has kindly given me permission to publish a piece he wrote for the Oz late last year.

There are about 800 politicians in Australia’s parliaments. According to their assessments of each other, that quite small group includes role models for lying, cheating, deceiving, ‘rorting’, bullying, rumour-mongering, back-stabbing, slander, ‘leaking’, ‘dog-whistling’, nepotism and corruption.

A recent editorial valiantly suggested that ‘toxic debates test ideas, policy and character’, but a more orthodox view is that ethics, tolerance and civility are intrinsic elements of democratic society and that the politicians’ mutual contempt and aggressive, ‘end justifies the means’ amorality erodes respect for authority and public institutions and compromises social cohesion.

Even some insiders are worried by the standard of Australian public life: a former Minister, Senator John Faulkner, has said that this is ‘a dangerous moment for our democracy’, which ‘is drowning in distrust’.

However, insiders see problems with insiders’ eyes, recognise only some of the problems and few of the causes and suggest insiders’ solutions with voters as mere bystanders. The usual, and sometimes intended, outcome is a flurry of superficial activity, appointment of a suitable group of other insiders to report, lengthy discussion of their report, considerable navel-gazing, a feel-good pronouncement and business as usual.

Realistically, since politicians are unlikely to support any significant change which might reduce their power, genuine reform will be extremely difficult. However, it is not impossible if it is owned and driven by the community.

One modest, uncontroversial proposal which I favour as a starting point is a free, non-partisan website to provide voters with clear, accurate, impartial information to assist them to compare candidates for election, make better informed choices and avoid voting for unsuitable candidates merely because they have party preselection. As the United States Supreme Court observed about twenty years ago, ‘the ability of the citizenry to make informed choices among candidates for office is essential, for the identities of those who are elected will inevitably shape the course that we follow as a nation’.

‘Informed choices among candidates for office’ are especially important in Australia. The Constitution omits important checks and balances which commonly restrain the misuse of power. Australia’s version of democracy is founded on concepts of representative government and parliamentary supremacy which are in turn based on a premise that majority decisions by elected representatives constitute the collective wisdom of the community.

Those elected are not chosen to exemplify society’s flaws and vices but to act with integrity, make decisions for the public benefit and, as it was put by the late Professor Julius Stone, exercise power ‘subject to the restraints of shared socio-ethical conventions’. The cynicism and debased standards of modern party politics totally disregard those principles.

Political parties are effectively unregulated private organisations. The major parties, a coalition representing business and rural interests and an alliance between trade unions and socialist groups, include principled, well-motivated people but also attract professional politicians with little or no general life experience and unscrupulous opportunists, unburdened by ethics, who obsessively pursue power, money or both.

Little-known and often unimpressive factional leaders exert disproportionate influence. Under their guidance, the major parties have consolidated their grip on political finance, the political process and political power. As a result of their own parliamentary decisions, parties are publicly funded without a binding reciprocal obligation to act in the public interest. The power of these few, surprisingly small, unregulated groups is for now impregnable. For the foreseeable future, they will dominate public discussion and debate, effectively control Australia’s democracy and determine its destiny.

That might be tolerable if the major parties acted with integrity – but they do not. Their constant battles for power are venal, vicious and vulgar.

The mantra ‘whatever it takes’ is part of political folk-lore. Parties equate their interest to the national interest, which they assume is best served by their ideology and its benefits for the like-minded. Populism, paranoia and unrealistic expectations are encouraged and the naive and gullible are made envious, resentful and disdainful of fellow Australians.

Financial backers are provided with special access and influence and and supporters are appointed to public positions.

Information is withheld, distorted and manipulated and falsehoods and propaganda are euphemistically misdescribed as mere ‘spin’.

Opposition, dissent and criticism are discouraged by personal abuse, often protected by parliamentary privilege, and unwelcome ideas are condemned as ‘elitist’ or ‘un-Australian’.

The public interest is routinely subordinated to the pursuit of power, party objectives and personal ambitions, sometimes including the corrupt acquisition of financial benefit.

The role, authority and prestige of Parliament, the corner-stone of our democracy, are diminished as decisions made by the party leadership are publicly rubber-stamped by parliamentarians whose party membership and pre-selection are held at the whim of the party and who are bound by party rules and discipline to implement its policies and vote as directed irrespective of their consciences, opinions or responsibilities to their electorates.

Citizens are free to criticise and periodically entitled, indeed compelled, to vote. However, since one or other of the major parties will always win, elections provide voters with only a type of Hobson’s choice. Many people vote only because they’re legally obliged to. Because voters often know little or nothing about candidates except which party each represents, the parties gift electorates to family connections, malleable party hacks and mediocre apparatchiks. The huge gulf between governance principles and political practice can be directly traced to the calibre of those whom parties select to represent them. Unless and until that improves, the current national embarrassment will continue.

Once that occurs, political parties will feel pressure to pre-select on merit, more people of integrity will be encouraged to join political parties or stand for election, the quality of those elected to parliament will improve, political standards will rise and other reform will become possible.

It will take time and patience, but ultimately, if the community perseveres, it will prevail.

To perform our democratic function we need and are entitled to the truth: Tony Fitzgerald