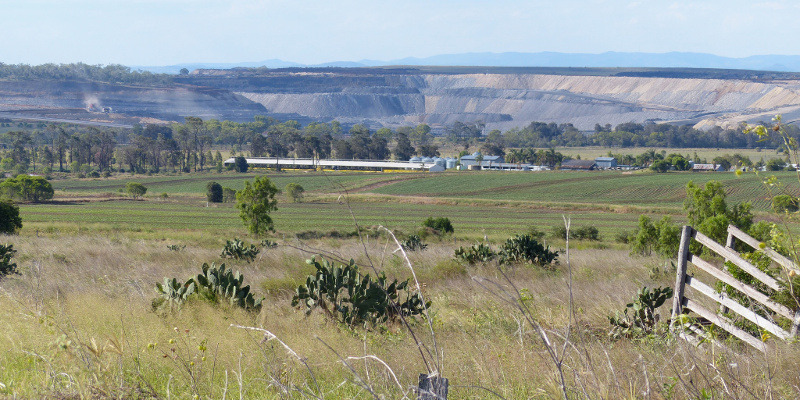 The Queensland Land Court has ruled against the New Hope application to expand its existing open-cut New Acland Coal mine (Stage 3) in Queensland’s Darling Downs which was proposed to operate for an additional 12 years to 2029.

While it is a historic landmark ruling and recommendation, the mine extension will depend upon two further decisions, which need to take the court’s 459 page judgement carefully into account.

The first decision is by the Queensland Department of Environment and Heritage Protection with a final decision on the environmental authority amendment application. The second is by Mines Minister Lynham deciding the mining lease application. Both decisions must take into account the Court’s recommendation as part of their respective decisions.

The New Hope company would also require an associated water licence under the Water Act 2000 for the expansion to proceed.

The Federal Minister for Environment Josh Frydenberg signed off federal environmental approval under the EPBC Act for the expansion on 18 January 2017, with an 82 page Statement of Reasons (PDF).

This was an historic landmark case for the Land Court. The court come out very strongly in rejecting the environmental authority approval of the mine extension. EDO Qld advised that the case began on 7 March 2016 and ran until 5 October 2016. It was re-opened at New Hope’s request in April 2017 for the submission of further groundwater evidence. The Land Court case involved 40 individual objectors; 27 expert witnesses; 38 lay witnesses; 14 active parties; 96 hearing days; two site inspections; 1,951 exhibits; and 8,151 pages of court transcripts – making it one of the largest environmental public interest cases in Australian history.

The mines impact on inter-generational equity and groundwater was particularly important.

Land Court member Paul Smith highlighted the mine expansion could adversely affect groundwater for hundreds of years to come. He argued this breach of “inter-generational equity” was reason enough to refuse the proposal.

“[14] The principles of intergenerational equity are breached in at least one regard by the proposed revised Stage 3, with the potential for groundwater impacts to adversely affect landholders in the vicinity of the mine for hundreds of years to come. This breach is sufficient to warrant rejection of the MLAs and draft EA applications.”

“[16] As regarding groundwater, a huge amount of evidence was before the Court. In key areas NAC’s own experts agreed with major shortcomings of the current model. I was also highly concerned regarding the modelling of faulting and other aspects of the groundwater studies undertaken to date. These issues have not been answered by the 2016 IESC Advice for reasons including the unfortunate fact that the IESC did not have the advantage of the material before the Court on groundwater. Groundwater considerations are such that the revised Stage 3 project should not proceed given the risks to the surrounding landholders and the poor state of the current model.”

Mr Smith said he did not believe the expansion would have impacted climate change as coal from other parts of the world would be burnt in its place. Here is Smith’s summary point:

“[9] The climate change evidence in this matter is identical to that in the Hancock case. Accordingly, there are no concerns regarding climate change caused by revised Stage 3. The evidence shows that if revised Stage 3 does not proceed the coal will be obtained from elsewhere and that such coal will most likely be of a lower quality thereby increasing global emissions.”

This ruling is what is known as the Drug Dealers Defence: the notion of ‘substitution’ would see an offender exonerated on the basis of the argument that ‘if I didn’t do it, someone else would’”. New Matilda talks about this legal argument in this 2016 article on the Hancock decision. Our legal system needs to move away from judgements based upon this defence, which effectively lets companies knowingly causing pollution and climate impacts down the track that kills and injures people, to be let off with no responsibility.

The ruling argues that substitution is likely to occurr, but what isn’t mentioned at all is the state of the global coal market currently in structural decline, with many of our trading partners such as China, India, Taiwan and Korea reducing coal imports as renewables are ramped up. New Acland coal might never be missed in this scenario, and in fact it might be an economic benefit the mine not proceeding to holding up coal prices for other existing coal producers.

EDO Queensland said that disturbing evidence emerged during the case including:

* Noise and dust risks and complaints: Evidence showed there was a high risk of the project exceeding air quality limits unless so-far unproven controls were in place. The Court heard the community’s complaints about coal dust and noise levels and requests for data have fallen effectively on deaf ears for the past decade, including more than 100 complaints to New Hope and 30 to the state environment department.

* Over-inflated job figures: The project’s original environmental impact statement stated the project would produce an average of 2,953 jobs per annum, yet in court this figure was reduced to 680 net jobs nationally. (Doesn’t that remind you of Adani’s inflated jobs claims?)

*Limited royalties to QLD government: In Court it was revealed an estimated $500M in royalties from the expansion would flow to the coal company and a small number of property owners, instead of to the Queensland Government which would receive just 7{17ac88c265afb328fa89088ab635a2a63864fdefdd7caa0964376053e8ea14b3} of this, severely limiting financial benefits from royalties to taxpayers.

Paul King from Oakey Coal Action Alliance, a group of more than 60 farmers and objector in the case, said in a statement:

“This is an incredibly important outcome for farmers and communities on the Darling Downs and it vindicates our long struggle to protect our district from this risky coal mining expansion. By recommending against the Acland Stage 3 mine the Land Court has recognised that the impact on our water supplies, our farm businesses and the health of our families are too severe,” he said.

The mine expansion was initially rejected by the Newman LNP government in 2012 who stated that ‘it was inappropriate to expand the mine in the State’s southern food bowl’, but this was later changed to supporting the mine expansion. Queensland Labor had also made an election commitment for an independent review of the impacts of the revised Stage 3 proposal on the local community. After 10 years of campaigning, Mr King called on the Queensland Government to honour its commitment and reject the Acland Stage 3 development.

“We won’t rest until the Queensland Government rejects this mine and puts in place long-term protections for our agriculturally rich region.”

“Today’s win highlights the significance of the courts and community objection rights in holding government and projects accountable under the law and what can be achieved by hardworking members of the community who band together against all odds to challenge deep-pocketed mining companies.

“Without this case, the costs and benefits of this project would not have been scrutinised before the independent Land Court and evidence including faulty groundwater modelling, increased noise and dust risks and complaints, and over-inflated job figures, would not have been exposed.

“All eyes now turn to the Mines Minister Lynham as well as the Department of Environment and Minister Miles as to whether they will respect the decision of this independent Court, which has thoroughly reviewed the evidence and considered submissions from all sides,” Ms Bragg said.

Shares in New Hope Corporation dropped like a stone. Trading in the shares has been suspended.

New Acland Coal (NAC) open cut coal mine is owned and managed by New Acland Coal Pty Ltd, a New Hope Group company. It is located about 10km north-northwest of Oakey in southeast Queensland’s Darling Downs region right on the town of Acland. It is productive cropping land.

New Hope Coal is an Australian coal mining and energy company, majority owned by Washington H.Soul Pattinson and Company Limited (an investment company founded by Lewy Pattinson). The company tried to sell the mine in 2012 but failed to find a buyer.

The Stage 3 expansion is an estimated $800 million project to expand the existing NAC with three new open cut coal mines that would increase annual production of coal from 5.2 to 7.5 million tonnes for a period of 12 years to 2029.

The problem for New Hope is the mine extension occupies prime agriculturally productive cropping land and would result in groundwater dropping by up to 50 metres in some locations and may affect more than 350 water bores.

The Australia Institute released a report in June 2016 detailing the murky connections between fossil fuel mining companies, political donations and the mine approvals process. (‘Greasing the Wheels – The systemic weaknesses that allow undue influence by mining companies on government: a QLD case study’ PDF)

New Hope and it’s parent company Washington H Soul Pattinson and an associated company called Brickworks, from 2010 to 2014 donated to the Liberal Party of Australia or Liberal National Party of Queensland some $1.3 million. During 2013/14 New Hope executives had at least 7 formal meetings with Newman Government ministers.

After this comprehensive independent judicial review by the Land Court, will the Palaszczuk government heed the community objections and refuse the mine approval?

Read the social media storify this article is based upon: Qld Land Court Ruling against New Acland coal mine extension