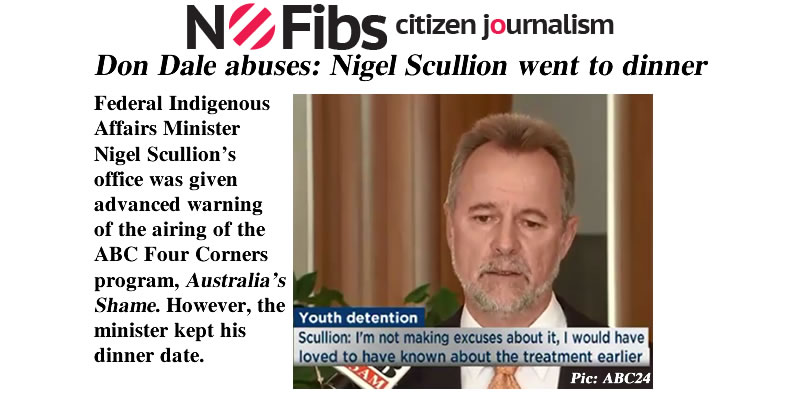 Federal Indigenous Affairs Minister Nigel Scullion’s office was given advanced warning of the airing of the ABC Four Corners program, Australia’s Shame. However, the minister kept his dinner date.

The shocking footage of teenagers being bound, tear gassed and thrown across prison cells in the Northern Territory’s Don Dale youth detention centre has appalled the nation. Despite multiple media reports over the years, none of the chief echelons at federal or territory level appear to have been aware.

On Tuesday, NT Coalition Senator Nigel Scullion told the media that he was unaware of the recordings of inmates being abused prior to the screening by Four Corners on Monday night.

“I haven’t seen the footage,” he told the media.

“I hadn’t actually seen the program last night. I was on the way home and from a family of a staff member and I was having dinner so we didn’t watch it and the PM rang me, fairly agitated, and said, “have you seen it?”. I said, “no mate.” He said, “well you better go home and see  it. Give me a ring.” So when I did go home and see it, it was, it was, just shocked me to the core.”

“The last time, just for clarity, I can recall back in October, vaguely last year, there was some commentary in the media about this but it was all about this has been taken care of, there’s another investigation and we’re adopting recommendations and that sort of thing, and I made an assumption that, we all need to be careful about assumptions, I assumed that the Northern Territory Government were taking care of this matter and I didn’t take any further action in that.”

In response to questions about ever having been given a briefing from the NT Government he responded with, “You don’t know what you don’t know.”

Later in the press conference, Mr Scullion stated that, “I wish I’d known what I know today or I knew yesterday afternoon, some time ago. But the facts of the matter were, I didn’t know. I’d never seen the vision. It hadn’t come to my attention. It hadn’t piqued my interest or sufficiently.”

However in a series of Tweets, Caro Meldrum-Hanna, the ABC journalist featured in the Four Corners program, reacted vehemently to Mr Scullion’s dinner engagement excuse for not viewing the footage. She confirmed that she had spoken to his office at around 1pm before the footage was aired.

“THIS STINKS: Scullion’s office asked me for an advanced copy of the #4Corners program yesterday. He went out to dinner instead of watching?” she wrote.

Ms Meldrum-Hanna later Tweeted that she had subsequently been contacted by Mr Scullion’s office and that, “the Minister was at dinner for “private sensitive matter involving one of my staff & family.”

Minister Scullion says he didn't watch #4Corners until @TurnbullMalcolm alerted him? I spoke with his office at around 1pm yesterday. 🤔🤔🤔

I spoke to Scullion's office yesterday lunchtime. They knew about the story & STILL didn't watch. What's going on? #4Corners @billshortenmp

Scullion's office asked me for an advanced copy of the #4Corners program yesterday. He went out to dinner last night instead of watching?

we did not give Scullion an advanced copy. Said he should watch it with the rest of Oz. He went out to dinner instead.

THIS STINKS: Scullion's office asked me for an advanced copy of the #4Corners program yesterday. He went out to dinner instead of watching?

Scullion's office just rang me. Advised that the Minister was at dinner for "private sensitive matter involving one of my staff & family"

Mr Scullion has offered an apology at the annual Garma festival in Arnhem land in the Northern Territory for not being aware of the full circumstances at the Don Dale Detention Centre.

“Now, I’m sorry I wasn’t aware of the full circumstances that were exposed this week,” he said.

“Clearly, I must be better informed about such matters particularly when the vast majority of youths held in detention in the Northern Territory are indigenous. I commit to better monitoring of the actions of all state and territory governments.”

Mr Scullion then responded to criticism in the media that he had only responded to the Four Corners program because Prime Minister Malcolm Turnbull had telephoned him.

“This is utter nonsense. I had a long standing engagement of a very important and private matter… that I honoured. I watched the program as many Australians did with horror and outrage when I returned home.”

The ABC has reported that Nigel Scullion has conceded he was briefed on abuse in the Northern Territory before a Senate question time in October, 2015. This contradicts his early statements of not knowing.

“Well, it was for a Question Time brief. We’d seen it in the paper and I said ‘Listen, what can you tell me about this, this might come up’,” he said.

“The report basically just provided a bit of background about the commissioner’s report when it was published.

“And it talked about — it said it looked at the use of tear gas during a three-hour siege by inmates.

“It talked about the report explaining approval to transfer five young people under the Youth Justice Act.