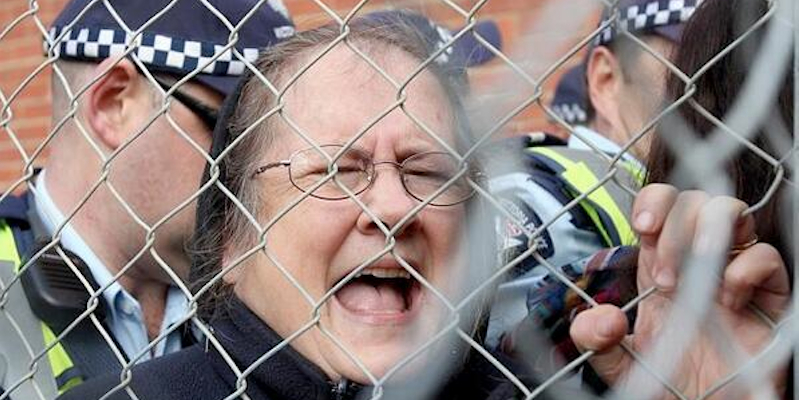 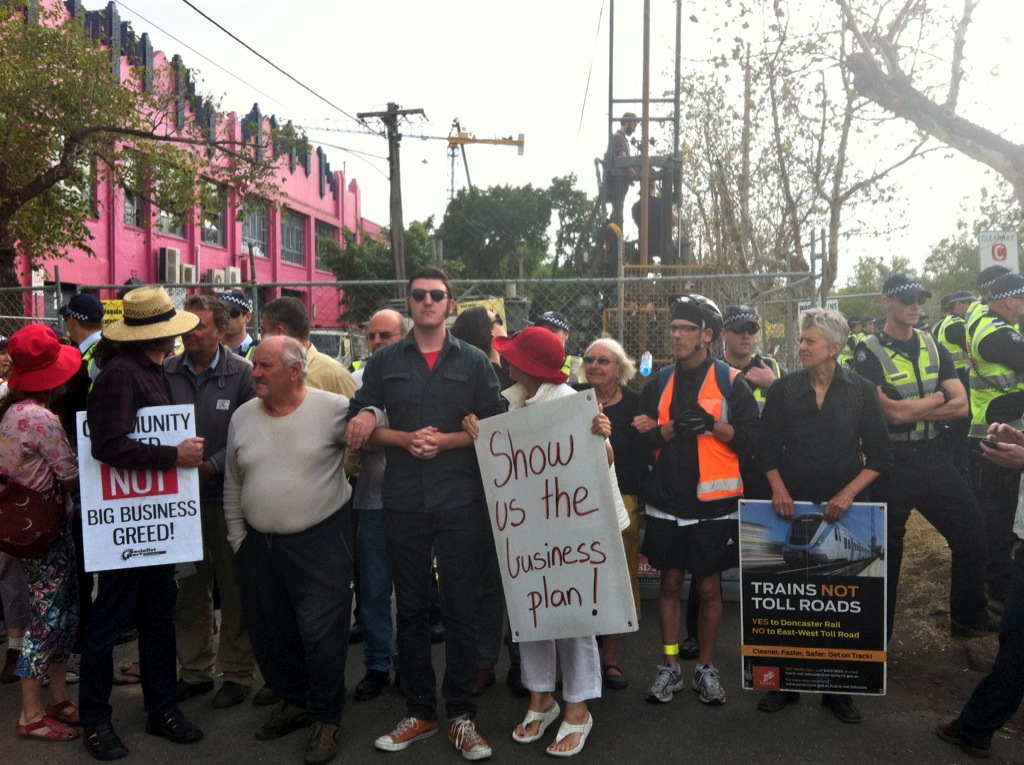 Since last October, around 30 to 40 picketers have held daily protests in the inner city streets of Collingwood, Fitzroy and Carlton.

There are all sorts on the pickets: maybe 200 picketers all up, local residents, some great young socialist types, public transport activists, and our community protest is backed by our excellent local Yarra Council.

A lot of us determined but peaceful protesters are women over 60 years old. We have the time.

We want a modern and green environment, to save Royal Park, preserve Melbourne’s past and make a visionary public transport future. We don’t want a concrete car-scape.

We want to slow the test drilling, to slow the signing of contacts, to allow Victorians to vote on the tunnel at the November 2014 state election.

Denis Napthine rules (barely) with the support of a single Independent. He thought maybe there were car votes in our swinging eastern electorates, and besides, how many Premiers can resist the allure of a really big mega-project? And the developers and the car lobby? Well, say no more!

But the voters have never been asked and the business case is not open to the public. While the Abbott Government has promised $1.5 billion towards the two-staged East-West $15–$17 billion project, Infrastructure Australia says there will be a cost benefit of a mere 80 cents per dollar.

So the voters don’t like it, and that’s why the picketers are out every morning the drillers are drilling.

It’s a 5.30am start for one and all, rain or shine. We are all getting tired…

The police have to be there too. They get up at as early as 2am, put on their gear, travel (often a long way), to stand around a cyclone fence and make sure some drillers can do their explorations in time to fit with a Premier’s contract signing pre-election schedule.

Shame job for the police! They have real work to do. They don’t want to pick up limp old ladies off the footpath!

Shame job for the police too, because we keep getting the better of them. We sit on those drill rigs in the wee hours of the morning, jump the fence, surround the machinery, the media comes…

Every week the police learn a new way to stop us, and every week we find another loophole, because we are community, we have become friends, we are staunch and we are random, doing unplanned acts, most days.

There have been no arrests, and we have slowed those drillers and the contracts. That was our aim.

And we got the public’s attention.

My claim to fame was that I stood on a drill rig for nearly 8 hours: “I could stand here all day. I do yoga,” I said (as quoted on the front of The Financial Review).

Well the press loved it. I just loved the attention, of course. Media celebrity for a day! Even the young ALDI check-out man recognised me from the television!

And older women everywhere were pleased for another older woman to strike such a pose.

So thanks Premier Denis Napthine. I do believe you won’t get your tunnel. There’s just not enough vision there. Next election you’re out.

But I’ve got my vision, through the friendship of all those picketers, young and old. 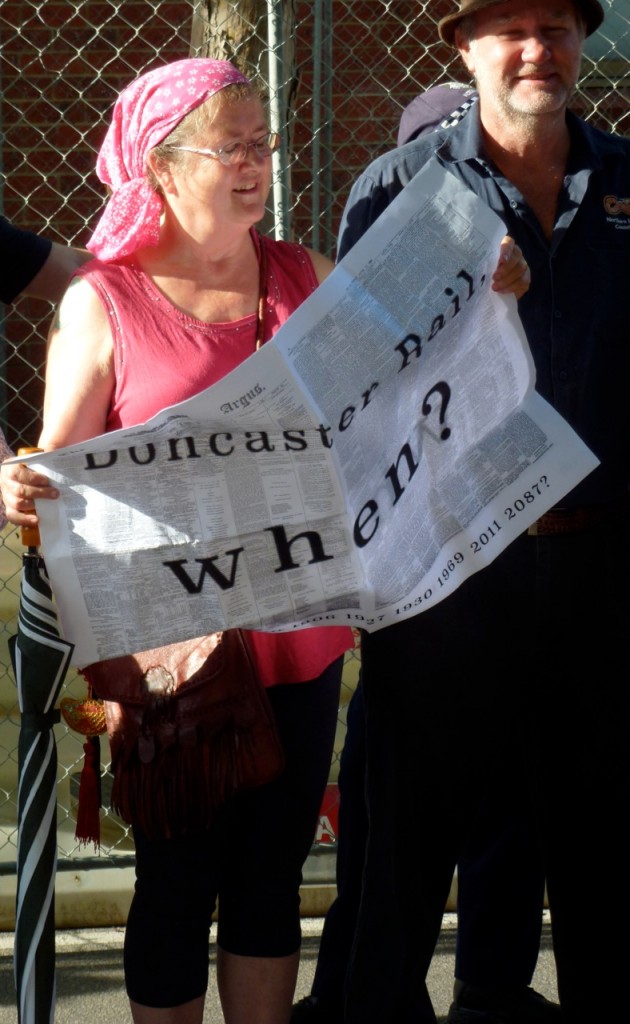 Rosie with her partner Brendan at the picket line.

At 60 years old I’ve now got no boss, no kids, no public image to maintain, no fear, nothing to lose. I’ve found some freedom. I can say and do what has become important to me over the years.

And the police? After some rough starts, most of them are quite nice to us older ones these days. Wouldn’t do for police PR to take us old ladies to court for going floppy on the pavement!

Anyway, quite a few of them agree with us.

So maybe I will spend the last twenty years of my retiring life being a Serial Pest. Maybe there’s lots of us out there, what with things being as they are in the world, and no likelihood of me having grandkids for a long while yet…

So, if it’s a choice between life in a stay-at-home-on-line-neo-con limbo, or getting out and making a nuisance of myself  – well, there’s no contest.

So now I see how to do it my way when passing drivers sometimes yells out at us: “Get a job!”

It’s public transport, environment, community, animals, trees, oceans and stupidity. Sounds like a Grandmother’s vocation to me. Retiring? Hell no. Getting a life. Learnt to Twitter. I’ve just got that new job! No shortage of drill rigs to stand on!