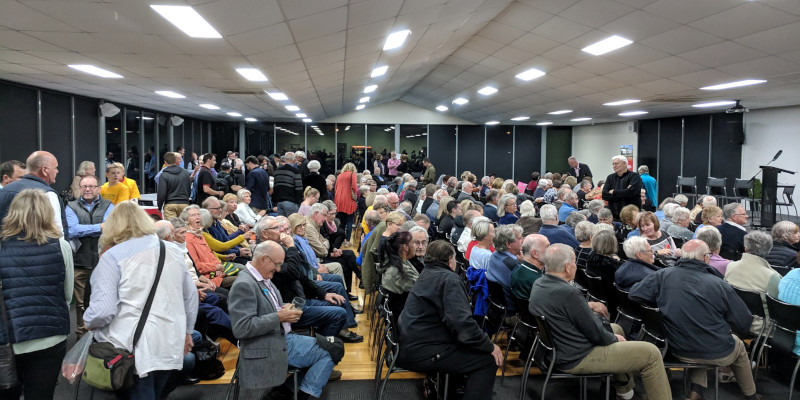 The evening started with a short introduction from each of the candidates, then questions from voters that each had a chance to answer.

Both Haines and Kerr started their introduction by acknowledging the traditional owners.

Haines got a rousing reception when she mentioned #ClimateAction.

Haines – We need rural and regional planning, the government has a report they could act. We need climate policy with a rural focus, education and systematic barriers, rural health access. #indivotes #benalla #meetthecandidates #auspol #ausvotes

The first question was about the laws the Morrison Government is promising if re-elected.

The Morrison Government will, if re-elected, introduce a new criminal offence specifically designed to protect Australian farmers from the sort of vigilante action we have seen this week.

All condemned the actions of animal welfare activists — Wheatland cautioned about losing the right to protest.

Fast trains were on the agenda and the youngest candidate, Kerr, pointed out it’s an issue at every election and it’s just time to do it — I thought of The Bullet Train Guy from the 2013 campaign.

Kerr was a candidate at the 2016 election and during a Sky forum spoke strongly against his party’s refugee policy, completely missed by the media during Mirabella’s explosive revelations about the Abbott Government cutting Wangaratta Hospital funding by $10m because she’d lost Indi in 2013.

Haines and Kerr want the Adani coal mine in the Galilee Basin stopped, Martin started his answer by defending coal and launching an attack on, Haines that was shut down as quickly as it started.

Nats Byatt won’t say if for or against Adani

On Sunday at her launch in Wodonga, Haines declared the coming federal election a #ClimateElection and in Benalla last night Lib Martin briefly demonstrated he’s willing to accept that challenge.

The Standout feature of the night was the attendance, once again #IndiVotes is embracing participatory democracy.

You can see my tweets from the night here.

I’m trying to get a copy of a video that was shot of the event, if I can I will post it as an update.