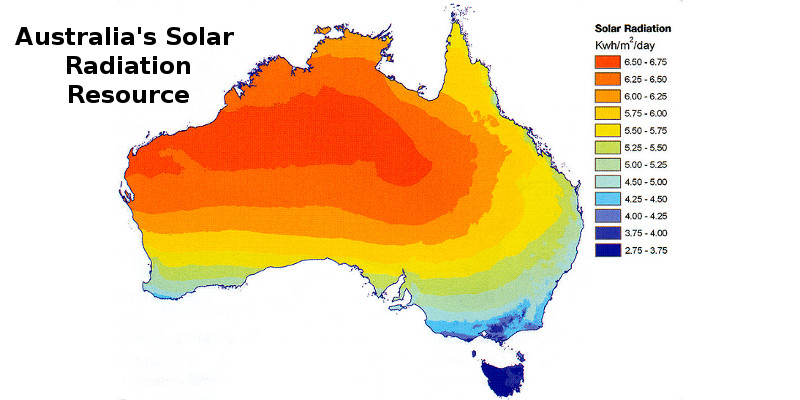 If our Australian political leaders had any vision they might consider a 21st century renewables energy scheme similar in scope and vision to the Snowy Mountains Hydro scheme, for northern Australia, and linking us with some of our northern neighbours.

Instead we have seen political pandering to the greed of fossil fuel companies, like the Chinese state owned company Shenhua proposing to develop the Watermark open cut coal mine on the fertile Liverpool Plains of NSW, with the dangers to groundwater, wildlife and agricultural productivity and food security.

Or the Indian conglomerate Adani that wants to develop the giant Carmichael coal mine in the Galilee basin of Queensland and hires Labor and Liberal staffers to make its case. Development of the Galilee basin coalfields by Adani and other Coal barons will enhance climate change and help drive destruction of the World Heritage listed Great Barrier Reef.

The folly of these new ventures is that with a structural decline in thermal coal prices according to IEEFA and CitiBank, they are no longer economic without substantial government subsidies, as well as contributing substantial greenhouse gases to the atmosphere during mining, and especially when burnt as a fuel. A study published in Nature in January 2015 found that 95 per cent of coal in the OECD Pacific region (mostly Australia), unless captured and stored with CCS technology, needs to remain unburned to limit global warming to an agreed temperature rise of no more than 2 degrees Celsius.

Tom Arup, writing in the Sydney Morning Herald, reported that the “IMF projected Australia would subsidise coal, petroleum and gas consumption by $41 billion in 2015. That is almost two per cent of our gross domestic product.”

It is surely time Australia made a major investment in our abundant renewable resources. I am talking about in particular developing large scale solar farms in the Northern Territory, Queensland and northern Western Australia to export that power to south east Asia. A pumped hydro scheme, perhaps incorporating Lake Argyle, would also be advantageous to include to maintain consistency of supply.

This would theoretically fit in with both Labor and Liberal Party policy aspiration for northern development and could be a bipartisan infrastructure development. It would bind our country into regional economic development and security and poverty alleviation in South East Asia. Sadly the media statement on the launch of the White Paper by Prime Minister Tony Abbott on Developing Northern Australia: Our North, Our Future, makes no mention of any major energy project.

Does the project sound mad? A white elephant?

Not when you run through the figures which a number of distinguished Australian Professors have done in a paper published in a peer reviewed journal in 2013 titled: Asia Pacific Super Grid – Solar electricity generation, storage and distribution (abstract). The full abstract says:

You can read a less technical appraisal at The Conversation: The north’s future is electrifying: powering Asia with renewables.

The researchers argue that the project makes sense due to the high solar insolation levels available in northern Australia. This would compensate for transmission losses estimated by Siemans at about 3 per cent per 1000 kilometres. State of the art high voltage DC (HVDC) backbone cabling could be used to provide up to 5GW of power to supplement local renewable sources to potentially over 300 million people by 2050 in several countries including Timor Leste, Indonesia, Singapore, Malaysia and perhaps Thailand.

The researchers assume a possible energy mix in South East Asia in 2050 is met from one third Australian solar energy, one third from indigenous solar energy, and one third from conventional energy sources. Tidal and geothermal are also viable sources of power for development in Indonesia in coming decades.

Such a project would create thousands of jobs in construction and ongoing jobs in operations and maintenance in northern Australia. It would also improve our research and technical expertise in solar PV tracking systems and software, and long distance and marine High Voltage DC transmission technology.

The Basslink transmission cable between Tasmania and Victoria was just a small practice run (280km) for this project. Norway already exports hydro power through the NorNed cable between Norway and the Netherlands (580 km along the bed of the Baltic Sea), and a Norway-England cable of over 700 km is currently being planned. The distance between Darwin and the south coast of Timor is just 600km, although laying a cable across the Timor trench with depths of 2-3km would provide a challenge.

Phase one could connect the solar array generation to the Darwin – Katherine Interconnected System to replace the Natural Gas and backup diesel power stations in the Northern Territory. 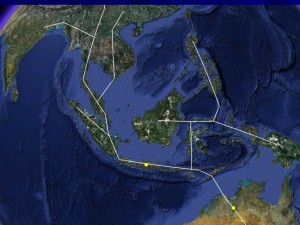 A Workshop on “Interconnection of Electricity Grids between Northern Australia and Southeast Asia” was held at Charles Darwin University, Darwin, on 29 – 30 July 2013. The two-day Workshop scoped possibilities and challenges in integrating electricity grids in Northern Australia and Southeast Asia to enhance opportunities for the generation and distribution of renewable energy, improve energy security and cut energy poverty in the region.

This workshop noted several challenges, including technical challenges of laying one of the longest and certainly the deepest marine undersea cable, the capacity of the electricity grid in Indonesia and Timor Leste to cope with new supply, the price differential between solar energy exported to Indonesia and local power price, regulatory power arrangements in Indonesia and other SE Asian nations, and generating the finance to cover the large CAPEX involved in the initial cable installation and solar arrays.

“A very rough estimate for an Australia-Asia Interconnector and associated renewable energy generation was considered to be $8-10 billion, including 2000 km of HVDC subsea cable ($1-2 million per km), 1000Megawatt of solar PV and solar thermal ($2-3 million per MW), $18 million for Indonesian geothermal, and $18 million to upgrade or duplicate existing land AC transmission networks and $18 million for AC-DC converters and contingencies.” the workshop report stated.

Reduced fossil fuels subsidies and introduction of price on carbon in the region would be very important to enable such a project to proceed, and government support and subsidy would be essential to get the project off the ground. The absence of this possible project being even mentioned in the recent Federal Government white paper: Developing Northern Australia: Our North, Our Future – is all the more glaring.

“The possibility of interconnecting grid between Australia and Southeast Asia will catalyse the
future plan in the region on electrification including utilizing renewable energy.” said Mr. Ade Padmo Sarwono, Consul of the Republic of Indonesia in Darwin in his opening address to the workshop.

The workshop identified the following key issues as important drivers for this ambitious concept project for exporting solar energy:

Almost certainly Darwin and Katherine could go solar with such a project!

“The NT already exports energy as LNG, oil and uranium to Asia, so why not solar-powered electricity too? As the price of fossil fuels slowly ramp up in Asian nations and as technology and falling costs make grid connection between Australia and Asia a real prospect to catalyse regional renewable energy, there will be increasing interest – and investment – in the proposal.” said Hon Peter Chandler MLA, Minister for Lands, Planning and Environment, in the Northern Territory Government in his opening address to the workshop. 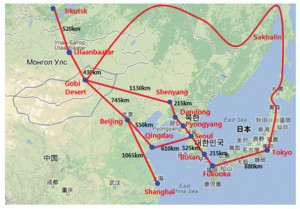 Other major Asian renewable and grid interconnector projects are also in the formulation phase. A conference paper for the 6th World Conference of Photovoltaic Energy Conversion (WCPEC-6), November 24- 27, 2014, Kyoto, Japan, outlined that the excellent solar resources of the Gobi desert could be utilized for connecting a North East Asia grid incorporating the load centers in China, Korea and Japan. See Gobitec and Asian Super Grid for Renewable Energies in Northeast Asia (2014) (PDF) for a full appraisal of this 100GW grid network.

Increasingly power grids are becoming interconnected with the addition and incorporation of renewables to transform our electricity infrastructure. Norway is using it’s enormous hydro power facilities to become the pumped hydro energy storage for Europe through increased grid interconnection. In February 2015 Pradhnya Tajne wrote in altenergymag.com about the development of Large-scale Super power Grid Projects that would incorporate renewable energy supply.

Moving forward, the Gobitec project analysis suggests more research into the potential and integration into national electricity grids and strategies is important for these mega projects, along with development of a transparent and fair legal framework across the national jurisdictions involved to provide a stable environment for private investment.

But the greatest benefit of an Australian-Asian interconnector would be in supplying carbon free energy at reasonable cost to a south east Asian market that is forecast to grow in energy demand.

In coming up with solutions to climate change and energy supply we need to think outside the picture, and not necessarily restrict ourselves just to parochial projects for our own needs.