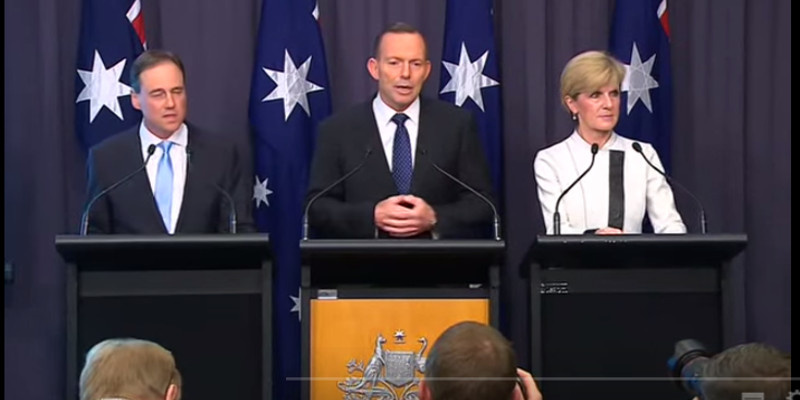 In comparison, the Climate Change Authority which has investigated both the science and comparative international action, called for a 40 to 60 per cent cut on 2000 levels by 2030. Other reputable organisations have also called for higher targets. The Australian Academy of Science called for emissions cuts of 30 to 40 per cent for the same period. The independent Climate Institute urged a 45 per cent cut on 2005 levels by 2025.

“The initial target offer ahead of the Paris climate negotiations in December is a core test of the government’s climate and economic credibility,” said John Connor, CEO of The Climate Institute in a media statement. “This target fails tests both of scientific credibility and economic responsibility in a world increasingly focused on modernising and cleaning up energy as well as economic systems. This target is bad for the climate and bad for our international competitiveness.”

During the press conference in answer to a question from a journalist Tony Abbott outlined that protecting the coal industry was more important than protecting the environment: “Our policy doesn’t depend upon the demise of coal. In fact, the only way to protect the coal industry is to go with the sorts of policies that we have. That’s why I think our policies are not only good for the environment but very good for jobs.” he said.

In a recent public opinion poll 50 per cent of respondents wanted renewables favoured over coal and only 6 per cent favoured support for the coal industry over renewables.

Foreign Minister Julie Bishop, to a question whether Australia is still committed to keeping temperature rises below two degrees? and how Australia’s target fits in with that goal which we agreed to in Cancun in 2010, responded by evading and not answering the question. “The Paris meeting is about getting a global agreement where every country puts forward their targets in advance of the meeting and then there will be a discussion about the framework action that would be required in order to meet the two degree goal.” she replied.

Environment Minister Greg Hunt outlined how the Government would achieve these targets without a carbon price. They will continue using the Emissions Reduction Fund with the addition of the safeguards mechanism. Other measures include developing vehicle efficiency standards, implementing ozone and fluoro carbon measures as part of the next round of the Montreal Protocol, and develeopments in technological change such as in battery storage technologies.

When asked if other abatement measures would leave room for lifting the Renewable energy target, Prime Minister Abbott responded, “It doesn’t depend upon a higher Renewable Energy Target. It assumes the target that is now in place, which is effectively a 23 per cent target.” 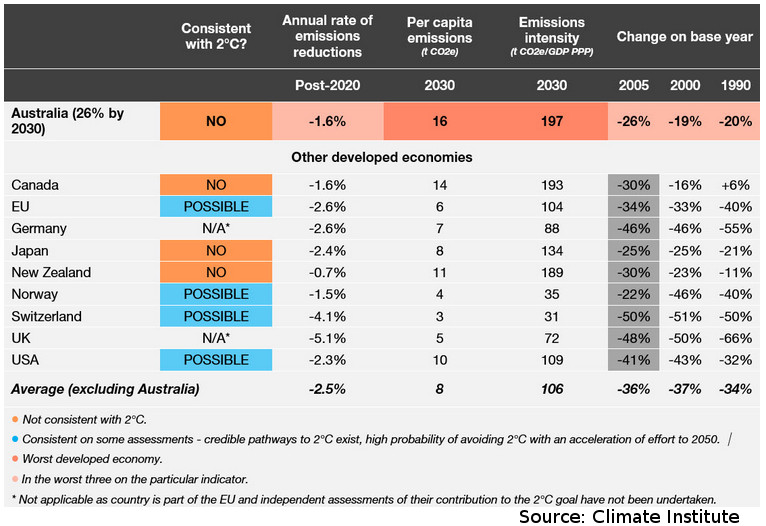 Even Canada, seen as being very weak with their post 2020 targets, committed to 30 per cent reduction by 2030 on 2005 levels. Australia doesn’t even match the Canadian low targets. We are on par with Japan which has a 25 per cent target by 2030.

If the rest of world followed Australia's lead, the Great Barrier Reef would disappear. So would my country. http://t.co/IfXLiP64vn #climate

Our commitment is not even equal to current US action and our per capita emissions would remain extremely high by international standards. Australia’s 2010 per capita emissions were about 26 tonnes CO2e. With a 25 per cent cut on 2005 levels this would reduce to 16t/CO2e per person, still the worst among developed countries. 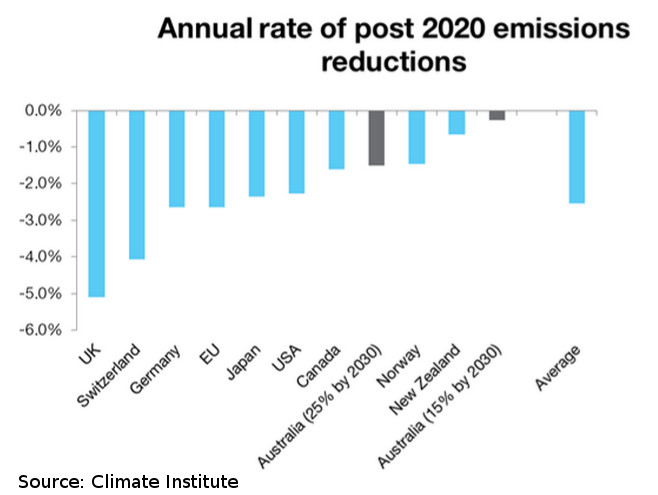 Australia’s current commitment to the United Nations Framework Convention on Climate Change (UNFCCC) is to reduce emissions by 5 per cent by 2020, based on the level of emissions in 2000. This was part of a range committed to by Kevin Rudd at Copenhagen in 2009 of 5 per cent to 25 per cent.

In March 2014 the Climate Change Authority assessment said comparative international conditions had been met to lift our 2020 target to 19 per cent on 2000 levels, but the Abbott government has refused to budge to lift Australia’s near term target. The Australian government has remained in denial in action on climate change, with Australia’s Foreign minister Julie Bishop shunned at UN climate summit in September 2014.

Australia’s low targets came under questioning and veiled international criticism at the Bonn climate talks in June 2015, in the lead up to the Paris Climate Conference (COP21) at the end of this year.

Opposition Spokesman on climate change, Labor MP Mark Butler said in a statement that it was committing Australia to one of the weakest emissions reduction targets in the developed world.

“If his own Cabinet couldn’t trust Mr Abbott to take climate change seriously, how can Australians?

“The Climate Institute has indicated Mr Abbott’s target is consistent with global warming of three to four degrees. This is despite the Government and Labor committing to limiting global warming to no more than two degrees, along with China, the US, the UK and all the major economies around the world.”

Director of the Climate Change Research Centre at UNSW Professor Steven Sherwood said the target was about half what was really needed and would reinforce global attitudes that Australia is a climate leaner, not a lifter.

“Though it could have been worse, a 26 per cent target is about half of what is really needed, and is weak enough to reinforce Australia’s new reputation as the world’s foot-dragger.

“Global warming poses a much more serious risk to our future economy than conservation or alternative energy would, so that excuse makes absolutely no sense.” said Sherwood.

Associate Professor Frank Jotzo, Director of the Centre for Climate Economics and Policy at the Crawford School of Public Policy, ANU highlighted that the 26 to 28 per cent target falls far short of the agrees 2 degree goal, and although other countries also fall short it is by a lesser amount than Australia.

“Among the international community, the target is likely to be perceived as falling short in its ambition relative to Australia’s opportunities to cut emissions deeply. However this target means Australia is at least on the boat with international climate action, even if considered a laggard. Domestically it opens the door to stronger climate change action.

“A credible plan for domestic policy to achieve the target will be needed.” said Jotzo.

“In per capita terms, Australia’s emissions are the highest among all major countries, and this would continue under the announced target. At 2030, emissions per person in Australia would be double the levels targeted in the EU and Japan, and higher than the targeted levels in the United States and Canada. Part of the reason is emissions intensive production of commodities for export, but in this field as in many others Australia has good opportunities for cutting emissions by improving technologies and modernizing the economy.” concluded Jotzo.

Tony Abbott stressed that climate action should not come at the expense of economic prosperity or damage the economy. Yet this assumption is deeply flawed as while some companies and sectors may see increased costs and need to change, others will grow as part of an economic transition.

Adjunct Professor Alan Pears, a Senior Lecturer in Global, Urban and Social Studies at RMIT University, rejected Abbott’s statement that strong targets necessarily come at the expense of the economy and jobs.

“The government’s assumption that setting a globally responsible, stronger target will damage the Australian economy is deeply flawed.” said Pears.

Pears articulated that “As expert groups like the International Energy Agency and IPCC have pointed out, there is substantial negative cost (ie profitable) abatement potential available, much of it through energy efficiency improvement and innovation. At the same time, as noted by Prof Ross Garnaut and Dr Frank Jotzo, the cost of many abatement measures, such as renewable energy, has declined much faster than expected, and will continue to fall through economies of scale and ‘learning by doing’ if we support them. Further, we can now see that trying to prop up our fossil fuel industries while global demand for them falls is a false economy that undermines our overall economic future.”

Professor Roger Jones from the Victoria Institute of Strategic Economic Studies (VISES), Victoria University, also levelled criticism of the lack of integration of policy instruments. The Government is refusing to use the advice of the Climate Change Authority, abolished the carbon price, wound back the Renewable Energy Target, sought to undermine renewable energy investment, attempted to stiffle the Clean Energy Finance Corporation through changing it’s mandate to return unrealistic returns and investments.

“Without proper joined-up policy that involves a carbon price, integrated with a mature energy policy designed to make the transition from coal to low-carbon energy as profitable and equitable as possible, such targets are of little use.” said Jones.

“If the government will not use their own experts (the Climate Authority), then any amount of modelling to rustle up ‘evidence’ to support their position is a waste of everyone’s time. The world is moving so fast that these empty gestures will soon be forgotten, except as a historical footnote.” said Jones.

“This week’s decision on Australia’s initial post-2020 climate commitment comes as nearly two thirds of Australian believe that the ‘Abbott government should take climate change more seriously’, a surge of 6 per cent from last year,”

“Despite a year which has seen renewable energy targets wound back, and attacks on wind power, support for both solar and wind in Australians’ preferred energy mix has grown.”

“Most (84 per cent, up 2 points) prefer solar amongst their top three energy sources, followed by wind (69 per cent, up 5 points). Gas and nuclear both crashed 7 points to 21 and 13 per cent respectively, with nuclear and coal now tied as least preferred.”

“Support for regulating and limiting carbon pollution is very strong with two in three (67 per cent) agreeing governments need to regulate carbon pollution and only 9 per cent disagreeing.”

“The core element of the government’s ‘Direct Action’ plan, the taxpayer backed Emissions Reduction Fund, is unpopular with over three quarters (76 per cent) agreeing that policy should shift responsibility for pollution reduction to the polluters not taxpayers.”

“The ALP’s recent renewables goal and climate announcements appear to better reflect public sentiment. But their policy detail, and its communication, will be important as there are questions, almost half (47 per cent) think that ALP policies will ‘just increase electricity prices and not do much about pollution’.”

“Our research also shows the carbon tax spectre still has some sting but perhaps less than would be expected. A third (36 per cent) agree they won’t vote for the ALP because they will bring back the carbon tax, with a quarter (24 per cent) neutral and 28 per cent disagreeing.”

“The government and the opposition have an opportunity to join mainstream Australian attitudes with climate commitments and policies which can limit carbon pollution, encourage renewable energy and clean up our energy system,” concluded Connor.

This is in agreement with previous public opinion. A July 2015 Essential research poll found Renewables firmly favoured by Australian Public. The half a million sample size in the Votecompass survey prior to the 2013 election found that most people supported carbon pricing and favoured strong climate action. Opinion survey during the middle of 2014 revealed Australians wanted the Australian Government to provide leadership on climate action.

As @TonyAbbottMHR tells Australians will be the biggest carbon cutters per capita, @climateinstitut begs to differ: pic.twitter.com/G0G660H3v7

Australia, out of touch trailing behind developing nations with their climate change #INDC# ClimateChange #COP21 http://t.co/3wqrDGWsoF

How will the world respond to Australia’s post-2020 climate target? https://t.co/hM8GvIAkDu pic.twitter.com/r89CQib71Y

Gov's targets mean in 2030 Aus will emit two and a half times more per person that the USA and five times more than the UK. @climatecouncil

Australia now at the back of the pack in terms of climate ambition: @Greens Senator @larissawaters #auspol http://t.co/APDNLXRzJz