For #Paris2015 UK and Australia compared on #climateaction by @Takvera 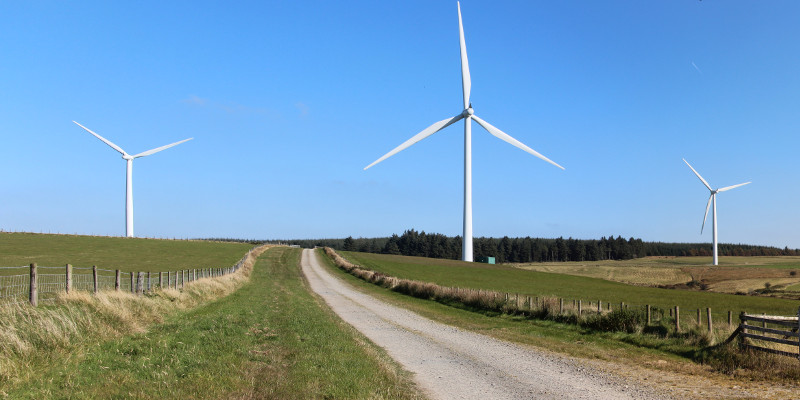 I am on a journey to the UN Paris Climate Change Conference starting on 30 November. My daughter Tarryn and I are travelling the UK and Europe in the prelude to attending the Conference.

While negotiators have managed to reduce the negotiating text from 86 pages to 20 pages (Draft agreement 5th October PDF), the pledged commitments still result in the global average temperature rise to 2.7 degrees C by the end of the century according to Climate Action Tracker.

Over past months in Melbourne this year Tarryn and I participated in a number of tree and native grass plantings along Merri Creek (Photos) to offset carbon flight emissions. It was also time for Tarryn to experience other cultures first hand, to provide a formative educational travel experience. A week in Italy may also help with her Italian language which she has been learning since Prep.

It also provided an opportunity to catch up with friends that moved to Teignmouth in Devon five years ago, and to revisit a few of the places from my epic 3 month bicycle tour of England, Scotland and Wales in 1988.

But my time on this trip is more limited, hence a hire car to visit Devon, Cornwall and Wales. See my first report at Climate Action Moreland: Europe Diary: Report from the UK on renewables. 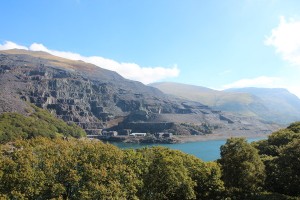 Driving around south west England and Wales I noticed the numerous wind farms. After a few false starts up country laneways I even managed to visit the heart of the Alltwalis Windfarm near Pencader in Wales. It was a beautiful afternoon with the blades turning in. A small herd of horses grazed at the base of one turbine, sheep near another.

In the Snowdonia region of northern Wales, the Dinorwig Power Station, a 1,728-megawatt (2,317,000 hp) pumped-storage hydroelectric scheme, near Dinorwig, Llanberis, uses 16km of tunnels to store and pump water to supply energy. It is located at the site of a slate quarry and provides short term operating reserve power for the national grid. It was completed in 1984 after 10 years of construction. 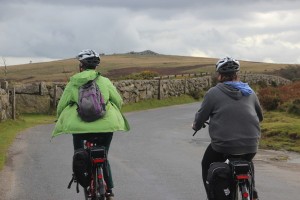 But like Australia, there are those who resist rollout of wind and solar at every opportunity. With so much history and prehistory associated with the landscape it is easy to argue that wind or solar impacts the heritage values even though there is often a long history of land use change to accommodate aspects of industrialisation and cultural change.

I spent one glorious day exploring Dartmoor by Electric peddle assist bicycles with my daughter and a local guide, Inga from Dartmoor Walks this way. While there are no windfarms or solar farms on Dartmoor, I learnt a little in the way settlement and landuse have changed over thousands of years, including the tin mining that was undertaken, and the importance of Dartmoor as a huge natural sponge for supplying and moderating streamflow in many of Devon’s rivers. (See my Dartmoor by E-bike Flickr Photo album) 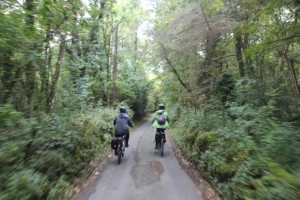 Riding the valleys in Dartmoor

When I mentioned I was attending the Paris climate conference, Inga mentioned that one local idea to express support for the weekend of global action on 27-29 November was to organise a gathering on the moor at one of the Tors which was used as a gathering place in the past by the Tin miners. Such a gathering in November at such a high and windswept location may not come to fruition, but I look forward to hearing aboutwhat they do, whether a gathering on the moor, or in a local town. 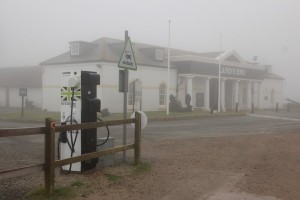 While I was disappointed with the commercialisation at Land’s End, I also found an electric car charging station there. Just up the coast at Cape Cornwall there was a far less commercialised experience with plenty of natural beauty.

While tell tale wind turbines are easy to spot when driving through the landscape, solar farms are more low profile but these too have been proliferating.

While Australia has 1.4 million solar PV households, UK has a larger focus on utility scale solar, with residential solar PV takeup still growing from a relatively small base. 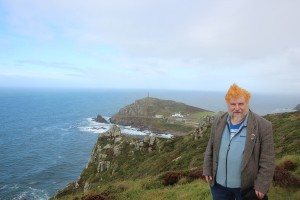 In comparison rooftop Solar PV eligible for a solar Feed in Tarriff, mainly for residences, stood at 3,268 MW across 735,281 installations. This represents 41 per cent of total solar capacity, and 98 per cent of all installations.

As Alex Kirby from Climate Network News reports, electricity from renewable sources has now reached 25 per cent in the UK, but the government is reducing support for renewables while continuing subsidies for nuclear and fossil-fuel resources and intent on using fracking to exploit shale gas.

The tory Government of David Cameron have been encouraging shale gas exploration through fracking, but their efforts have also being met by strong community protest.

Wind turbine or shale gas well? What would the UK public prefer near their home? http://t.co/f8o0cSodZh pic.twitter.com/5tRJWWM74v

According to the Climate Network News report Dale Vince, who founded the green energy company Ecotricity in 1995 which supplies almost 170,000 British customers with wind and solar power, said the International Monetary Fund put UK subsidies to the fossil industries in Britain at £30 billion (US$45.5 bn) annually – more than £1,000 ($1,500) per household per year.

“In contrast, support for all renewable energy amounted to £2.6 billion last year, about £100 per household per year, with onshore wind − which is the main focus of government attacks − adding just £10 to household energy bills.

“Government says only renewable energy has to stand on its own two feet. It makes no economic sense.”

“Unfortunately, the government appears ideologically opposed to renewable energy and has moved to put a stop to this incredible success story.

“It is not just cutting all support and increasing planning hurdles, but even going so far as to make renewable energy pay the Climate Change Levy, which is (or was) a tax on fossil fuels to fund climate change measures. Renewable energy in Britain now effectively subsidises the fossil fuel industry – to the tune of £1 billion every year.”

Greenpeace’s Energy Desk also reports that US solar giant Sun Edison had pulled out of the UK market selling it’s interest in The Mark Group, saying that the cuts to renewables subsidies “will essentially eliminate the solar PV market in the UK”.

The Leicester-based Mark Group promptly entered administration and nearly 1,000 jobs were lost as a result.

In a statement sent to Energydesk, SunEdison slammed the Department of Energy and Climate Change (DECC) for its U-turn on the ‘rooftop solar revolution’.

“We are extremely disappointed that the draconian policy proposals made by the government in August will essentially eliminate the solar PV market in the UK and have made our plans unviable”.

Despite this, PriceWaterhouseCooper’s annual Low Carbon Economy Index, which compares GDP growth to carbon emissions, found that the UK’s level of greenhouse gas emissions per dollar of GDP or carbon intensity, had fallen by 10.9pc last year. This compares with US’s carbon intensity falling by 1.6pc and Germany’s by 7.1pc. (The Telegraph Britain shows that world can cut carbon emissions and still get richer, says PwC)

Recently released Bloomberg New Energy Finance (BNEF) analysis reveals that “the global average levelised cost of electricity, or LCOE, for onshore wind nudged downwards from $85 per megawatt-hour in the first half of the year, to $83 in H2, while that for crystalline silicon PV solar fell from $129 to $122.”

Seb Henbest, head of Europe, Middle East and Africa at Bloomberg New Energy Finance, commented: “Our report shows wind and solar power continuing to get cheaper in 2015, helped by cheaper technology but also by lower finance costs. Meanwhile, coal and gas have got more expensive on the back of lower utilisation rates, and in Europe, higher carbon price assumptions following passage of the Market Stability Reserve reform.”

Luke Mills, energy analyst at Bloomberg New Energy Finance, said: “…onshore wind and solar PV are both now much more competitive against the established generation technologies than would have seemed possible only five or 10 years ago.”

Projections for renewables have continued to be substantially less than is actually happening, which is one of the few positives in the lead up to Paris UN climate talks.

IEA keeps updating its wind & solar projections, but they never catch up to reality. http://t.co/45A6L48dL4 pic.twitter.com/FqCmasI68G

Many UK pension funds, holding retirement savings for many workers, have suffered from inadequate climate risk assessment and failure to divest from coal and fossil fuels.

But there is still a substantial emissions gap in current pledges. And many of those pledges are conditional on climate finance, or relevant technology or climate adaptation support.

Some scientists even say UN pledges are approaching the problem the wrong way with more chance of failure and not adequately taking into account what we understand with co-operative behaviour for win-win solutions. They argue strongly for global carbon pricing with implementation being done in a variety of ways by each nation state.

The most important piece of writing I have ever co-authored: http://t.co/yFVRyvGGof Nature Comment @NatureNews pic.twitter.com/Vi4JSkp49D 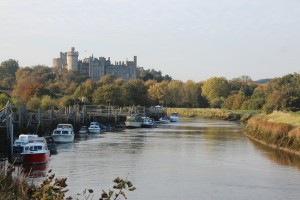 While there is a strong push for an agreement to come out of Paris, it will probably be insufficient by itself to close the emissions gap. The current draft agreement still leaves open both 2 degrees and 1.5 degrees targets. Five yearly reviews to promote increases in country emissions reduction commitments are also likely. And business, regional and city reductions can also help close the gap. In this process Australia remains a climate laggard with it’s low targets, although we share this distinction with a few other developed countries including Japan, Canada and New Zealand.

If we don’t take the necessary climate action it could leave human civilisation in ruins. Stonehenge might be our future as well as our past.