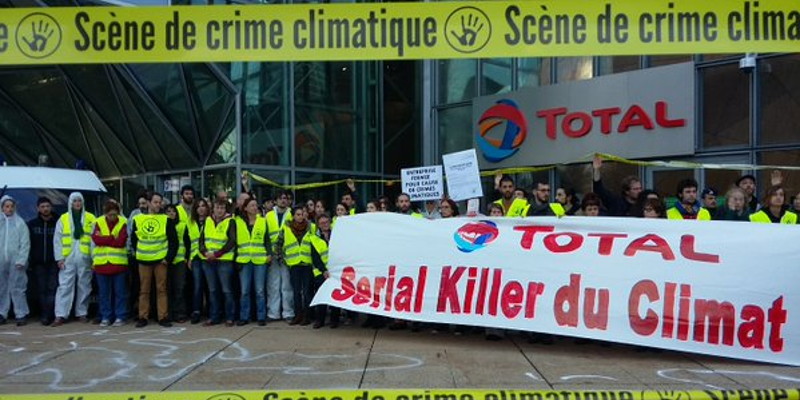 Paris: Climate activists this morning targeted the head office of French petroleum firm Total and accused them of crimes against humanity due to greenhouse gases destroying the climate. The CEO of Total, Mr Patrick Pouyanné, was cited in a convocation of ‘criminal’ climate practices of his company.

The protest action was organised by Action Non Violent COP21 (@anvcop21) with 112 activists transforming the square outside of Total’s headquarters in La Défense (Hauts-de-Seine) of Paris into a Crime Scene.

Activists gathered on subway platforms of the Metro before converging at the square at one time, to try and avoid early detection by police.

Le Monde reported about twenty policemen were around the entrance of the Total headquarters who looked on as the protest was peacefully played out, but activists alledge that five police vans and dozens of CRS (riot police) had been positioned to prevent them from approaching the building.

The protestors set up yellow neon crime scene tape, unfurled banners in English and French, and lay on the ground while silhouttes were made of the bodies with chalk.

A notice was left in place for the attention of Mr Patrick Pouyanné, CEO of Total for him to hear the criminal practices of his company.

The statement by the activists denounced the harmful role of business in climate change with Total being the 5th largest oil and gas company in the world. They alledge that Total contributes massively to climate change by harnessing the most polluting sources of energy on the planet, violating human rights and curbing energy transition.

Total is notably one of the 90 global companies that have issued most greenhouse gases in the atmosphere. Recent research by Heede (2014) has shown that individual investor or state owned corporations like Total are responsible for a substantial majority of greenhouse gas pollution causing climate change. Heede’s landmark paper was on Tracing anthropogenic carbon dioxide and methane emissions to fossil fuel and cement producers, 1854-2010. 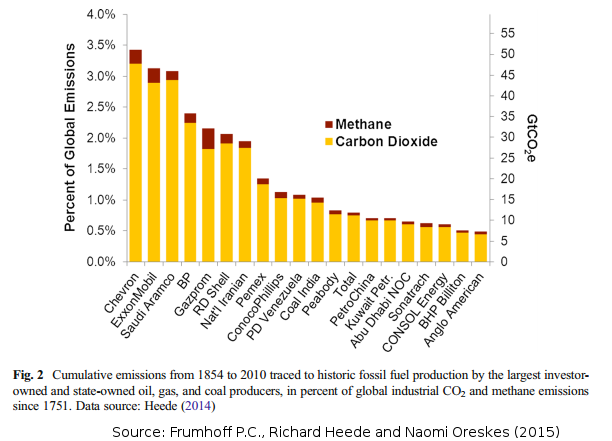 Total France was identified by Heede (2014) as number 13 in the top twenty investor and state-owned entities responsible for CO2 & CH4 emissions. In 2010 Total emitted 398 MtCO2e. The cumulative quantity of carbon pollution from 1854–2010 was 11,911 MtCO2e.This amounts to 0.82 per cent of total global cumulative emissions, more than many countries have emitted.

Another study by Peter C. Frumhoff, Richard Heede and Naomi Oreskes – argue that these 90 companies should carry a significant responsibility for climate change. Their Essay is titled The climate responsibilities of industrial carbon producers.

At the protest the activists highlighted in particular a number of practices of Total in destroying the climate:

“While climate change is already a tragedy for millions of people, Total acts as a climate serial killer by continuing to invest heavily in the most destructive techniques for the climate,” said Gayanhé Jovet, spokesman of NVA-COP21.

Even with these climate destructive policies, Total is one of the corporate sponsors of the ‘Agenda for Action Paris-Lima’ (FILA) and also of the Solutions Agenda of COP21.

Since 2014 the company has been aggressively advertising it’s brand as “engaged for a better energy”, a process of greenwashing it’s brand. The very aggressive lobbying techniques of Total has earned a nomination (en | fr) in the 2015 Climate Pinocchio Award(fr) in the category “Lobbying”.

Total was one of six European oil giants that wrote to UNFCCC Executive Secretary Christina Figueres in June 2015 calling for governments to price carbon and urging a climate agreement at COP21 in Paris. “Our companies are already taking a number of actions to help limit emissions … For us to do more, we need governments across the world to provide us with clear, stable, long-term, ambitious policy frameworks. We believe that a price on carbon should be a key element of these frameworks.” the statement said.

Other Austraian mining and energy interests detailed in the media release include a 30{17ac88c265afb328fa89088ab635a2a63864fdefdd7caa0964376053e8ea14b3} interest in the Ichthys LNG project operated by INPEX and currently being built in the Northern Territory. Total has interests in seven offshore exploration permits in the Browse basin, Bonaparte and Carnarvon, four of which are operated by the Group. Total also has an interest in four unconventional gas permits in the southern part of the Georgina Basin in central Australia.

At the protest in Paris Le Monde reported a little scuffle when nonviolent activists approached the front door of the Total headquarters. A policeman confided with a smile to his colleague: “they need to say that we no longer have the right to enter a crime scene”, reported Le Monde. 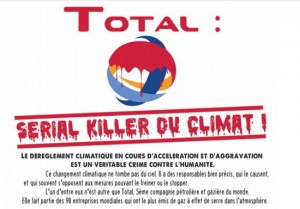 “Faced with the inaction of policy makers, citizens must massively mobilize, to be nonviolent and determined to stop the extremely destructive activities of Total. We will increase our actions for Total in the days and weeks ahead. First, we call on ANV-COP21 volunteers to organize denunciation of the actions of this climate serial killer on Saturday, November 14 throughout France. And we demand the immediate end of climaticide practices listed above, or immediate withdrawal of Total from the Solutions Agenda of COP21. Enough of double discourse on climate, we want action!” says Gayanhé Jovet.

A grassroots international call for the weekend of 28-29 November has gone out to mobilize people to pressure ministers and diplomats at COP21 in Paris which commences on 30 November. The mobilisation and civil society events in Paris are being organised by Coalition climate 21 (Facebook page).

Tens of thousands of people are expected to attend a rally and march in Paris on Sunday 29 November, to march from the Place de la Republic.