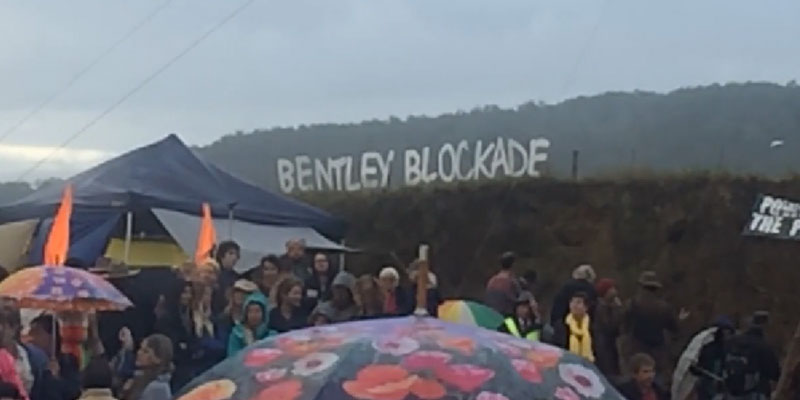 Citizen journalist at No Fibs
I am a Clinical Psychologist as well as a Herbalist and have worked as a natural therapist for over 30 years, particularly in women’s health. For all my adult life I have been passionate about feminism, politics, social justice, natural health and environmental issues. I take great pleasure in the numerous gifts nature provides. I don’t want to see Australia turned into giant gas fields and coal mines. I am a member of the Australian Labor Party.

I was born in western NSW and have lived for more than 30 years in the Northern Rivers. For 20 years I ran a walk-in herbal dispensary shop in Lismore, with the intention of making herbal medicines more accessible and affordable to the community.

Can You Hear Us – Bentley Blockade April 2014 by @ParisandDarmin

Dawn at Bentley is magic. It’s the time when we most deeply feel the preciousness of the earth we’re standing on, and reaffirm the imperative of protecting it for future generations.

Soft mist shrouds the gentle landscape. Rolling green pastures, trees just peeping through the foggy vista. The morning sky has golden beams of sun filtering through clouds. It doesn’t surprise me that images of dawn make up half of the photos posted online from Bentley. Hundreds of ‘protectors’ are camped at the #BentleyBlockade to help stop this beautiful rural landscape from becoming an industrial gasfield.

I became aware of the environmental and social nightmare of unconventional gas mining , as many people did, when I watched Josh Fox’s movie Gasland. It hit the consciousness with a sledgehammer.

It was only a few years ago, and I remember leaving the cinema with the guilty thought: “Thank goodness it’s not happening here”. Survivor guilt, while my heart went out to all those families in the United States whose health and livelihoods and farmlands were decimated. And now, it is happening here.

The local community is now educated and aware. By 2012 people in the nearby Lismore City Council area voted a resounding 87 per cent against CSG in a poll conducted by the Electoral Commission as part of the council election. Unfortunately, the major political parties are not listening.

The Bentley Blockade is an extraordinary happening. Upwards of 3000 people mobilised one morning for the dawn vigil at the main entrance gate. We were notified there was to be a visit by senior Sydney police, so we showed them the strength of the community’s opposition.

The daily greet-the-dawn vigil at Gate A is a deeply moving experience which has become a symbol of the blockade.

The camp is extremely well organised and resourced. Development approval for the camp was sought and obtained from Richmond Valley Council.

Metgasco CEO Peter Henderson likes to label the protectors as ‘anarchists’. I wonder if anarchy can possibly have so many rosters, meetings, trainings and layers of organisation? Volunteers provide traffic control, security, meet-and-greet, peacekeeping, first aid, toilet cleaning, and endless vigils. There’s even a roster for ‘Nanna Care’. The organisation is highly strategic, and utilises devolved  leadership with extraordinary success. This article in the Echonet Daily describes the camp.

The blockade itself consists of 24-hour vigils at each of the 3 entrance gates, with protectors called ‘Simmo’s’ ready to ‘lock-on’ when needed to delay (or hopefully stop) heavy equipment if and when it arrives. There are support buddies at each gate, and a steady supply of food, water, coffee, and anything else requested by these frontline people. The blockade is supported by the camp of hundreds of people on the adjoining farm, on standby to join the frontline as needed. Most of the neighbouring farmers are strongly opposed to the gas exploration, as shown in this article in the Northern Star.

On my first morning at #BentleyBlockade I visited protectors at Gate C, the furthest from the camp. A car pulled up, with breakfast delivery. Fresh toast, porridge, and stewed fruit in generous amounts. One of the frontline people told me he had been an activist for 20 years, and he has never been so well supported. The main concern at Gate C was the coffee plunger was broken.

The first job I volunteered to do was to go back to the camp and somehow find a spare coffee plunger. It didn’t take much time. The excitement on my return was palpable.

The nights are long! There’s quite an appreciation of good coffee at the camp, and it just seems to manifest. Whatever skills are needed, there is always someone. Barista, consultant planner, filmmaker, solicitor, welder, wheelbarrow pusher, all you have to do is put the word out. As I am a first aider and herbalist, I found myself drawn to the first aid tent. It’s where I feel comfortable and was able to help with some minor problems. Fortunately no resuscitations were needed.

The regular evening meeting happened at the campfire. Organisers keep protectors informed of any developments. Specific needs for urgent volunteer roles were filled. People then made their own arrangements for dinner. In the half dark we walked past the Knitting Nannas camp, and were invited in for dinner. We gladly accepted the generous offer. Lovely food, and the pumpkin soup was just amazing. Lots of chats, laughs, even saw a bit of knitting. In the morning I came back and bought a classic black and yellow knitted beret, read and accepted the ‘Nannafesto’, and have been accepted as a member! The Nannas are legendary, and I invite readers to check their Facebook page.

The Bentley Blockade has been declared a Category 4 Social Movement by those trained in activist theory. People who never dreamed they would be part of a protest are finding their voices, and finding allies in the most unlikely places.

This powerful social movement crosses the whole political spectrum, with National Party and Greens Party members side by side fighting a political battle where the mining companies and the governments supporting them are the ‘baddies’.

The blockade will be under considerable pressure in the coming weeks as Metgasco has the leverage of the ‘riot squad’ and other government authorities. The community will make sure it wins this battle, and Metgasco needs to know we will never go away. Bentley, will you show up?

Disclosure: I joined the ALP in September last year, as I felt strongly that the ordinary members could make a much better choice of party leader than the factions and I wanted to have a say. I also am a member of Our Sustainable Future Party, a micro local government party. My husband Simon Clough is a Lismore City Councillor, and the national chairman of Lock the Gate Alliance. My views and opinions are my own. I have an unashamed  left wing bias.