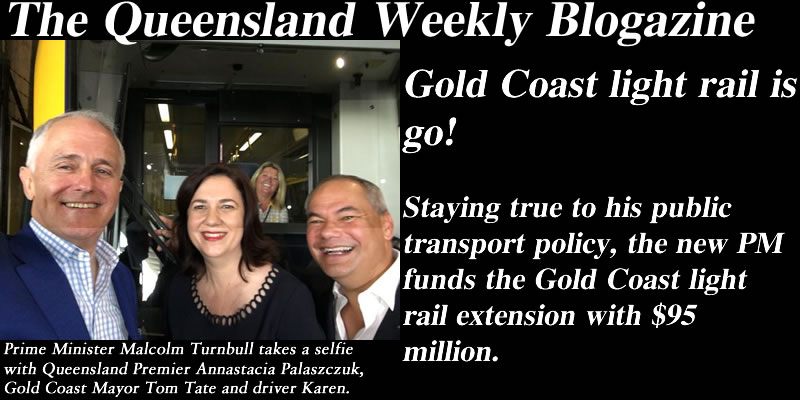 Blogging the week in Queensland politics and news. Check back for updates. 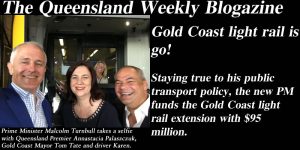 Today is a landmark day. I was proud to stand with @camerondickqld as he announced more smoke free spaces for QLD. pic.twitter.com/c6XaqLWVLT

Pippa Sheehan reported: The Prime Minister has agreed to meet with Senator Glenn Lazarus, over calls to overhaul the powers given to coal seam gas companies

The push for a World Surfing Reserve on the Gold Coast took off in March 2014.

No daylight saving for Queensland

while #daylightsaving might suit some latte sippers in SEQ it is impractical for the vast majority of Qlders in regional areas.

Unethical behaviour, bullying and breaches of the Local Government Act

“People don’t have anywhere to go”: Senator Glenn Lazarus on the suicide of George Bender

Ian Rickuss, a dinosaur lumbering around the parliament

Premier @AnnastaciaMP will be in Bundaberg with @bundyleanne this Sunday & Monday for community cabinet. #qldpol pic.twitter.com/BNoE1ABbUN

Qld Governor at the House

Out comes the Executive Council bag for today's meeting over which the Governor presided #qldpol pic.twitter.com/NMvi0mlW8G

Ten News Qld reported: Politicans from both sides have come together to address domestic violence

Learning all about coding from year 4 mentors on the interactive whiteboard at Bulimba SS. #codingcounts #qldpol pic.twitter.com/HtZFCj6wCX

Blatant scaremongering on education from LNP opposition today. I will always fight for education for all! pic.twitter.com/yaRagS6Bi6

Verity Barton in the news again

Can Do features in question time again

#qldpol Means-testing education Q from @TimNichollsMP gives Premier @AnnastaciaMP a chance to bring out 'Can do'. pic.twitter.com/oKWRSbTVmk

Taxi drivers rally at the gates

Premier @AnnastaciaMP wonders if 'Can Do' will make next year's Literary Awards. #qldpol pic.twitter.com/uUwqd3F3w3

Queensland Labour May Day returned to May

A win for workers, a win for Queensland. pic.twitter.com/9WIVDR5JRJ

Fraud and bullying in local government

Snake handling Exec Building security staff. As you do. pic.twitter.com/cyW2aaTInV

Just days after being cleared of domestic violence allegations, independent MP for Cook Billy Gordon is once again making news. Two unnamed women claim he sent them explicit photos via social media. A third has been charged with extorting Billy Gordon over a photo she alleges he sent her. For the full story see our NoFibs blog The Media Trial of Billy Gordon.

In perhaps a sign that combative politics is at an end, the long awaited decision on stage two of the Gold Coast light rail has been made with a $95 million commitment from Prime Minister Malcolm Turnbull to Queensland Premier Annastacia Palaszczuk and Gold Coast Mayor Tom Tate. Former Prime Minister Tony Abbott had refused to fund the project unless Queensland sold some of its assets in return for federal funding. Politically in the lead up to the next federal election, the policy that would have proven problematic in the state for the Liberal National Party after two state elections which saw the public reject the asset sales policies of both Labor and the LNP.

On July 10, 2015: “We are not in the business of funding urban public transport,” declared Former PM Tony Abbott about the Gold Coast light rail extension.

This week’s decision will see the project completed in time for the 2018 Commonwealth Games to be held on the Gold Coast.

Taking away the votes

What can you say…#qldpol #auspol Great @SatPaper read this week if you are bored ;) pic.twitter.com/XfyUpPB5mZ