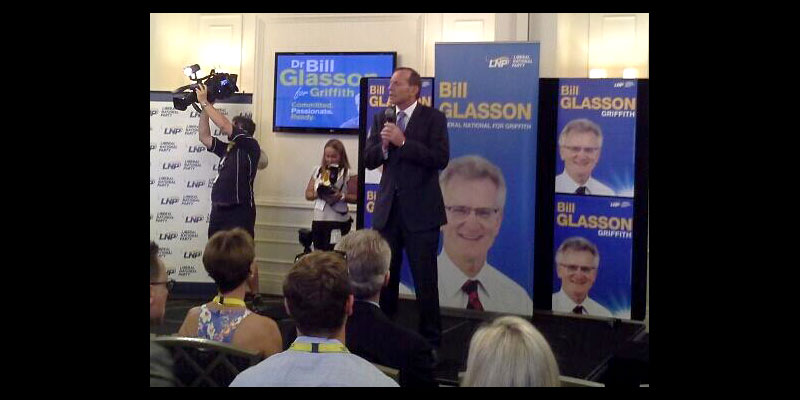 On Wednesday February 29 the LNP ran a mass virtual ‘town hall’ teleconference with voters in Griffith. Apparently Labor used this technology recently in Griffith to link party members with Opposition leader Bill Shorten and is planning something similar in the last week of the campaign.

I arrived home from work on Tuesday to see my voice mail flashing. I rarely use my landline and had expected one of the usual wrong number messages. Instead there was a recorded message from Dr Glasson inviting me to join, on the following evening, a virtual town hall meeting with himself and Foreign Minister Julie Bishop.

Dr Glasson talked to ABC 612 the day of the hook-up saying the call would be the first of its type in Queensland. He said it was set up to ensure as many caller questions could be taken as possible. Dr Glasson acknowledged in the interview that the call could only reach those voters with a landline, and that a lot of young people especially may miss out on the call.
As Dr Glasson’s office had not granted an interview, nor provided any responses to emailed questions, I was keen to take part but the message seemed to suggest I may have had to register. So while not hopeful of being include on the call, I nevertheless I lined up my recorder, pen and paper, and phone just in case.

The phone rang at 6:15 or so, and there I was on the call. I am an old hand at teleconferences, but the difference here of course was that I couldn’t just butt in and ask my questions, I had to wait to be invited. It was nothing like talk-back radio.

The moderator (I later found out was John Gatfield, ex of Sky News) carefully stage managed the event. He asked questions of Ms Bishop and Dr Glasson that were clearly pre-prepared, allowing them to expand on Dr Glasson’s priorities for the campaign.

Gatfield announced at one stage that there were 10,000 people on the call. I immediately thought that he had made an error, “surely he meant 1,000”? But no, he repeated the figure several times.. There are over 90,000 voters in Griffith and many of them I would assume do not have landlines, so 10,000 is a substantial chunk of voters.
David Van from public relations agency The De Wintern Group, which ran the call talked to ABC 612 the following day, and confirmed the 10,000 callers figure. Whether all 10,000 remained on the call for the duration is another question.

Most political advertising goes straight into the recycle bin, and parties rarely have the funds to run television ads in by-elections, so the clever thing about this telephone hook-up is that the caller gets a sense at least of being part of something more intimate and less contrived than the usual stuff. In fact we were part of an elaborate party advertisement.
The questions (many put by the moderator) ranged from fighting crime, the NBN, tax and business red tape and allowed Dr Glasson and Ms Bishop to expand on the Coalition’s policy objectives. It was incredible to hear how a question from a caller on personal income tax was turned by Ms Bishop into a justification of the abolition of the carbon tax. Was the caller satisfied with the answer? Who knows?

A ‘Dorothy Dixer’ to Ms Bishop from the Moderator, “Are you happy with the way things are going?” lead to a long statement from her on abolishing carbon tax, border control, infrastructure projects ….ending with, “we are getting on with meeting our promises to the Australian people.”

I live tweeted as best I could during the call (a skill I am still mastering) and was surprised to receive a direct message from the producer of the ABC 612’s Breakfast program asking me to appear the next morning to provide a callers point-of-view on the call. I had never imaged when I first ventured into citizen journalism that it could lead to this. You can listen to the ABC segment here.