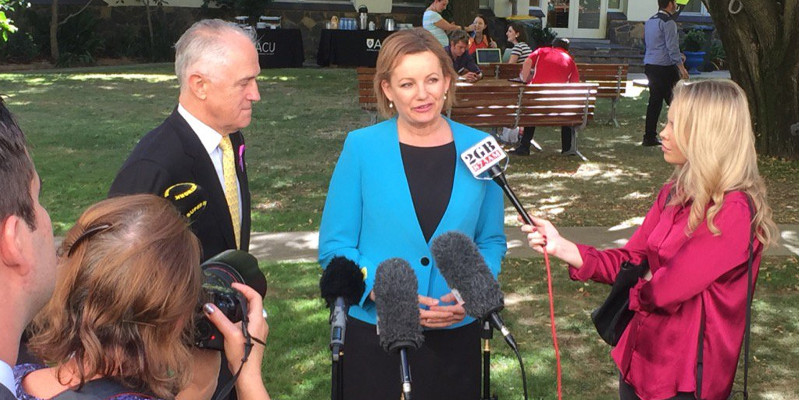 Is there a funding bias with the National Health and Medical Research Council (NHMRC) when it comes to climate change and health? and particularly extreme heat and population health?

Some climate and health researchers say there is a definite bias, over a number of years, against funding health and climate change related research projects. One result of this wide-spread perception, is that researchers self-censor their funding proposals to avoid mentioning climate change to stand a much better chance of grant approval.

From 2000 to 2015 the National Health and Medical Research Council funded just 30 research projects with a climate change component. Of these projects, just three relate to the impact of rising temperatures and extreme heat on population health.(1)

On the 3rd March Heath Minister Sussan Ley and Prime Minister Malcolm Turnbull announced $129.4 million in grants from the NHMRC to Australia’s preeminent researchers in health and medical research.(2)

“Health and medical research is essential for the development of more effective medical treatments and key to delivering real health benefits to Australians every day.” said Sussan Ley.

Ninety six projects were funded to start in 2016, yet only one of these was in any way related to climate change.(3) No doubt all of these projects were worthy of funding, yet climate change impact on health, being such a complex multi-dimensional slow moving crisis, was all but ignored in the latest funding round.

From 2000 to the present, the NRMHC funded only 2 projects on climate change related temperature and heat events and health. Associate Professor Keith Dear was funded in 2010 and 2011 to research ‘Changing Heat: direct impacts of temperature on health and productivity – current risks and climate change projections’. Dr Elizabeth Hanna was funded from 2012 to 2014 to research ‘Climate Change Impacts on Workplace Heat Extremes: Health Risk Estimates and Adaptive Options’.(1)

In November 2015 one climate change and health project was approved for funding going forward in 2016 and 2017. The funding application was from Dr Kathryn Bowen from the ANU for 2016 to 2017 ($175,303) in a Translating Research into Practice (TRIP) Fellowship. The proposal involves researching community adaptation and building community resilience to heat events. Her project description:

“Deaths from heat waves are avoidable. However we still experience such deaths, and it has been predicted that the frequency and intensity of heat waves in Australia will increase due to changes in the climate. It is therefore vital that our communities are prepared in times of extreme heat. Strengthening the ways that heatwave plans are implemented at a community level is an important way of increasing our ability to cope with such natural hazards, and also strengthens community resilience.” 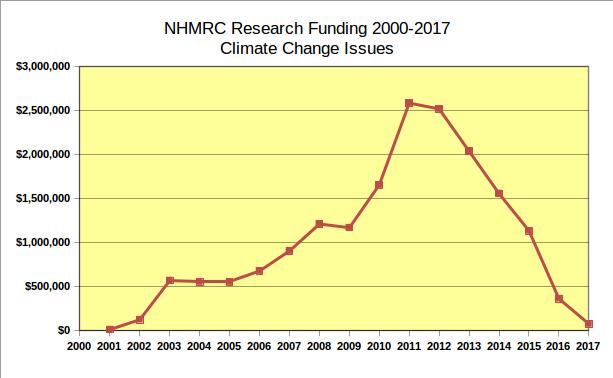 This graph, based on a NHMRC graph and data, shows a clear trend that approximately aligns with changes in Federal politics.

Colin D Butler, Professor of Public Health at the University of Canberra, outlined a rejection of his research proposal in 2014 in a blog post: Is Australia’s NH&MRC grant assessment process corrupted?.

The proposal also included advice and support from the Chief Medical Officer of Australia, the Chief Veterinary Officer of Australia and the Department of Defence as an Associate Investigator. A study to assess the impact of extreme heat on the Defence workforce was part of the proposal. Butler described the proposal as “the best of the three (group) grant applications I have been closely involved with and many people commented on how much they liked it.”

It sounded like it had many valuable research dimensions, yet the reviewers rejected it. Butler accused the anonymous reviewers of making factual errors in their comments, but his appeal to NHMRC was perfunctorily dismissed.

“The standard advice about applying for scientific grants in Australia is that assessments are random and good applicants should persist. But in the case of climate change and health I do not believe this is the case. And I believe it is the national interest to state this. Eventually, those with power in the NH&MRC system will realise the harm their outmoded beliefs are doing.” said Butler

.@skepticscience Not a single #NHMRC Project Grant in today's winners list on climate change. Can I smell a whiff of political interference?

So what is the problem here? It appears the NHMRC has an element of corruption in the application process, or is susceptible to political influence, when dealing with proposals on climate change and health.

The decline in funding is occurring just when we need to be increasing research on climate change impacts on health to better predict and engage in a medical and social response.

The impact of extreme heat is just one example which I am more fully cognisant of, but other climate related areas such as changes in disease vectors, impact of climate change on mental health, evaluating health adaptation strategies, among many others, would seem to be equally important to continue new research.

Extreme heat events cause more deaths in Australia than any other natural disaster (Coates, L. et al 2014). Heat events have a major impact on mortality and morbidity and the interaction betweenAdrian Barnett commented in October 2013: rising temperatures and impacts on human health on a population level is still far from being well understood.

Projections are that temperatures will continue to rise with climate change, with far more frequent and severe heat events projected to occurr in future.

Can we acclimatize to these temperatures and extreme events? Can we make the necessary adaptations? How will vulnerable groups cope and what are the best mechanisms for ensuring their safety?

The importance of research on heat and health was highlighted in the Climate Council latest report launched on 2 March: The Silent Killer: Climate Change and the health impacts of extreme heat.

Professor Lesley Hughes declared the issue clearly at the report launch: “We’ve had 39 consecutive years of above average temperature” she said, “The numbers of days per year that are exceptionally hot continue to increase…By 2100, at present rate of temperature increase, about three quarters of the country will have 190 days per year over 40°C”

“There will be increased child mortality and morbidity from heatwaves” said Professor Fiona Stanley. “We need national collaboration to respond to extreme heat” said Stanley. She expressed her anguish that the NHMRC was not funding research on climate and health, according to a tweet by Amanda MCkenzie, the CEO of the Climate Council.

Dr Liz Hanna: The research community have given up on getting funding for research into climate change and health #heathealth

You can read more on the launch of the report in my article: Storify: The Silent Killer: climate change and Public Health. The #HeatHealth report launch.

After the launch, twenty four climate and health experts from various disciplines came together for an Australian Summit on Extreme Heat and Health in Melbourne. They all agreed that extreme heat is a critical and growing health issue for Australians, but that while the health sector is key, it is only one part of the response.

Included in the Summit statement is a call for “Improved understanding of the impacts of heatwaves on human health, the environment, infrastructure and the economy, now and into the future”, and “assessment of current and future response capacity to heatwaves”.

The NHMRC needs to be funding research on climate and health instead of leaving us blind. Heat related deaths are potentially avoidable, but without the research we are likely to continue with haphazard policies at all levels of government that give some assistance, but still fail to prevent many deaths.

Note: The NHMRC graph was updated 8 March 2017 to incorporate the single climate change project (Bowen) approved in 2015 for expenditure for 2016-2017. JE