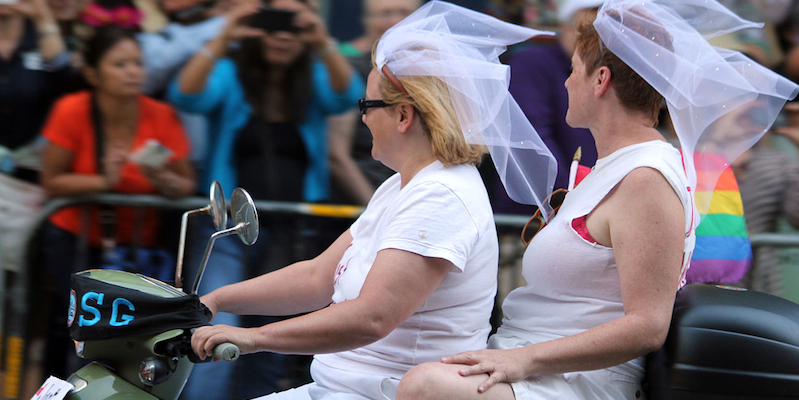 IN April 2013 Guardian Australia journalist Gay Alcorn declared the culture war was over for marriage equality and confidently asserted that after “a year or two” LGBTQI couples would bask in the same connubial rights as straight Australians. She declared the debate “interminably dull” and credited lobby group Australian Marriage Equality’s (AME) latest pitch for support – via the small business benefits of allowing same-sex marriage – with triggering her boredom threshold.

Because I didn’t think Alcorn’s angle helped the debate, I began a long analysis of the foot-dragging this political football has endured in Australia. Here we are eighteen months since her boredom levels peaked, and only one thing has changed: support for marriage equality in this country has skyrocketed since Alcorn reported a 54 per cent assent, to a whopping 72pc.

This is a world record – even in countries which have already passed marriage equality legislation, community support for same-sex marriage is nowhere near that high.

So, with apologies to Gay and anyone else who’s asleep on marriage equality, here’s why it’s already too late for anyone in the current political spectrum to bring full civil rights to lesbian and gay Australians.

After promising his cabinet would be free to raise the issue of marriage equality “after the election”, nobody in the Coalition party room seems keen to take up the challenge.

I have an undeniable gut feeling that twelve months “after the election”, if he was ever going to back marriage equality, Tony Abbott already would have done.

In order to lead Australia to marriage equality, our primary leader, our Prime Minister Tony Abbott, needs someone in his party to lead him to the debate.

His sister Christine Forster and her partner Virginia Edwards announced their engagement after the election. I imagine they’re getting quite impatient to tie the knot on home soil, and it’s Christine we have to thank for the latest news about her brother’s leadership on the issue, when she spoke at a Parents and Friends of Lesbians and Gays (PFLAG) event in Brisbane last month. 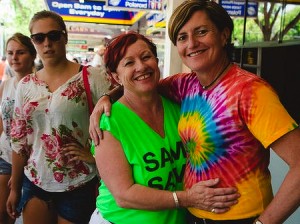 “I have been married, I am a gay woman, a lesbian, but I was married for 20 years,” Forster said, “so I know the significance of marriage and how that speaks to your community, friends and family and what it says about the special relationship you have with your partner”.

You read it right: in order to lead Australia to marriage equality, our primary leader, our Prime Minister Tony Abbott, needs someone in his party to lead him to the debate.

Even if this somehow qualifies as leadership, and even if by some miracle a Coalition minister has the guts a week, a month, a year from now, Tony Abbott will never escape the taint that he left it too long.

Laboring on equality despite Plibersek’s evolution

Australian LGBTQI must look elsewhere for our civil rights champion.

The Labor Party’s Tanya Plibersek has come a very long way on same-sex marriage, from towing the line against full LGBTQI equality under Kevin Rudd’s leadership in 2007 (while proudly championing Labor’s record on equality), to challenging the government to provide a co-sponsor to her 2014 private members bill for marriage equality.

But both Plibersek’s public gauntlet throws to the Coalition occurred while she was in opposition, and seemed designed to highlight the shortcomings of an incumbent government, because that’s the only impact they had.

Labor supports marriage equality without a binding ‘yes’ vote for their MPs, a situation which will not change unless the ALP national conference in 2015 agrees to it.

The last time a government had the numbers to do anything unilaterally was under Kevin Rudd’s first suck of the sauce bottle between 2007 and 2010, but the ALP didn’t do anything about marriage equality.

Not as late as some, but still too late, Tanya.

The sky did not fall down

Marriage equality arrived in Australia for a brief time when the ACT passed the Marriage Equality (Same Sex) Act 2013.

Alan Wright and Joel Player became the first Australian same-sex couple to marry under the fledgling legislation on December 7, 2013. 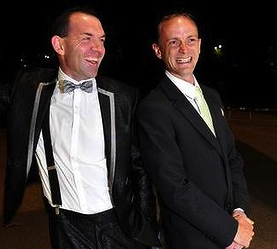 MARRIED AT MIDNIGHT Joel Player and Alan Wright married in Canberra at 12.01am. (Photo: Melissa Adams)

Fledging Attorney-General George Brandis couldn’t wait to put the territory law to a high court challenge, which handed down its findings on December 12, 2013, when six judges unanimously decided the ACT law was “inconsistent” with the federal Marriage Act.

After decades of inconsistency between state, territory and federal legislation on everything from homosexual criminality, de-facto recognition, superannuation, adoption and a host of other issues, the High Court suddenly demanded consistency.

Too late, judiciary. Way, way too late to save Joel and Alan’s marriage.

Australian LGBTQI got an awkward glimpse of backbencher Dr Sharman Stone’s conscience last month when she replied to a constituent’s letter asking her why she’d voted against marriage equality in 2012.

I knew of this Victorian MP, federal member for Murray, because of the many voluntary sub-editing hours I gave in support of SPC Ardmona, the fruit canning company in Stone’e electorate, during the wave of No Fibs articles filed during the  2014 #SPCsunday campaign.

When she told the nation on the ABC that Tony Abbott and Joe Hockey were a pair of liars, Stone’s stance was the first eye-opening chink in the Coalition’s armour. I paid attention because I could see someone with something to lose taking a risk. 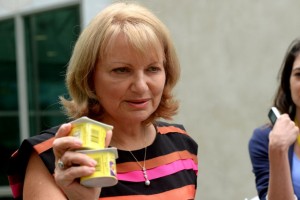 According to Stone, the imminent closure of SPC Ardmona was an unfolding tragedy: “I do not intend to speak in the media about the suicides and attempted suicides now occurring particularly among the orchardists, and for the sake of the families I will not talk about them publicly,” she said in an email.

“But believe me the loss of the last Australian fruit processor would be a human as well as a regional economic and national tragedy.”

But Stone had little such empathy for her correspondent Tilly Rose Goldsmith’s situation, replying that her conscience did not extend to upholding marriage as an option for Australian LGBTQI.

“The family implications of a marriage are totally different to the outcomes possible in a same-sex marriage i.e. not inferior but DIFFERENT” (Dr Stone’s capitalisation).

Stone’s response fell into the argument-breaking trap which invalidates childless heterosexual marriages, and it ignored how prone young LGBTQI are to suicide as a result of bullying, a subject Goldsmith had raised in her letter to the minister.

I took a small stand on Twitter after reading Stone’s letter. As far as I am concerned, overseas canned fruit is no longer inferior, it’s just DIFFERENT. Food for thought for SPC Ardmona workers when it comes to election time.

Too late to question my support for Stone’s cause. More fool me for not checking her marriage equality record.

Some good news came after July 1, 2014, when a swag of new Senators joined the debate and NSW Liberal Democrat Senator David Leyonhjelm spoke with the most clarity marriage equality advocates had witnessed since Kevin Rudd’s ‘road to Damascus’ essay in 2013.

There seems no urgency in Leyonhjelm’s stance on marriage equality.

Defining Australian LGBTQI as “second-class citizens” until we have full marriage equality, Leyonhjelm’s announcement that he would bring on a marriage equality bill nevertheless contained some big qualifiers – he would not bring a bill forward until there was a conscience vote across the parliament, encouraging Coalition senators to tow the line and warning that, with six years as a Senator, he would see his “libertarian” bill through.

The Senate got a glimpse of Leyonhjelm’s courage last week when he threatened to bring a disallowance motion against agricultural sector levy increases, a controversial issue which is dividing rural Australia, where compulsory industry levies on primary producers are seen by many as crippling taxes.

When it came to crunch time, Senator Leyonhjelm pulled his punch and postponed the motion. With another six years of his Senate term ahead of us, there seems no urgency in Leyonhjelm’s stance on marriage equality.

Six years will be far too late, Dave. Bring it on.

Although Gay Alcorn seemed to be chortling to herself at AME’s idea that marriage inequality was hitting the back pocket of Australia’s wedding industry, there is some merit in looking at boycotts as a way to lever the Australian parliament into legislating for same-sex marriage. 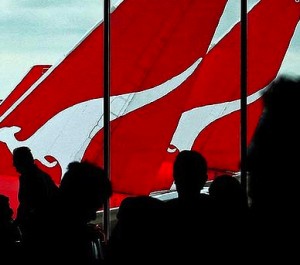 AME has a regularly-updated list of Australian businesses which uphold the validity of Australian gay and lesbian de-facto relationships and overseas same-sex marriages and civil unions amongst their staff and customer base. The list includes Rupert Murdoch’s News Corp, which puts paid to some of the claims about that company’s influence on Australia’s political landscape.

Major sponsor Qantas put corporate pressure on the Australian Opera until it sacked homophobic singer Tamar Iveri. Qantas also upholds the next of kin status of its staff and customers in same-sex relationships.

Corporate Australia has been acting on marriage equality for over 5 years. It’s getting very late, parliament.

At the lighter end, these news gathering services ask prayer groups to add LGBTQI advances to their prayer lists. At the heavier end, the content should probably be unpublishable in the public domain.

Fact is, there are widespread ‘faith boycotts’ encouraged by anti-gay advocates across the world, and Australia is no exception.

Before you write off the idea of the LGBTQI community boycotting anyone, name a single civil rights movement which succeeded without using the only language that moves postmodern communities into action: money.

Australian Marriage Equality is asking people to write to their federal MP, particularly those who voted against marriage equality in 2012. It takes 5 minutes and can be done via this automated email link.