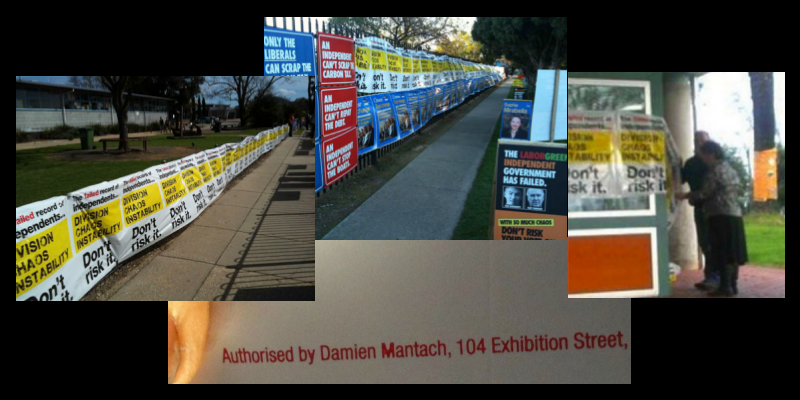 Tammy Atkins is a member of Voices for Indi, a community organisation based in the Indi electorate in Northeast Victoria. It was established by people seeking to reengage the local community with the political process. V4I is not a political party, instead it is a platform enabling open political dialogue and community engagement. In devising a regional vision statement, V4I’s consultation process empowered a course of action resulting in the election of independent Member of Parliament Cathy McGowan AO in 2013.

Polling day’s an opportunity to celebrate democracy and reconnect the public with politics, so voting should be a positive experience that encourages us to reflect on our ability to vote and have a say about how we’re represented. Based on feedback from supporters, Voices for Indi has made some suggestions to the Federal Parliament.

We’re hopeful changes can be made to the rules so that polling day becomes a more positive experience for voters and voting’s something we all look forward to.

When it comes to election campaigns, we think there should be a limit on the amount of advertising signage each candidate is allowed at polling stations. Think back to the last election, in Wodonga we saw whole school fronts swathed in ugly plastic wrap, including schools that weren’t polling places. Hundreds and hundreds of metres of fence line was emblazoned with emotive phrases like, ‘With so much chaos don’t risk your vote on an independent’ and ‘Don’t risk it’.

It was impossible to enter polling booths without passing repeated material potentially intimidating voters and possibly misleading them about the validity of their vote if they risked it by voting for an independent. Hundreds of metres of fences on both sides of the road screamed out that negative messaging. It’s not on.

What was particularly disappointing about this campaigning was the lack of ownership and transparency. Not one of the army of coreflutes, and not one of the pamphlets warning voters against supporting an independent, bore a party logo or a party name, not even in the teeny-tiny print of the authorisation messages. The Liberal Party must’ve known their negative campaign was a bad look – if they were proud of their slogans, wouldn’t they have identified themselves as the authors?

We also saw bucket loads of negative flyers, misleadingly coloured in the same orange as the Cathy McGowan AO campaign flyers, but warning voters against the very candidate whose brand the flyers played upon. These too lacked the Liberal Party logo and nowhere, not even in the five-point fine print, were the words ‘Liberal Party’ or the name of their candidate. There’s no justification for deceitful, negative campaigning. The public ought to be able to easily identify those candidates and parties who choose to go negative and monopolise polling booths with intimidating signage and campaign material.

Election material produced by political parties should have to include a reasonable sized copy of that party’s logo and the authorisation, which is an Australian Electoral Commission requirement, should either include the name of the party of which the person authorising the material is a member or the name of the candidate on whose behalf it is being distributed.

The photos provided to the inquiry show Indi’s polling booths were anything but welcoming to voters at the last Federal Election.

We’re hopeful that the Parliament’s inquiry will result in improvements to the current rules regarding campaign activities near polling places, especially those at schools, so the next Federal Election is a less intimidating and less misleading experience for the voters in Indi.

Read the No Fibs election day story related to this submission: https://nofibs.com.au/2013/09/07/desperate-mirabella-commandeers-available-poster-space-booths-security-guards/