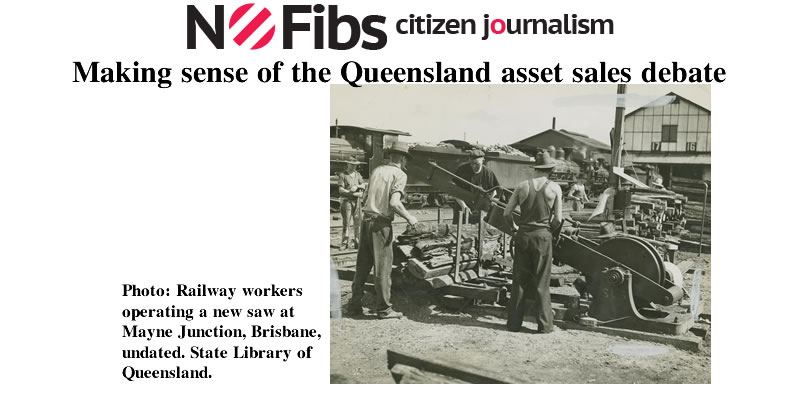 The asset sales debate is on the boil yet again in Queensland. 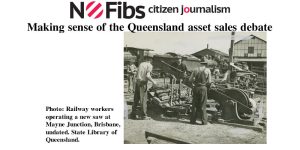 Nothing gets Queenslanders riled up like an asset sales debate. Yet, former Queensland Premier Campbell Newman and current Premier Annastacia Palaszczuk appear to have found some common ground. Both now agree that state owned land along railway corridors and marinas, abandoned university campuses and disused workshops should be offered to the private sector for re-development.

The list of properties extends from Southport on the Gold Coast to Cairns in far north Queensland. It would include such parcels as the disused Mayne rail yards in Brisbane. Money generated would be used to fund new projects such as Brisbane’s Cross-River Rail and the Townsville boardwalk.

Shortly after taking office, on March 5, 2015, Premier Palaszczuk said, “We are not going to sell those government-owned corporations that bring in massive profits.”

Premier Palaszczuk told the media yesterday, “Governments of both persuasions, their normal course of business transactions have involved the buying and selling of land.”

On the nightly news, Mr Newman chipped in with his support for the plan.

“It’s the right thing to do because this will create jobs and economic opportunity for Queenslanders,” he told 9 News Brisbane.

Where the two still differ is on the specific asset. Backed by unions, it is still the policy of the Palaszczuk Government to prohibit the sale of revenue generating assets such as ports and electricity networks.

Despite losing the election with his pro-asset sales platform, Mr Newman remains convinced that only a full scale sell-off is the way to go. In the wake of September’s sale of the Port of Melbourne by the Victorian Labor Government, he told The Australian that both the Queensland Liberal National Party and Labor need to show “political courage”.

“A Victorian Labor government has shown to the Queensland Labor government, but also the state LNP, what can be achieved and they now have the ability to use that money to take Victoria forward,” he said.

“Let’s be very clear: the Leader of the Opposition Mr Nicholls was the strongest advocate for a policy of asset leasing to bring in the money to create the infrastructure, jobs and opportunities for Queensland. I would have thought he would still see that as a sensible and appropriate way to go. But Labor needs to see the writing on the wall (as well).”

Queensland Treasurer Curtis Pitt immediately responded to this with a statement reaffirming the government’s position “not to sell income-generating state assets”.

“Unlike the LNP under (LNP Opposition Leader) Tim Nicholls we have a clear, well-known policy that makes good economic sense for taxpayers who continue to benefit from ongoing revenue streams and the essential services our key state assets deliver,” he said.

“Both Jeff Kennett and Campbell Newman assume Tim Nicholls now opposes asset sales – but if does he’s yet to say so.”

Yesterday, Premier Palaszczuk’s land asset sales plan was met with outrage from Mr Nicholls who accused her of lying.

“She has lied to the people of Queensland and no matter the weasel words or the spin they put on it this is still an asset sale,” he told Ten News Queensland.

He also responded online with an aggressive tweet which depicted Ms Palaszczuk during the 2015 election campaign declaring that no assets would be sold. His post triggered a string of online abuse in #qldpol directed toward the premier which continued throughout the day.

No matter how she dresses it up or what weasel words she uses, @AnnastaciaMP can’t run from the fact that she lied to Queenslanders. #qldpol pic.twitter.com/1UnVAdjHtk

“The Queensland Council of Unions is not opposed to the plan announced today to sell surplus state land as these assets produce no income for the state, no jobs for Queenslanders and provide no services,” Media and Communications Officer Brett Young said in a statement.

QCIC chief Nick Behrens told the media that, “We don’t believe that it should be considered a broken promise because ultimately this is a decision that benefits all Queenslanders.”

Queensland Executive Director of the Property Council of Australia Chris Mountford said in a statement, “The new strategy makes a very bold statement that the Queensland Government is ready and willing to partner with the private sector to transform surplus government land holdings into exciting new development projects. This will not only create jobs, and boost economic activity but generate exciting new urban spaces for local communities.”

Both the LNP and Labor have now gone to separate elections with a broad statement of “no asset sales”. Similarly, they have been consistent in continuing a land asset sales program.

In 2012, as the new Queensland Treasurer, Mr Nicholls espoused the value of land asset sales.

“What I also said very clearly before the election was that we would look at the state’s property portfolio,” he said.

In 2013 under the Newman Government, the former TAFE college site at South Brisbane was sold to developer, Metro Property. Mr Nicholls also sold seven buildings in Brisbane’s CBD for $527 million ahead of the new government building project, the ‘Tower of Power’. It was all part of an aggressive land sale policy which also saw Everton Park State School give up part of its grounds to avoid total closure.

Both parties can do a better job of explaining their plans to voters at election time. Broad statements like “no asset sales” only give ammunition to opponents in the future who will invariably respond with head-on-a-stick political attack ads. Glossy political advertising campaigns like “Strong Choices” don’t give the public the full details in order to make an informed decision.

Nicholls, the man who championed the Newman Government’s “Strong Choices” pitch, is now isolated and can only appeal to the public for support. Continued sale of derelict land may remain palatable to voters where the larger Queensland assets are not. In the shadow of two of her predecessors, Palaszczuk may well have politically gazumped Nicholls on this land deal but only a Queensland election will reveal her success or failure.