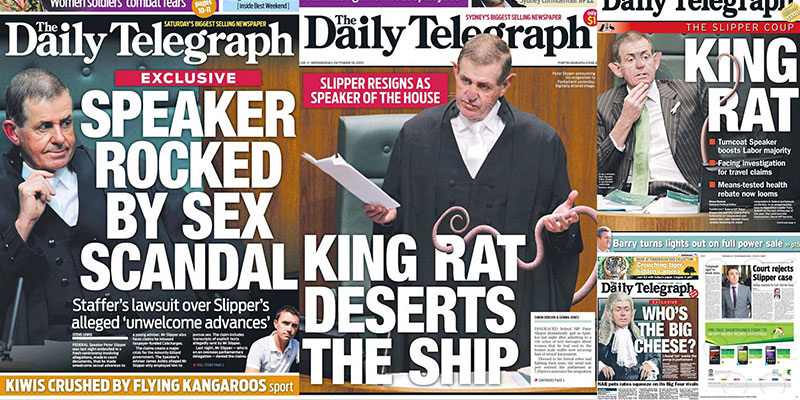 Soon after I took to Twitter in late 2012 I was horrified by the decision of the Daily Telegraph to bury its report of the December 12 Rares judgement dismissing James Ashby’s sexual harassment action against Peter Slipper as an abuse of Court process. The paper screamed headlines when it broke the lodgement of Ashby’s claim and pursued the case very, very hard (see The Daily Telegraph coverage of the Slipper scandal). I therefore made a complaint to the Press Council against that newspaper on December 22 and began a fascinating journey.

On June 12 last year I flew to Sydney at my own expense for the hearing of my complaint with a representative of the Daily Telegraph. The Press Council chief Julian Disney chaired a panel of community representatives. The meeting was permanently confidential, as was all documentation, until the final adjudication.

I was then advised that the adjudication panel had referred  the matter to the full Council meeting on August 29 for decision, rather than decide the matter  itself. This happens at the request of the chair or other panel members, usually because it is particularly important or might provide guidance on how the Council applied its principles. The media representative concerned, in this case Campbell Reid of News Corp, would not get the papers or be present when the matter was discussed.

The newspaper sought a review of the ensuing draft adjudication (also permanently confidential) and more documents were exchanged. I received the final adjudication on Monday this week, on a confidential basis until 6am today, when it was due for mandatory publication in the Daily Telegraph.

Here is the adjudication, followed by the documentation I am allowed to publish, since I thought readers and media practitioners, academics and journalism students may be interested in the process. The No Fibs archive of our pursuit of accountability in the Ashby saga is here.

The following adjudication has been issued by the Australian Press Council.

The Press Council has considered a complaint about an article in The Daily Telegraph on 13 December 2012, headed “Court rejects Slipper case”. The article reported a Federal Court decision on the previous day to dismiss as an abuse of process a legal action for sexual harassment brought against Peter Slipper MP by James Ashby. It appeared on page 17 of the newspaper and on the publication’s website.

Margo Kingston complained that the report of the dismissal on page 17 did not give it sufficient prominence in light of the newspaper’s very prominent and detailed coverage earlier in the year of Mr Ashby’s commencement of the legal proceedings and his allegations against Mr Slipper. The “exclusive” report on 21 April 2012 about commencement of the proceedings and Mr Ashby’s allegations had occupied all news space on pages 1 and 2 and most of page 3. On the next day, Mr Slipper had stood aside as Speaker.

The Daily Telegraph said page 17 was a prominent page and the top half had comprised the report on the dismissal, a photograph of Mr Ashby and an article on another aspect of the proceedings. It had also published reports about the matter on its website on the previous afternoon and in the next few days had published related reports online and opinion pieces in print. The story also was covered widely in other media outlets.

The newspaper said placement on page 17 was partly because of an unusually high number of other important articles on that day. The greater length and prominence of the coverage in April was due to the topic having much greater political significance as Mr Slipper was then the Speaker and his acceptance of that position had crucially influenced the balance of votes in the House of Representatives. It was also partly because the April story was an “exclusive”.

The Council agrees that the political significance and “newsworthiness” of an event are obviously relevant to the length and prominence with which it is reported. By the time of the dismissal of the proceedings, the political situation had changed considerably, especially because Mr Slipper had stood aside and then, in October, resigned as Speaker. Also, several unrelated news stories (especially the funeral of a police officer) clearly merited prominent coverage in the issue of 13 December.

The Council’s relevant Principle states: “Publications should take reasonable steps to ensure reports are accurate, fair and balanced”. The Principle does not necessarily require complete, or almost complete, fairness or balance. But a combination of factors meant that avoiding serious unfairness or imbalance was of special importance in this particular case.

First, the commencement of legal proceedings was a story the newspaper had “broken” in April, describing the allegations as “amongst the most serious ever raised” in Australian political history and “potentially deadly”.

Second, the allegations, and progress of the proceedings, were reported prominently on many occasions in ensuing months, often in the first few pages of The Daily Telegraph.

Third, dismissal of the proceedings raised important questions about Mr Slipper’s decision to stand aside as Speaker, which in the words of the newspaper happened “after The Daily Telegraph revealed allegations of sexual harassment and Cabcharge misuse – [which] means the government loses a precious vote in parliament”.

Fourth, readers of a daily newspaper of this kind can reasonably expect to be informed by it of such a key development as the dismissal of these proceedings as an abuse of process for political reasons, especially when it had previously given the matter great prominence. In the circumstances of this case, it is not reasonable to assume that readers who saw the very prominent coverage across pages 1-3 of the 21 April edition were likely to see the very much less prominent report of the dismissal on page 17 of an edition eight months later or see the report on its website. It also is not reasonable to regard the newspaper’s obligations of fairness and balance as having been met by the story being widely covered in other media outlets.

The Council upholds the complaint due to the very stark difference between the detail, tone and prominence of the newspaper’s initial coverage on 21 April and of its report on 13 December of the dismissal. The later report did not need to match the prominence and detail of the earlier report by, for example, being of similar length and on the same pages. But in the circumstances of this case the degree of difference was so great as to constitute a clear breach of the Council’s Principle concerning fairness and balance.

It is not the Council’s role to say precisely how this unfairness or imbalance should have been avoided. There were clearly a number of possibilities between which the publication could choose.

Additional note (not required for publication by the newspaper):
The newspaper said that the prospect of an appeal by Mr Ashby influenced its decision not to give the issue more extensive treatment. The Council notes, however, that it is common and accepted practice to report court decisions, sometimes in great detail, even though they may be subject to an appeal. The newspaper also quoted from an Advisory Guideline of the Council on bias. The words which it quoted relate to bias and fairness in publishing different political opinions, but this adjudication relates to fairness and balance in the reporting of facts.

Relevant Council Principles (not required for publication by the newspaper):
This adjudication applies part of General Principle 1: “Publications should take reasonable steps to ensure reports are accurate, fair and balanced.” [/dropshadowbox]

2. Press Council Statement of Issues, with Daily Telegraph response, my reply and their rejoinder

4. The Daily Telegraph request for review of provisional adjudication

Press Council ruling is on p 29 of @dailytelegraph, its trashing is the entire editorial with pic of me – online? pic.twitter.com/hROqqyy4EC

The Tele slips on Slipper

Is press freedom a licence for unfair and unbalanced coverage?