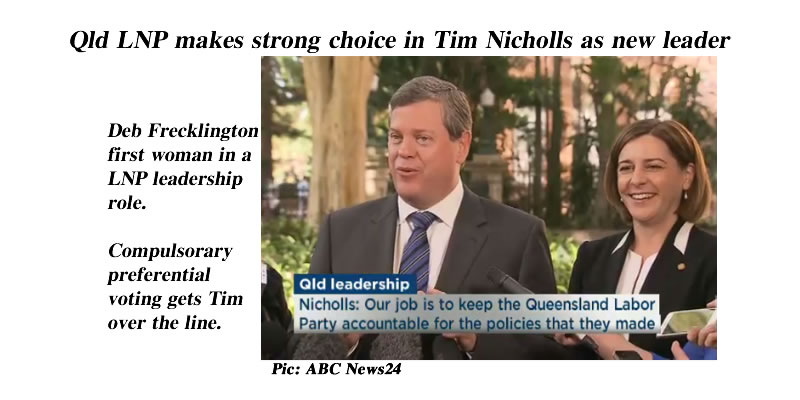 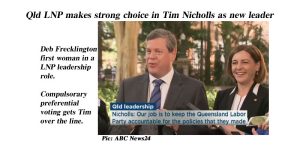 Liberal National Party Opposition Leader Lawrence Springborg has been defeated in a challenge by MP for Clayfield, Tim Nicholls.  Mr Springborg mustered 17 votes in the first round over Mr Nicholls on 14 and a third challenger, Tim Mander, on 10. However, it was the second round of preferencing that delivered the leadership to Mr Nicholls,  with a final score of 22-19.

Contradictorily, the LNP had complained bitterly in the weeks leading to up to the spill about the reintroduction of compulsory preferential voting (CPV) to the state’s electoral system. Queensland Government Deputy Premier, Jackie Trad, quipped that the LNP would likely prefer to flip a coin.

Now underway – #LNPspill! Resolved by ballot using CPV or will they end up tossing a coin? #qldpol

Tim Nicholls is the new LNP leader. Saw off Lawrence Springborg in second round. 22-19. Mander knocked out in first. #qldpol #LNPspill

Three of the four cross bench MPs, Katter’s Australia Party MPs Rob Katter and Shane Knuth as well as independent Rob Pyne, had openly expressed support for Mr Springborg. In a press conference after the spill, the two KAP MPs expressed disappointment in having lost a rural linked opposition leader in Mr Springborg to a city based one in Mr Nicholls. When asked about how they would go working with the new leader, the pair told the media that Mr Nicholls had been hard to deal with as Treasurer and as architect of the ‘Strong Choices’ asset sales plan under the former Newman Government.

“We have to work that out because under the Newman government, Tim Nicholls was the Treasurer, we found it very difficult to work with him at the time. He has indicated that he is prepared to move on, so we have to see what pans out after this event,” Mr Knuth said.

'We do have some concerns about combative nature of last govt. We will not support assets sales' #9News pic.twitter.com/J0uHjK35Dh

As recently as February, after a tense party room meeting, Mr Nicholls had expressed his support for Mr Springborg.

“The job of the opposition is to make sure we hold the government accountable and that’s what we’ll be concentrating on doing under Lawrence Springborg’s leadership,” he declared.

At his first press conference as leader, Mr Nicholls wasted no time in picking up Mr Springborg’s four-word slogan of Labor being ‘frozen at the wheel’.

“This is about taking the fight up to a ‘frozen at the wheel, incompetent Labor Government. People used to go to work without worrying about what their state government was doing to them but now people are coming up to me as I travel the length and breadth of the state and they’re going to their coffee shops, they’re shopping in the shopping centres, they’re taking their kids to school or to sporting events and their concern about what’s not happening in Queensland and they look at New South Wales and they look at Victoria and they see what is happening there and of course they ask, ‘why?’. And the reason is we have a frozen at the wheel Palaszczuk-Labor Government,” he stated.

MP for Nanango, Deb Frecklington, was elected unopposed as Deputy Opposition Leader replacing John-Paul Langbroek. An inexperienced Ms Frecklington was enticed by reporters to step up to the microphone and was asked if she was nervous about her new role.

“Absolutely not,” she replied.

Ms Frecklington highlighted the bush as being of her main concern.

“My priority is all about rural and regional Queensland,” she said.

After a few questions, Mr Nicholls interjected with, “I’ll take over from here.”

However, the media wanted to know more and she took to the microphone again.

“This is a ginormous state. There’s a lot to do and we really just need to get rid of this Labor Government so we can get everyone back to work.”

When asked by 7 News Queensland’s Patrick Condren to tell voters a bit more about herself and her farming background, Mr Nicholls prompted her to answer with, “read the paper”.

“Yes, you could read the paper,” she mimicked as Condren continued to seek more information.

Over his long career, Mr Springborg has led as opposition leader in four separate terms. In a joint statement, he and Mr Langbroek thanked the party and were confident of a LNP victory at the next election.

“We are very confident Tim Nicholls and Deb Frecklington will deliver for Queenslanders at the next State Election with an LNP victory.”