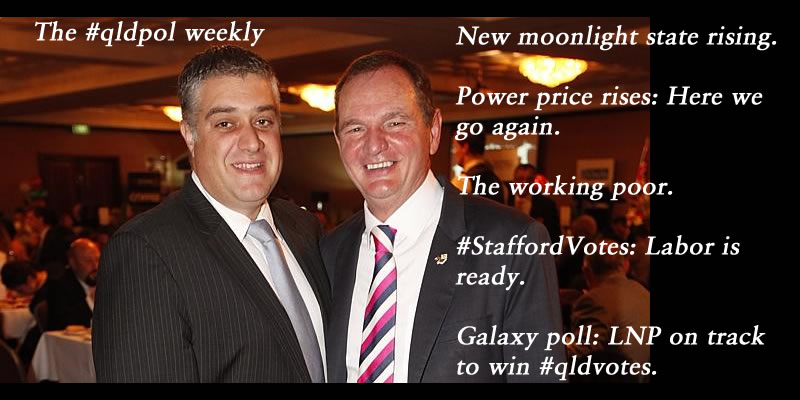 Galaxy poll 55 per cent to LNP.

No one seems able to curb power price hikes in Queensland, least of all Premier Campbell Newman. At the 2012 election, he pledged to lower them and took office announcing a freeze for one a year.  However, the result was a price power bulge of 26 per cent when the freeze thawed as providers caught up for lost time.

This week, the Queensland Competition Authority (QCA) announced an increase of 13.6 pc, around an extra $200 per year. The rise also includes a sneaky 66 pc increase in the daily service charge, whether a connected household is using power or not.

Energy Minister Mark McArdle claims to have a plan, no doubt it’ll involve asset sales to increase competition to drive down prices under powerful market forces. Queensland may find out at budget time exactly which utilities the Liberal National Party (LNP) intends to sell should it win the next election.

For the moment, it was the same script from McArdle Queensland has heard for the last two years. Everything was Labor’s fault; down to the carbon tax and the solar rebate scheme.

Yet, a Newman Government scheme to move users to the time-of-use tariff twelve has failed to attract more than 250 households. The discounted off-peak plan comes with hefty fixed fees & higher than normal pricing at peak time. For this type of plan to work, households would need to adopt a strict regime of not using electricity when the bulk of Queenslanders are.

4BC Brisbane: Gerard Ledwich from QUT explains what is driving up power bills.

In an interview on December 11, 2013 Gerard Ledwich from QUT explained that it was the electricity infrastructure that comprised half of the bill. As network costs are averaged out for all users, he suggested a differential tariff system so that low usage homes are not funding the costs of higher ones.

Queenslanders will always complain about the rising cost of power bills but it’s Newman’s election pledge to fix it that is ringing loudly across the electorate at the moment.

Here’s where your money’s going when you pay your power bill @9NewsBrisbane #qldpol pic.twitter.com/PYKAa4Hoja

As people queued for food, it looked like a scene from a third world country. It was the opening of ABC 7:30 Qld’s report on Queensland’s surging power prices. The scene is replayed every day at one of the many dispensaries across Queensland.

Politically motivated blame over the carbon tax, green schemes and the solar rebate scheme doesn’t reveal the true nature of the problem. Queensland’s new working poor are using all of their income to pay their mortgages or rent, utilities and multitude of insurances. With next to nothing left from their pay packets, they are increasingly relying on food banks to make up the difference in basic groceries.

@612Brisbane also covered the problem this week with focus on Brisbane’s south. With limited supplies, emergency relief providers are having to limit aid to the areas closest to them.

Compounding this is the high level of Queensland’s unemployment, up from 5.5 pc to 6.3 pc since Newman took office. The government frequently boasts huge numbers of jobs created but the bulk of these are part-time jobs. Long term part-time employment masks the underlying under-employment problem as families struggle to bring home enough to cover budgets.

ABC News Qld: Treasurer Tim Nicholls is not so open to increasing gambling taxes and mining royalties despite suggestions from Queenslanders.

Galaxy poll 55 per cent to LNP

The latest Galaxy polling shows the LNP is on track to to win the Queensland election in 2015 with 55 pc of the vote after preferences. The Newman Government is likely to lose twenty seats but not enough for Labor to form government.

At the next general election, Labor would need to pick up thirty-seven seats to add to their existing eight to reach the magic number of forty-five.

Premier Campbell Newman’s approval rating is down slightly but he is still preferred premier to opposition leader Annastacia Palaszczuk, 48 pc to her 33 pc.

The Courier Mail state political editor, Steven Wardill, puts the government’s slight rise in primary vote from 41 pc to 43 pc to a cessation of negative stories about Newman’s anti-bikie laws, the Vicious Lawless Association Disestablishment act (VLAD) which led to a multitude of genuine motorcycle riders being stopped and searched by Queensland police. Support for the laws increased from 48 pc in February to 56 pc.

This contradicts the government’s own $6 million “Strong Choices” media campaign which just three weeks ago showed most would prefer to increase gambling taxes and mining royalties, over privatisation. The “people’s budget” ended last week after a flood of online, television and newspaper advertisements. Perhaps a sign of the advertising blitz to come in the lead up to election 2015.

Asset sales are a key election platform for the government, promising to take the issue to an election to obtain a mandate. However, at the recent Council of Australian Governments (COAG) meeting, all states and territories signed an agreement with the federal government to sell and recycle assets in exchange for funding for new projects.

A day after LNP MP for Stafford, Dr Chris Davis resigned from parliament, Labor was first out of the blocks campaigning on the streets with star candidate Dr Anthony Lynham.

Lynham is a renowned maxillofacial surgeon. Having seen the damage first hand from alcohol fueled violence, he is a strong campaigner for earlier closing times for pubs and clubs matching Labor’s policy.

Political analyst, Dr Paul Williams from Griffith University predicts a Labor win and a swing of ten to twelve per cent against the government.

Have your say and bookmark the NoFibs byelection for Stafford blog here. 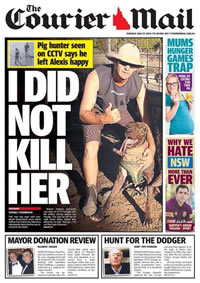 It started to report on the findings of the New South Wales Independent Commission Against Corruption (ICAC) and the links into Queensland.

(NoFibs began to collate reports on the findings in April, 2014. You can read more at; “Cash for Campbell, Newman named in ICAC inquiry”).

The story made the morning headlines on @612Brisbane and an interview with Mayor Pisasale ensued.

$7,500 in political donations had been made to his Mayoral electoral fund by AWH, a company which is currently at the centre of an ICAC investigation. Pisasale and Di Girolamo had been photographed in 2008 at Brisbane’s Il Centro restaurant but the Mayor could not recall any details of conversations.

It was also revealed that Pisasale also received donations from a company called Sekisui House into a company of which he was president called Forward Ipswich. This was then used for Pisasale’s mayoral election campaign.

Sekisui House also paid AWH to perform a $250,000 consultancy on a water plan for its’ Ipswich’s Ripley Valley development.

The Courier Mail also revealed a series of emails which showed Pisasale as the meeting arranger between Sekisui and LNP president Bruce McIver. Premier Campbell Newman also met with Pisalae and Sekisui House on June 21, 2012.

However, Ipswich Council maintained it was the victim of false claims made by Di Girolamo at ICAC.

Further investigations by ABC reporters Mark Solomons and Matt Wordsworth showed just how big the donations between South-East Queensland Mayors and developers where.

All of this got the Queensland Government’s attention and it announced an investigation via the Local Government Department.

While there are no illegalities with donations from developers in Queensland, in an interview with ABC 730 Qld, former Electoral Commissioner Bob Longland likened them to money laundering. They give some people access to a political figure or influence in future political decisions.

“People don’t give donations for no particular reason,” he said.

Councils only have to disclose donations every four years after an election has been held. In the age of the internet, Longland argues all political donations should be channeled through a central government body which can publish the transactions online within 48 hours.

So what of Queensland’s Crime and Misconduct Commission (CMC) in all of this?

Campbell Newman was quick reassure @612Brisbane listeners that there was nothing to see here. He reiterated that he’d written to the CMC and received a reply that nothing needed to be investigated on the revelations in ICAC.