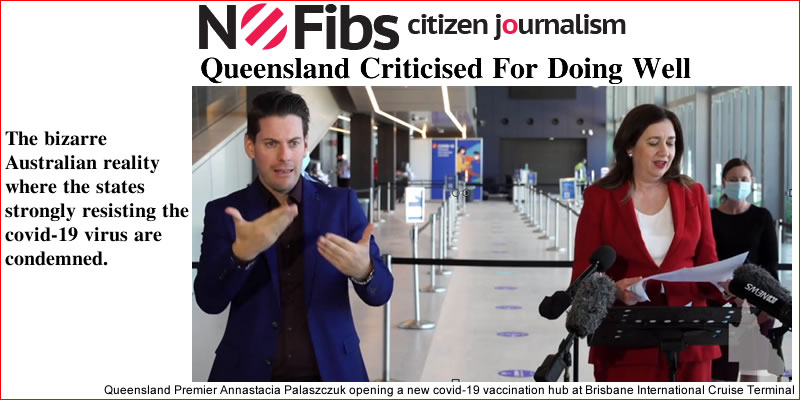 The Australian has accused the Queensland premier of ruining holiday plans reporting that she had said, “lifting border restrictions even after vaccine coverage reaches 80 per cent would be a “backward” step.”

However, Thursday’s press conference didn’t exactly pan out like that. The premier was responding to a series of questions on the additional rewards Queenslanders could expect when the 80 percent vaccination rate was achieved and what the roadmap would look like. Ms Palaszczuk explained that if Queensland were to adopt that measure from the covid-19 national plan it would actually take the state backwards in terms of freedoms. Sadly, Victoria and NSW were now vaccinating to recover their freedoms whereas Queensland was in a different position. “We are getting vaccinated to protect our freedoms,” she added.

Predictably, The Courier Mail (CM) had her as the Grinch cancelling Christmas. Just a bit of fun, no doubt.

Premier Palaszczuk was once again accused of backing out of the national plan with the CM repeating Deputy Prime Minister Barnaby Joyce’s slur about hermit kingdoms.

A series of questions yesterday had led to this front page & the subsequent article. Some journalists seemingly expected the premier to transform into the Australian prime minister and set a series of dates for international destinations to open up and arrivals into the country to begin.

Premier Palaszczuk did note that Australia appears to be in a backwards reality where the states that are doing well against the pandemic are copping constant criticism. She went on to explain that new information from the Doherty Institute will be supplied to National Cabinet in the next week which will enhance the national covid-19 plan.

Earlier this month, Premier Palaszczuk had asked National Cabinet for more information from the Doherty Institute on unvaccinated children.

Federal Health Minister Greg Hunt revealed this week that analysis of Pfizer trials on vaccinated 5-11 year-olds would be undertaken by the Therapeutic Goods Administration (TGA).

Revealed today in The Guardian, Queensland and other states and territories are expected to experience a shortfall in Pfizer deliveries for October.

Made into the Grinch yesterday, Premier Palaszczuk was today being accused of singling out India as a travel destination. However, it wasn’t the whole story on Thursday.

During the entirety of the press conference, she also spoke about travel to and from New Zealand and her reent experiences in Japan. As she comments above, she’s not the Australian government. It’s up to the prime minister with national cabinet to set the destinations people can travel to and from once vaccination levels reach a sufficient level.