Response from Origin Energy not enough: @SavLance75 comments on #CSG 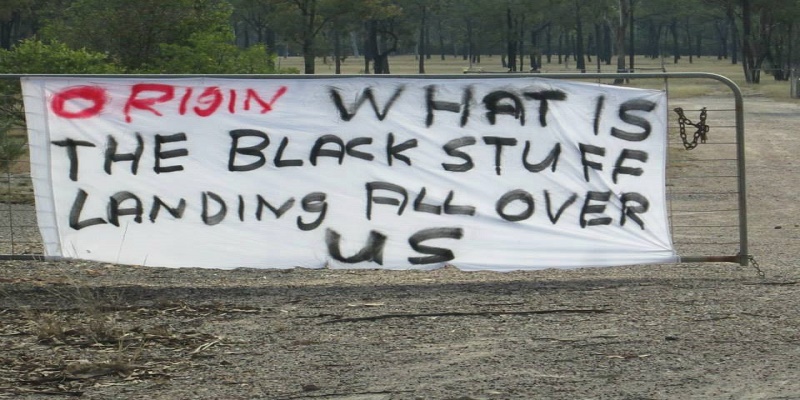 Rob Rimmer is a freelance writer, editor and journalist based in Brisbane, Queensland. He is passionate about social justice, community development, and ideas which unite and inspire. As a contributor to No Fibs, Rob's particular focus is on bridging the urban-rural news and media divide at grassroots level, beginning with his beloved home state of Queensland.

As part of the research undertaken for No Fibs recent article #CSG science provides no easy conclusions, posted on September 15, this writer addressed several questions to representatives of Origin Energy regarding their Ironbark coal seam gas (CSG) project and local landholders the Ansfords, who believe they may be suffering adverse health and environmental impacts due to their close proximity to ongoing CSG operations.

The response sent to this writer by Chris Zipf, senior external affairs and internal communication manager for Origin in Queensland, provides an insight into the kind of response landholders and community members facing CSG developments on their properties or in their local area can expect when asking legitimate questions: polite, evasive, and entirely unsatisfactory. Those in the path of CSG expansion should take note of the fact that the Ansfords live directly across the road from Ironbark and within the boundaries of the tenement, sandwiched between Ironbark on one side, and Queensland Gas Company (QGC)’s “Kate” tenement on the other. The only way they could better fit the definition of “stakeholder” is if these operations were occurring on their property itself — a possibility which Origin has not yet ruled out. 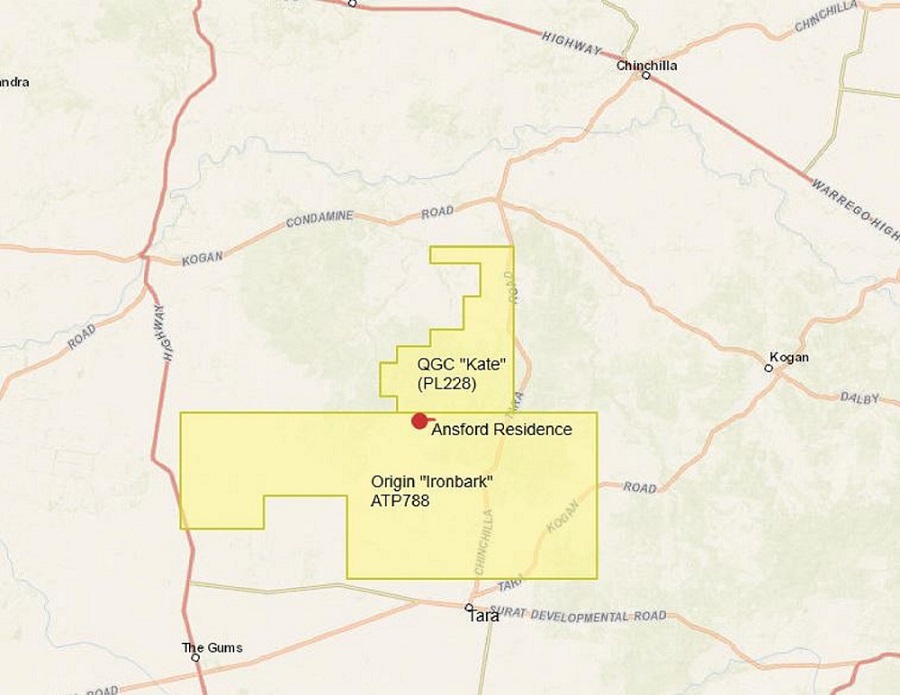 Screenshot of map constructed at myminesonline.business.qld.gov.au

Here, Origin answers respectful questions concerning the health and well-being of Australian citizens with a statement which adds a few extra sentences to an already-circulated media release. They completely avoid answering several of the questions, all of which arose from personally-addressed letters sent last year to the Ansfords — including, importantly, questions regarding the company’s own undertakings to liaise further with Queensland’s Department of Environment and Heritage Protection (DEHP) regarding test results, as well as questions regarding the air-monitoring which Origin apparently carried out over a six-week period in 2013.  The Ansfords themselves have seen no evidence of any such liaising with DEHP, nor any air-monitoring data. To date, no further study has been carried out at all on their property apart from private research funded by donation from concerned citizens.

Reassurances are then offered based on a peer-review of a limited study which — as explained in detail in the abovementioned No Fibs article — at no stage purports to offer conclusive results regarding the “residue” in question, and in fact states clearly (see “Section 3.2.3. Residue Analysis”) that not enough of the residue was collected to demonstrate its origin at all.

To say that the methodology of a “preliminary site investigation” is sound means nothing in this context; in fact, statements like this are little short of intentionally misleading, given that their intention is to reassure a family that its health is not at risk. There is no value whatsoever in the knowledge that a study has been carried out correctly, if that study is by its very nature incapable of finding the cause of their complaints. Rather, it appears as if Origin expects the Ansfords to be awed into acceptance of these inadequate efforts by the addition of further jargon and official-sounding company names.

The Ansfords’ repeated complaints and public statements regarding the health symptoms suffered by all four members of their family are conveniently side-stepped. The public outcry surrounding the “black rain” story may have finally prompted Origin to act, but in continuing to address this single issue as if it was the Ansfords’ only problem, and in neglecting to examine the other potentially far more serious health and environmental impacts as reported, Origin displays a deliberate, indeed tactical, disingenuousness.

The reference in Origin’s statement regarding Queensland Health’s Coal Seam Gas in the Tara Region report is a markedly similar exercise in public relations, a thorough unpacking of which would require a separate article (although No Fibs reporter Katherine Marchment went some distance towards doing so in October 2013 with her excellent article Conflicts of interest, Tara data and baseline studies). Suffice to say here, though, that the Tara Region report is another example of a “preliminary” study which has since been presented by unconventional gas companies, the Queensland Government, and their supporters in the media as “conclusive” when it is nothing of the sort.

Less-publicised since have been the report’s recommendations for further study into the matter, and the fact that these recommendations have been categorically buried by both government and industry. Queenslanders in close proximity to the Western Downs gasfields who continue to suffer similar complaints to the Ansfords — including numerous children — have ceased to hope that these recommendations will be implemented in time to prevent the potential permanent damage to their health which has been flagged repeatedly by independent professionals, including scientists and doctors. This writer has spoken personally to several families who consider themselves the guinea-pigs in a vast and poorly-controlled experiment, the results of which are unlikely to ever be peer-reviewed. 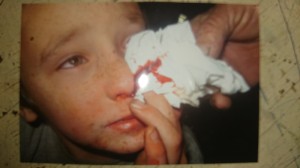 Steve Ansford permitted No Fibs to use this image of his son Dusty suffering a nosebleed, which the Ansfords say have become frequent since CSG operations began in their local area.

The environmental consultants involved in this study have presented a theory based on the best evidence they could gather within the clearly-stated limitations of their contract — no doubt combining their experience with these results to form an opinion of the residue’s origin. As certain as these consultants may be of the professional opinions formulated within the parameters of this preliminary investigation, any Australian who paid a modicum of attention during foundation science classes can see that this is no justification for assigning a “Case Closed” label to the Ansfords’ complaints. In the absence of continuing public pressure, however, this appears to be exactly Origin’s intention.

Australians in the path of CSG expansion must question whether they, in the Ansfords’ position, would be satisfied with the reassurances of public relations specialists when seeking guarantees regarding the health and well-being of their family.

Please see below for this writer’s complete list of questions, and a full cut-and-paste of Origin’s emailed response:

Re: Attachment 1 — your letter dated September 6 2013 — you state that Origin will continue to liaise with the Department of Environment and Heritage Protection (DEHP) regarding Origin’s findings and test results.

Has this been done, and if so, what were the results of these liaisons?

Has any further action been taken as a result, and if so, can you please inform me as to where I might find records of these actions / tests / monitoring efforts?

Re: Attachment 2 — your letter dated October 28 2013 — you state that Origin will continue a program of air monitoring for up to six weeks after the collection of initial residue samples, including regular on-site inspections, and that this monitoring would form part of a broader monitoring program to be carried out on the Parkers’ property and at the Duke 2 pilot well site.

Can you confirm that this program of air monitoring was indeed carried out, and if so, inform me as to where I might find records of the same?

Re: Attachment 3 — your letter dated November 28 2013 — you refer to a “preliminary summary of findings” by consultants GHD (this preliminary site investigation is available online) and “preliminary conclusions” based on GHD’s findings and on “our [Origin’s] own investigations.

Can you release to me the written results of Origin’s own investigations into this matter, or let me know where these may be found for confirmation?

Does the “confidence” mentioned in your letter  regarding Origin’s assertion that its activities have nothing to do with the health and environmental complaints made by the Ansfords (and others) amount to a guarantee that residents living within, or adjacent to, the Ironbark Project site are NOT at risk — or that they will be duly compensated if they are later found to have been impacted by Origin’s coal seam gas operations?

Can you inform me whether these preliminary investigations and conclusions have been followed up with more comprehensive testing and/or monitoring on the Ansfords’ property, and/or on the Parkers’ property, and/or at the Duke 2 pilot well site, and/or within the immediate vicinity of the Ironbark Project tenement area?

Does Origin intend to carry out further environmental testing and/or monitoring in the vicinity of the Ironbark Project tenement with a view to ensuring that the health and safety of the residents of nearby estates is not at risk?

Does Origin intend to purchase the Ansfords’ property, or any of the rural-residential estates adjoining “Ironbark”, should testing and/or monitoring reveal in the future that the health and environmental impacts described by residents proves to be linked to Origin’s coal seam gas operations?

What is Origin/APLNG’s policy on the acquisition of residential or agricultural land to facilitate its coal seam gas operations in Queensland?

Does Origin have any further comment to make with regard to the health impacts which the Ansfords, Parkers and others claim have continued throughout the 12 months since Origin carried out these preliminary investigations?

“Testing and analysis carried out by independent environmental engineering company GHD concluded that the residue is naturally occurring and caused by psyllid insects or lerps.

“This same testing and analysis also found that the soils on the properties were normal, and met the requirements of the national environmental protection measure health-based guidelines applied to soils in all residential areas including outdoor playing areas and soil used to grow vegetables.

“To further verify the science and the above findings, Origin commissioned Environmental Risk Sciences Pty Ltd (enRiskS) to conduct an independent review of the sampling and analysis work undertaken by GHD.

“This subsequent scientific peer review further supported the methods and conclusions drawn.  It also found there is no connection to nearby gas operations and that natural gas combustion could not physically produce a sticky residue that could fall out of the air some distance away.

“Results of the GHD investigation and review by enRiskS are published on Origin’s website  www.originenergy.com.au/4406/Ironbark

“This work has been undertaken with the co-operation and consent from the Ansfords, and we thank them for that.

“In the case with Ironbark, one property has been bought for future infrastructure needs. Origin has no plans to purchase any further property in the area.

“The connection between CSG and health claims has been investigated by Queensland Health who found no link.”