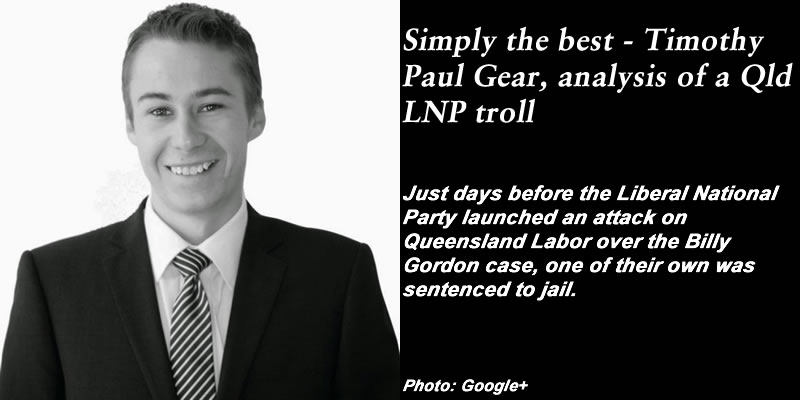 Just days before the Liberal National Party launched an attack on Queensland Labor over the Billy Gordon case, one of their own was sentenced to jail. 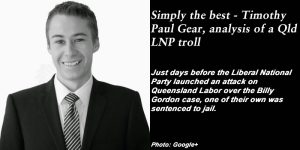 The Courier Mail reported in its Sunday Mail edition that Timothy Paul Gear, 23, had been sentenced to 12 months imprisonment, fully suspended for 18 months for child sex offences. Gear was the Chairman of the LNP Currumbin Branch and Secretary of the Gold Coast LNP. He had aspired to be a future member of parliament.

The Gold Coast remains a power base for the LNP with voters religiously voting blue. At the 2015 state election, despite MP for Mermaid Beach Ray Steven’s “chicken dance”at reporter Dave Donovan, despite MP for Broadwater Verity Barton’s three confessions to driving without a license and despite the huge swing to Labor, the Gold Coast seats remained barely dented.

So it came as no surprise that Gear, a school captain at Elanora State High School, began his political life with the LNP. He became a protege of LNP MP for Currumbin and former Newman Government Tourism Minister, Jann Stuckey. In 2008, Stuckey praised him in her online newsletter, saying, “Member for Currumbin, Jann Stuckey today congratulated three local students Timothy Gear, Benjamin Naday and Leigh Moran on their selection for the 2008 Queensland Youth Parliament.”

To Stuckey, he was simply the best. Hansard showed that on May 31, 2012, in an Address-in-Reply speech, she told parliament, “To my fantastic campaign team—Richard Stuckey, Carley McNeil, Tim Gear, Peter Barrett, Ben Naday, Anne and Robert Wright, Virginia Freebody and Minna Knight: you are simply the best.”

However, in 2014, a dark side to Gear began to emerge. He publicly admitted to trolling online. In political terms, trolling is the process by which a person uses social media to attack political opponents using anonymous accounts. These apparatchiks tow the party line by reposting messages from politicians of their party. They also attempt to dissuade other social media users from promoting ideas against the party by engaging in personal attacks, use of foul language and propaganda.

Claims that all  sides of politics do it have been made before but no one has been so brazen as Gear about it. Labor candidate for the state seat of Burleigh Gail Hislop had blocked a Young LNP member from her facebook page. In response he threatened to, “set up troll accounts closer to the election”. It was then that Gear responded to this by writing, “We all have troll accounts”. The startling confession suggested there existed a network of political trolls on the LNP side.

At 21, he’d been caught by police posing as underage children in an online operation to catch sex offenders. He was charged with two counts “of trying to procure a child under the age of 16”. He entered a guilty plea. A spokesman told The Courier Mail that Gear had resigned from the party before the charges were known to the party.

Gear, now 23, was sentenced on March 16, 2015. He had made two previous court appearances, one in December of 2014 and another during the election campaign in January. His facebook page showed him campaigning with former LNP Premier Campbell Newman, former LNP MP for Brisbane Central Robert Cavallucci and a pre-election photo of Federal LNP Senator for Qld James McGrath. Sources have also told NoFibs Gear appeared with Stuckey during the campaign at Elanora State High School.

A senior member of the Gold Coast LNP, a declared campaigner for a Newman Government Minister and a self-confessed troll had been convicted of a sex crime. Yet, there was no media coverage of any court appearances or the allegations during or prior to the 2015 election. The report of his crimes only appeared 34 days after he had been sentenced.

What had elapsed during all that time?

On March 27, 2015, eleven days after the sentencing, the LNP began its assault on the Labor Government, pushing for a by-election over the allegations made against MP for Cook, Billy Gordon. The Courier Mail launched a barrage of anti-Labor front pages at the Palaszczuk Government. Speaker of the House Peter Wellington described the paper as attempting to “discredit this government”.

So, over the two year period of Gear’s case, had the media simply missed the whole story? Possibly, but it seems unlikely when every week on the nightly news and online we hear the court reports on people we’ve never heard of.

Conspiracy theories abound. The deception is almost water tight, however, there is one clear clue in The Courier Mail’s article which shows the outlet must have known all along of the Gear case. It’s the photo of him smoking with the caption, “Timothy Paul Gear after being convicted of child sex offences.” The photo could only have been taken by someone that knew Gear would be appearing on March 16, 2015 for sentencing. It would appear the paper embargoed the story so as not to distract from the upcoming LNP attack against Labor over Billy Gordon. 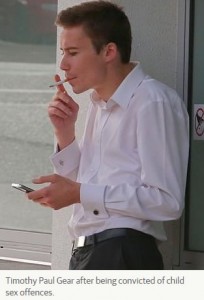